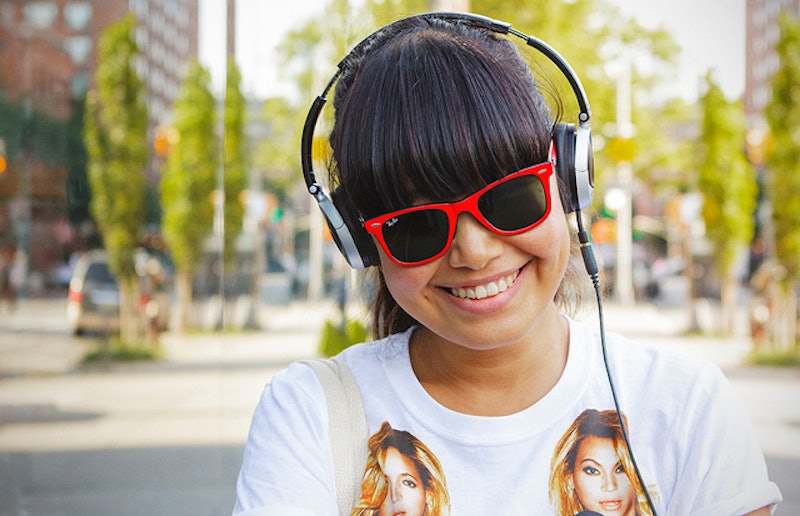 There's no denying the effects of pop culture on society. It's an important part of our personal lives, too. If you can't notice this when reflecting on your own interactions with pop culture, just read this passage from an essay by incredible transgender activist and pop culture critic, Janet Mock: "Pop culture may be dismissed as lowbrow, but to me it is the culture that matters most. Popular culture helped raised me."In that essay, as well as in her memoir Redefining Realness: My Path to Womanhood, Identity, Love & So Much More, Mock discusses the important role that Beyonce Knowles had on her development as a young transwoman and feminist. Understanding Mock's, or anybody's, entire personality means understanding the pop culture that they love and that nurtured them. I know that nobody knows the real me until they've understood how 90s-early 00s pop punk combined with Destiny's Child and the Spartan Cheerleaders sketch from Saturday Night Live formed the grownass woman you see standing in front of you today.With that being said, it's important to know a few things about dating a pop culture loving lady. Her affinity for it is serious, and you need to respect it as such. As one of these gals myself, I'd like to provide you with a little insider knowledge about what it's like to date a woman who lives for the pop cultural zeitgeist and doesn't care who knows it:

1. She is very aware of what's going on in the world, so don't you dare think that loving pop culture makes her vapid.

One of the most obnoxious and patronizing things you can do to a woman who loves pop culture is assume that it is the only subject about which she could possibly have any interest. By that I mean, just because your partner is up to date about the wisdom shared by Tina Knowles in paparazzi videos, don't think for a second that she isn't following news about the 43 missing Mexican college students, or that she is ignorant about important injustices or political, scientific, and artistic developments. She knows that her devotion to certain pop culture figures is kinda funny, and she can pay attention to more than one thing at the same time and appropriately discern which is a more pressing social issue. A good relationship with pop culture is a complex one, and your partner is complex.

To echo Mock and legendary feminist scholars like Bell Hooks once again, pop culture is important. Whether your partner wants to discuss the Bechdel test, #Gamer Gate, the lack of people of color represented in the media, the frequent occurrences of rape culture in television, or the heteronormative representation of characters' sexualities in films, it will be an intelligent and engaging conversation with which you'll want to keep up. You gotta stay sharp with a pop culture connoiseur. On that same note, do not shame your partner for engaging in problematic media while claiming a progressive or feminist identity. She is highly critical of the media she enjoys, and it is exhausting. It can all be summed up in this brilliant headline by The Onion: "Woman Takes Short Half Hour Break From Being Feminist to Enjoy TV Show." Can she live?

If your partner finds opportunities to quote everything from older gems like Bill and Ted's Excellent Adventure to the latest sketches from Key & Peele in mundane conversations, consider yourself lucky. Your discussions will always be exciting, either because you'll have no idea what she's talking about and get an in depth arts and pop culture education, or because you'll have fun joining her in her daily worship.

She knows people laugh at her for still knowing the words to “He Loves U Not” by Dream, but she is a self-assured woman who loves her haters and your judgment will not silence those vocals, so just let her do her thing. (pro tip: if you can join her in singing along, you will be rewarded for it. *wink*)

One woman's guilty pleasure is another woman's thing she just likes and it's not that big of a deal. I dare say it is possible to love respected artists like Prince or The Dirty Projectors while also loving artists from your youth like 3LW or Hoku for extremely different reasons, and not feel any guilt about it thankyouverymuch. Another plus of dating a pop culture loving lady is she'll raise your consciousness to the point of questioning what a guilty pleasure really is in the first place. Hint, it's a #SOCIALCONSTRUCT. (pro tip #2: never refer to the Spice Girls as a guilty pleasure unless you had planned on sabotaging your relationship.)

6. She'll want you to engage in her favorite media with her, but you don't always have to enjoy it.

Trust me, you are dating a smart woman and she knows that not everybody is as fascinated by a bizarre and disturbing documentary about 80s singer Tiffany's #1 fans as she is. But if she's a good partner to you, then every so often she'll join you for your favorite activities that are less than interesting to her. So it's important to reciprocate the behavior. Of course your tastes don't have to completely align with hers and she'll enjoy a conversation about different pop culture preferences. It's just nice to show that you respect her faves enough to acknowledge them once in a while. An added bonus is that while maybe you won't enjoy a documentary about obsessive Tiffany aficionados, you'll also get to watch documentaries like A Band Called Death about an early black punk rock group or Beautiful Darling about Candy Darling, a transgender actress from Andy Warhol's Factory days.

Likewise, if you've had a rough day and want nothing more than to veg out and unwind, you have the perfect companion who will sit with you and watch 30 Rock for the hundredth time or start a new season of Orange is the New Black. Those who watch together, stay together.

8. She'll have the best #ootd pictures.

From tank tops proclaiming you shoulda put a ring on it, to t-shirts quoting Chris Farley's character in Tommy Boy, your lady is always dressed for a night on the town! (Her clothes are cool and ~ironic~ so if you don't appreciate them, then you're the problem, my friend.)