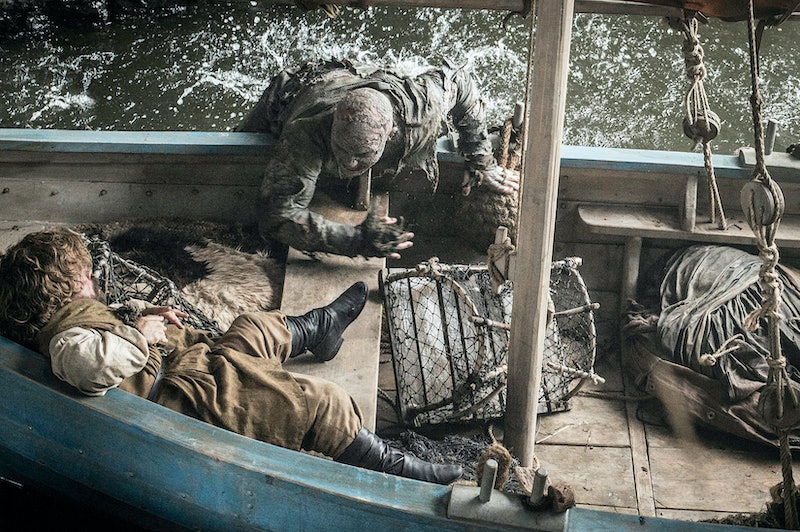 Last Sunday night, fans of HBO fantasy epic finally got to learn why the writers have been sprinkling so many damn hints about greyscale throughout Game Of Thrones Season 5. We've been at least marginally aware of the mysterious disease since Stannis Baratheon's afflicted daughter Shireen was introduced in Season 3. But the constant references to the Westerosi version of leprosy have stuck out like a sore thumb this year... and they were all leading to the scene in the most recent episode, "Kill The Boy," when Tyrion and Jorah were attacked by a horde of Stone Men while sailing through the ruins of Old Valyria. Do these greyscale victims have anything in common with the undead army Jon Snow is facing at the Wall? What's the difference between the White Walkers and the Stone Men?

First of all, it's important to note that the true comparison is not actually between the Stone Men and the White Walkers, but between the Stone Men and the wights , the reanimated corpses created by the White Walkers. It's easy to see the similarities: both a stone man and a wight are mindless, ambling creatures whose only desire seems to be attacking the living. But while wights are truly undead, stone men are simply infected humans. (Think of it like the difference between the true zombies in Dawn Of The Dead and the people infected by the Rage virus in 28 Days Later.)

But what if the similarities between the two creatures go deeper than their zombie-like behavior? What if there's an actual connection between the stone men and the wights? Obviously we know that the wights and their White Walker masters are associated with ice — they live north of the Wall, it always gets colder when they approach, and they can only be killed by dragonglass. While the origins of greyscale are unclear, even in the books, it seems to have something to do with water: The disease thrives in damp places, the stone men live on the banks of a river, and Jon Connington contracts the illness when he dives into the river to save Tyrion. (Of course, this fate instead befalls poor Jorah on Game Of Thrones.)

The more astute among you will likely have noticed that ice and water are in fact very similar substances. Could the wights and the stone men therefore be two sides of the same coin? Perhaps greyscale is simply a milder manifestation of the White Walkers' curse, the potency of which diminishes the farther south you go (and the warmer you get). Their full power can only be felt north of the Wall — which is why they're waiting for winter to come and blanket Westeros in snow before they attack.

There are hints that greyscale isn't quite as scientific as we think. In A Dance With Dragons, as they sail down the river, one of Tyrion's companions (who didn't make the translation to the screen), says that the fog "stinks of sorcery." Another superstitious companion refers to greyscale by a colloquial name, "Gavin's Curse." Jon also learns that the wildlings refer to the disease as "the grey death" and regard it with much more fear than Westerosis do. What if it's not caused by bacteria or a virus at all... but instead has its roots in magic?

Now that Thrones creators David Benioff & D.B. Weiss are departing more and more from George R.R. Martin's source material and are mercilessly cutting superfluous characters and storylines left and right, surely they wouldn't have felt the need to include such a focus on greyscale in Season 5 if it wasn't going to lead anywhere. Of course, maybe the only place it was leading was to a ticking clock on Jorah's mortality — but I prefer to think the disease is going to have an unexpectedly large role to play in the endgame.

If the stone men and the wights are as inextricably linked as I suspect they are, then I have one lingering question: What would happen if a person infected with greyscale encountered a White Walker? So far, there are only two characters that we know of with the disease: Shireen Baratheon and Jorah Mormont. Given that the latter is halfway around the world from the Wall, I would say that Shireen has the better chance of running into a White Walker sometime soon.

You'll remember that the show revealed the White Walkers' penchant for nabbing children and turning them into more White Walkers. What if the Night's King tried this same trick with Stannis' adorable daughter? Would it do the same thing it does to everyone? Would she be unaffected, since she already has a version of the disease flowing through her veins? Or would the Night King's curse and the greyscale combine to form some cocktail of magical powers?

I'm calling it right now: A Song Of Ice And Fire will end with mutant superhero Shireen killing the entire army of White Walkers and wights, singlehandedly rescuing all of Westeros from a horrible fate.

(Unless, of course, Melisandre gets her hands on the princess first.)