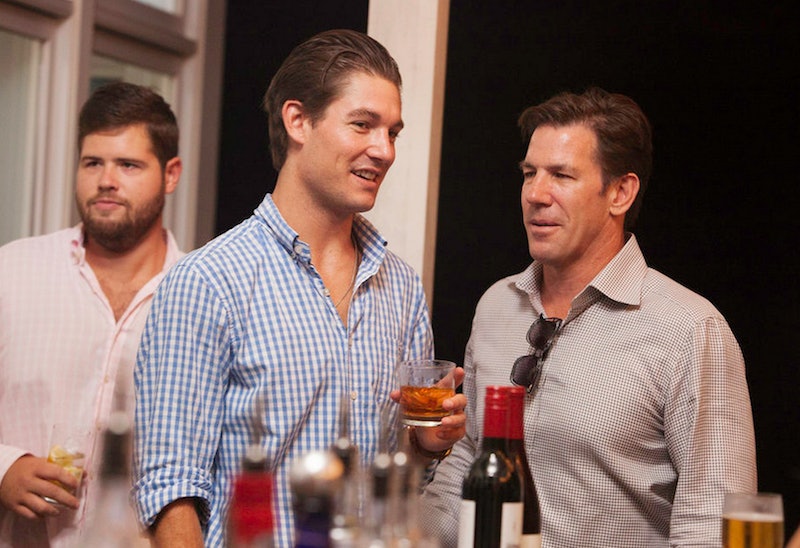 I have a bone to pick with Bravo: How dare Season 2 of Southern Charm be over and done with already! The second installment of the reality series about my favorite Charleston socialites couldn’t have been more than five episodes long, right? This injustice will not sta— [looks at the Southern Charm Wikipedia page]. Oh, pardon me. It was actually 11 episodes long. Three episodes longer than Season 1. I reckon I shouldn’t complain. I reckon I should be grateful. I reckon time flies when you’re getting lost on a beach while off-roading in a golf cart. I rescind the bone pick.

While it certainly was a fun finale, it wasn't exactly a tornado of surprises: T-Rav and Kathryn did not get back together, Shep and Craig puffed out their chests at each other over woman (oof, I had some serious Season 1 Bro Codegate déjà vu), and Patricia threw yet another a flawless party (you can't go wrong with a Renob performance). It was 75 terrific minutes of television... but there weren't any twists, there weren't any turns, and there weren't any curveballs.

Or weren't there? In the final moments of the finale, the episode hit us with something that appeared to pack serious curveball potential:

Uh oh. UH OH. Remember the "9 MONTHS LATER" Season 1 finale moment? Quick refresher: Right before the show introduced the viewers at home to Baby Kensington at the end of last season, this happened:

Could it be? I wondered when I saw the "Two weeks later..." screen at the end of the Seas 2 finale. Might there be another Southern Charm baby?!?!?!?!?!

The show never cut to a baby announcement. Instead, the show cut to...

Where are Craig and his belongings driving off to????

Before we got an answer, I paused my DVR and wrote down some predictions:

PREDICTION 1— He did some serious spring cleaning and was taking all of his purged belongings to Goodwill. PREDICTION 2— He was moving into a tiny house and will appear on an episode of HGTV's Tiny House Hunters . (Before I watched the SC finale, I caught back-to-back episodes of Tiny House Hunters, so 100-square-foot houses are on the forefront of my mind right now.) PREDICTION 3, PART 1— He was moving into a more affordable place. Possibly with a roommate. PREDICTION 3, PART 2– Oh, my gosh. What if HE WAS MOVING IN WITH KATHRYN? The show's been hinting at the two of them getting together all season. WHAT IF THIS IS IT?!?!?!?!!

WHAT REALLY HAPPENED: Craig called his mom and said he and his belongings had hit the road. He admitted he and Charleston didn't mesh too well (e.g., the party hearty issue that culminated in him getting fired from his job), so he was heading back to Delaware. He would study for the bar exam there.

Well, I'll be! I didn't see THAT coming. What a twist! You really got me this time, Craigster.

If Craig really does stay in Delaware until he takes the bar, what might this change mean for the show? Well, if Season 3 does happen (IT BETTER!!!!), Craig has to be a part of it in one way or another. (I'm too attached to everyone in this cast, not ready to say goodbye to anyone, et cetera, et cetera) I wouldn't be mad if Shep visited Craig in his Delaware study den for an episode or two. Craig could show the viewers at home all of his color-coded index cards! (I've never studied for the bar, but I assume lots of color-coded index cards are involved.) It'd be great TV, no doubt about it.

...Speaking of great TV, I will never stop dreaming about a Southern Charm/Tiny House Hunters crossover. I planted the seed in my own mind, and I'm not about to stop watering said seed.

A gal can dream, right?