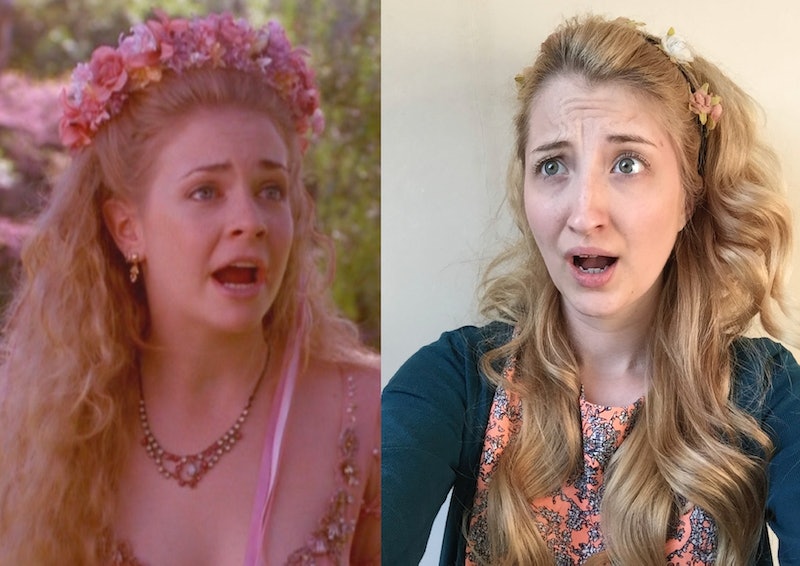 When I was younger, I used to wish that I could be Sabrina Spellman. She had the most awesome magical powers, a talking cat, and her iconic Sabrina the Teenage Witch hair, which was legendary. Everyone was rocking little butterfly clips and up/down 'dos in the '90s after seeing Sabrina flaunt these fabulous styles on our screens.

Like most girls my age, I was also an avid collector of Sabrina's Secrets Magazine, which came with a free gift of something hair and beauty related that you placed perfectly into the glittery, purple box that also came with the magazine. It had possibly the best free gifts ever for teen girls — or aspiring teen witches — some of which included: Colored hair mascara, spiral clips with gems, and ombré flower hair clips. One of my favorite parts of the magazine was the quiz page, as it had a different quiz in each issue ranging from themes along the lines of, "What's your perfect pet?" to, "What's your boyfriend type?" I wish I had kept some issues to look back and have a little giggle at.

Sabrina's unforgettable '90s style will forever be emblazoned on my mind and so to honor this unlikely heroine I created some Sabrina hairstyles at home to see how they would hold up in 2015.

This is my everyday hair; it's blonde and long and seems to be getting longer by the day! Not that I'm complaining; it's just that in the hot, summer months it's getting a bit hard to handle. With my hair being similar in color to Sabrina's I thought the looks could appear quite similar, although her hair was much shorter than mine in the earlier '90s seasons, of which I have taken most of my hair inspiration from.

1. The Super Side Part

I think this was a classic Sabrina look, as it comprises the sleek, "not a hair out of place" feel of the '90s when hair straighteners seemingly sky rocketed in popularity. This was incredibly easy to create, I just used my hair brush to move my parting and flop more hair over to one side. Piece of cake!

Verdict: I actually quite like this look. I feel it is rather elegant and reminds me of Cher Horowitz. However, I think the only negative about it is it possibly looks a little too '90s. I'm on the fence with this one.

This hairstyle absolutely screams 1990s. It was a look worn by many girls and women of the '90s from Rachel of Friends to Lizzie McGuire. It could be argued that this style was the defining 'do of the decade.

For my crazy mane, this was a little trickier to wear than I imagine it would be for someone with short or mid-length locks. I also don't have bangs so I couldn't quite get it spot on. However, I worked with what I had and left a couple of strands down at the front, I scooped a couple of sections of hair from behind the strands backwards, and then secured them with a hair tie.

Verdict: Although a little reminiscent of Brigitte Bardot and her effortlessly feminine bouffant, I felt like this style was neither here nor there. It's a style for those who can't quite decide if they want their hair up or down and I think it comes across a little... meh.

3. The Butterfly Clip 'Do

This is probably the most memorable style Ms. Spellman ever wore in the series, most likely due to the fact that butterfly clips were huge in the '90s and Sabrina embraced the trend wholeheartedly. You know I'm not sure which came first; the butterfly clip trend or Sabrina? We could have a bit of a chicken and egg scenario going on — was Melissa Joan Hart instructed to wear these clips because they were fashionable or did she popularize them by wearing them on the show? I guess it will just have to be one of life's mysteries!

Unfortunately, I am sad to say I no longer own any butterfly clips — tragic, right? — so I used some clip on earrings to pin my hair back instead. I made sure to tuck the rest of the hair around my face behind my ears like Sabrina and pulled some hair from the back to the front to cover my ears.

Verdict: I think this style is OK but it makes me feel 13 again. And I really don't want to be 13 again! Unless I knew what I know now. Youth really is wasted on the young, huh?

Who remembers Roland the troll who demanded Sabrina's hand in marriage because he helped find her missing homework? How medieval! I really like this style on Sabrina; it's got major Drew Barrymore in Ever After vibes going on and coupled with the pink frock, hat, and flowers it's very romantic.

I used my trusty heated rollers to get my hair to curl as I don't think there would be enough hours in the day for me to curl it by hand. After this, I created a half ponytail with the top layer of my hair. I split the ponytail in two and bobby pinned half to the right of my head and half to the left, in an effort to create a more voluminous look. I finished with my flowery headband, which I admit, hasn't quite got the same "wow" factor as Sabrina's epic flower garland.

Verdict: I like this style as it is feminine and quite summery with the floral accessory. But I couldn't quite get the same amount of volume as Sabrina has with her luscious locks (is she wearing a wig?) and I think the hugeness of her hair is the key to making this style work.

Oh, the episode where Britney Spears magically appears and gives Sabrina life advice while they both work on their dance moves is totally hilar! So of course I had to try a hairstyle from this iconic episode. I wasn't quite sure how to add the texture needed to copy Sabrina's style so I left my hair curly as I thought this would give it a good texture. I put my hair in a classic low ponytail, grabbed a strand, and wrapped it around my hair tie securing it from underneath with a bobby pin. Ta da! Simple yet chic.

Verdict: I really like this style from the back as I think it looks quite sophisticated. However, from the front there's not an awful lot going on.

Have a charming time as you channel one of the most legendary teen witches in history!