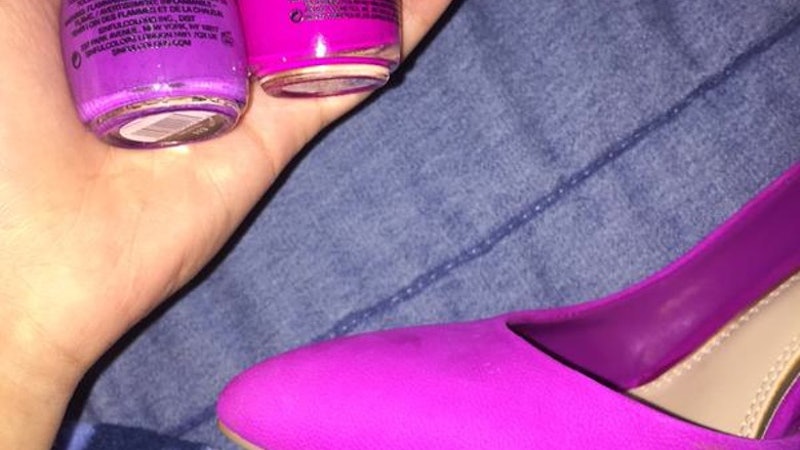 You might have noticed there's a new optical illusion making the rounds on the Internet. People are asking which shade of nail polish matches this shoe, and it seems that no one can agree. The whole thing is fairly reminiscent of the The Dress, aka The Thing That Nearly Destroyed the Internet And Shall Be Set Down In The Great Online History Books. But even though I certainly see why the shoe debate would remind people of The Dress, really, the two aren't that much alike. There — I said it: The Shoe Debate is nothing like The Dress Debate. Just deal with that for a moment.

If you somehow lost all Internet access for a week earlier this year and therefore missed this whole episode, The Dress was an optical illusion that truly baffled the world. It was a poorly lit picture of a striped dress, which some people perceived as white and gold, and others as blue and black. I was dead sure it was white and gold, myself, until the manufacturer finally stepped forward and revealed it to be blue and black, thereby making my head spin around.

The new optical illusion on the block is a picture of a high heeled shoe on a blue background and two nail polishes, and once again, people are divided on which polish matches the shoe. I personally don't think either is a dead match, but if I had to pick, I would definitely pick the one on the left (which I at least perceive as a sort of bright purple color) rather than the one on the right (which I see as a sort of purple-ish hot pink). But just like The Dress, I apparently am out of sync with people, since a Buzzfeed quiz suggests that most people see the opposite.

But the similarities mostly end there. Because even though they are both weird, fashion-related optical illusions, there are at least six reasons why The Shoe is nothing like The Dress.

1. The Dress Was Way More Contentious

When The Dress first popped up online, people not only freaked out, they freaked out. My entire Twitter feed was nothing but people name calling and making fun of each other for seeing different colors. And while everyone is certainly taking note of #TheShoe, people aren't nearly so intense or invested in proving themselves "right" this time around.

2. The Dress Was Preceeded By Llamas

Just hours before The Dress blew up, the Internet was captivated by a live stream of police in Arizona trying to capture a pair of escaped llamas running through town. The two managed to run free for just long enough to win the eternal love of the online world as we all cheered them on and mourned their inevitable capture. I'm not sure if the llamas were therefore heralding in The Dress or if The Dress was some sort of Tower of Babel thing to tear us apart after we'd all just come together, but the point was The Dress was only part of a wild day on the web. The Shoe? The Shoe does not have llamas. And that matters.

3. The Dress Was Demon Magic and Witchcraft

I still see white and gold. I refuse to believe it is anything else. I honestly find it more plausible that you people are all collectively lying to me or that there is some sinister supernatural nonsense going on. The Shoe, however, is mostly just a shoe.

4. The Shoe Is a Matching Exercise

Unlike The Dress where people spontaneously saw different colors (including some people who saw really weird ones — my sister thought it was blue and gold), The Shoe Debate revolves around matching the shoe to one of two specific colors. It's still clearly some sort of weird optical illusion stuff, but it isn't the same as just spontaneously seeing gold instead of black or white instead of blue. Which brings me too...

5. The Shoe Is Clearly Between Both Shades

Is the optical illusion affecting the way we see the polish? The shoe? Both? Whatever the truth, the magic of computer science has determined that actually, the shoe matches neither polish; rather, it seems to be somewhere between the two. Which means no one is really right or wrong, unlike The Dress.

6. The Dress Nearly Destroyed the Internet

The Dress was a phenomenon that came out of nowhere and tore us apart. It divided friends and families and tested the very fabric of all we know and hold dear, calling into question the nature of reality itself. And then it became a meme, because that's how we process trauma in the Internet age. But with The Shoe Debate, most people aren't really even talking about the shoe at all. Mostly, we're all just fixated on how it reminds us of The Dress debacle. Because that really was iconic. This is just not as big.