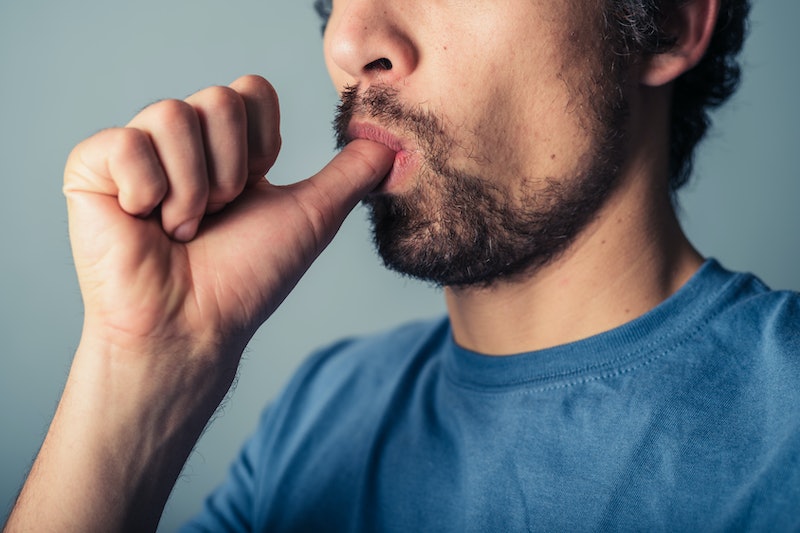 The man-child: a growing breed of male specimen with an acute form of Peter Pan syndrome that is just flat-out sad. Yes, the adult world is a daunting place filled with 401ks, taxes, and a stifling, and somewhat ironic lack of freedom, but that does not mean we can prevent ourselves from growing up. Unfortunately, there are plenty of guys out there who are willing to try, and they can pose serious drawbacks to us grown-ass women embracing our new-found adulthood by moving forward. For those of us who prefer men, we've most likely dated a man-child at one point in time.

The way they preserved their youth and lived a life free of responsibility and obligation may have seemed appealing at first, until you realized you could not carry out an adult conversation with them. Before you know it, you're spending each Saturday in the windowless den of their “man-caves”, watching as they play Call of Duty and eat a weeks-old bag of hot Cheetos. And no, the silly, fifth grade terms he uses to call your lady parts is no longer cute, and is actually becoming increasingly creepy. So what exactly does this backwards breed of man who remains perpetually 15 years-old look like, and how can you stay away once you've come across him?

Here's a few token things to look out for if you think you may be dating a man-child.

1. He Still Lives With His Parents

Like I said, the real world is hard. Finding a job straight out of college may seem as easy as finding a unicorn-riding leprechaun at the end of the rainbow, so many of us post-grads have little choice but to move back in with our folks once our illustrious college days have come to an end. But if this guy you're shacking up with has been living with his parents for years and is making no movement to leave because mom still makes his bed, then you've got a problem.

2. He Plays Video Games All The Time

The classic sign of the man-child: he's glued to his console, and is only exposed to the glow of artificial light. While plenty of men, and women enjoy playing video games, a guy who can't unplug for a second is far beyond addicted; he may be trying to escape from something, like...oh, let's say...adult responsibilities? What's more, when you're with a man-child who spends all of his days on his PS4, chances are he's not taking you out or paying you any attention, for that matter. And do you really want to spend your life in a stale room that smells like sweat and abandoned dreams?

3. A Balanced Dinner To Him Is Leftover Taco Bell And Fruit Loops

Man-children often do not know what makes for a healthy, balanced meal. Often, they are found to be eating food teetering on expiration, or things that have colors you cannot find in nature. Whether it's a 2 liter bottle of Mountain Dew that sits beside his bed in case he gets thirsty at night, or that box of pizza he just threw in the fridge who knows when, he tends to stay away from fruit and vegetables. Chances are he doesn't use utensils either, and most of the things he eats off of do not fully count as dishware. If he even cleans his plastic spork, and Styrofoam bowls is another question entirely.

4. He Doesn't Take Responsibility For Anything

This is a big one and pretty self-explanatory. Man-children do not have the word responsibility in their vocabulary, so chances are when they are met with the foreign term, they deny its existence entirely. Whether you are asking them to rightfully take the blame for something they have done wrong, or telling them that, yes, their landlord will notice if they decide not to pay rent this month, this guy just isn't willing in any capacity to confront all the things that come with getting older.

5. He Doesn't Have A Job, And Shows No Hope Of Getting One

If he's between jobs, and actively on the hunt for something suitable, that's one thing. But if he's too busy with beating the latest version of Grand Theft Auto, that's another story entirely. Man-children tend to not care about making something of themselves; they lack the necessary motivation that comes with wanting to carve out a solid career path. This is probably one of the worst characteristics on the list, because this lack of motivation most likely means this guy won't make for a suitable, long-term partner. Being the breadwinner in your relationship is awesome (you go girl!), but having to cater to a man who doesn't want to get off of the couch is not OK. Ever.

6. It's Not That He Doesn't Want To Clean, He Just Doesn't Know How

The man-child is aware that his space is filthy but, he doesn't really care to change it. He's OK living in the dirt, and funky smell as long as he can find a clean shirt for the next day. And chances are, if you finally force him to clean, he probably won't know how to work a vacuum, or use a dishwasher. You will be peppered with questions like whether or not you can use body wash on your dishes, or if you can do your laundry in the tub. This is most likely because the guy has never really cleaned a day in his life, and is pretty content going on that way.

7. Your 15-Year-Old Brother Handles Conflict Better Than He Does

Not to make generalizations, but the men out there I've experienced are pretty crappy when it comes down to conflict within relationships. A man-child, though, is even worse. Unlikely to want to confront his emotions because he has not come to terms with them in a grown-up, healthy way, he'll avoid the problem entirely. Or, if you did something to bother him, he might be passive-aggressive or whiny about it. Basically, he will either run away from the problem (classic avoiding responsibility again) or act like a small child throwing a temper tantrum and suddenly it's clear where the name came from.

8. His Sense Of Humor Was Funny...In Middle School

Sex jokes and bathroom jokes can be funny, but there is a time and place for them. If the guy you're seeing is only well-versed in toilet humor, and makes the type of jokes that are actually offensive to women, then he has a lot of growing up to do. This sense of humor could come from a place of insecurity, or this guy could legitimately think these are the only things on the planet that are truly funny. Either way, gross.

The man-child seems to be popping up everywhere nowadays; the more difficult it is to get a job, and the deeper in debt we crawl after college, the more men are choosing to revert back to their pre-pubescent ways and avoid all of the scary things the adult world has to offer. But, if we ladies are accepting the challenge, in all of our fierce, badassness, there is no reason to deal with a guy who wants to stay a kid. There will be a grown-ass man within this world to go with our grown-ass womanness, and guess what? He has a retirement plan.