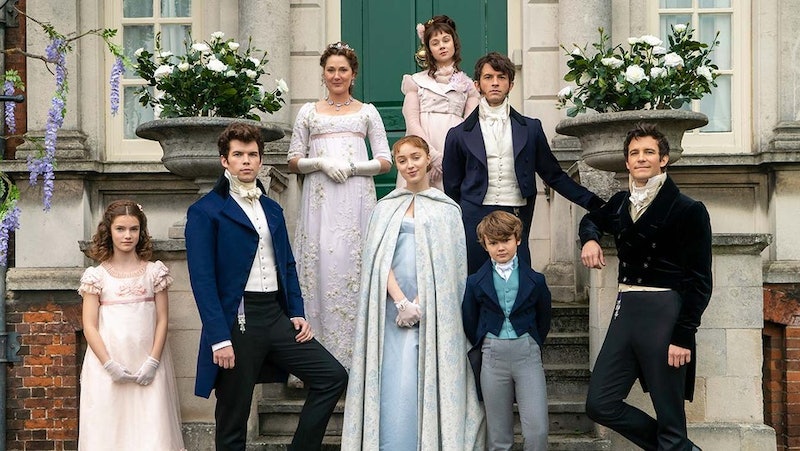 When Shondaland’s Bridgerton debuted on Netflix in 2020, it took the world by storm, quickly becoming Netflix’s most-watched show of all time. Now, the series is back for a second season on March 25, and it’s poised to once again dominate the ratings, winning viewers over with its intoxicating blend of fanciful aesthetics and soap opera-worthy drama. Based on Julia Quinn’s bestselling novel The Viscount Who Loved Me, this season’s romance follows eldest son Anthony Bridgerton as he squares off against his fiancée’s abhorrent sister, who hates Anthony almost as much as he hates her. If you, like millions of other fans, just can't get enough of Netflix's new series, these books like Bridgerton will help fill the entertainment void that follows your marathon-watching session.

Bridgerton may be set in the 1800s, but fans aren't flocking to the series for historical fiction alone. Daphne and Simon’s manufactured attachment in Season 1 looked a lot like the fake-dating trope popular in contemporary romance, and Anthony’s enemies-to-lovers attachment in Season 2 will be all-too-familiar to fans of the genre. Plus, one of Bridgerton’s biggest selling points — the cast's ethnic diversity — is also common in the show’s literary counterparts, as there are plenty of historical romance novels focusing on characters of color.

That’s all to say, if you’re a fan of Bridgerton, you’re almost guaranteed to love romance novels. And whatever your reason for loving the show — a certain trope, the period setting, or any number of other elements — you'll find something on the list below that will satisfy your craving for more. Below, 19 books like Bridgerton to read, because you can only re-watch the series so many times.

More like this
'The Sandman’s Ending Is A Departure From Neil Gaiman’s Comic Book Series
By Kadin Burnett
What's New On Netflix: A Third '365 Days' Movie & Lili Reinhart’s New Film
By Arya Roshanian
What’s New On Netflix: 'Never Have I Ever' & 'Indian Matchmaking' Return
By Arya Roshanian
Bridgerton’s Simone Ashley Stars In ODESZA's "Love Letter” Music Video
By Radhika Menon
Get Even More From Bustle — Sign Up For The Newsletter

This article was originally published on Dec. 29, 2020