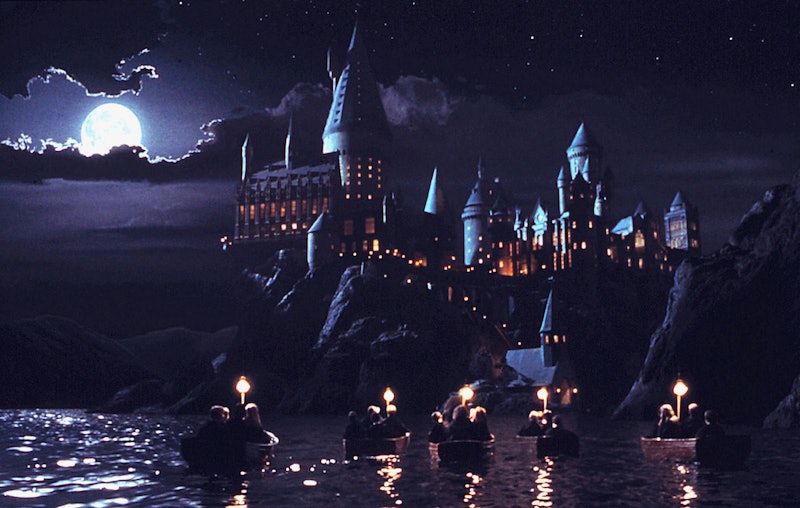 If you didn’t dream of going to Hogwarts as a student and questioning which house you’d be sorted into, then you’re not a true Harry Potter fan. For those that are, there are ways to go to Hogwarts in real life. Though you may never be able to visit the magical fictional locations from Harry Potter, you can visit some of the real-life destinations that were used in all eight of the famous movies.

All muggles can start their Harry Potter journey at the Wizarding World of Harry Potter at Universal Studios parks in both Orlando and Los Angeles. The mini Harry Potter parks are any fans’ dream, featuring recreations of many Hogwarts and Diagon Alley staples, including Gringotts Bank, Ollivanders Wand Shop, and the Weasley brothers’ toy store.

READ NEXT: Which ‘Harry Potter’ Star Is the Richest?

Superfans can also travel to various locations in the U.K. used for the films, like the sites that were used as Hogwarts, the street that fans know as Diagon Alley, and the rock formation where Harry and Hermione camped if you’re that dedicated. Perhaps most excitingly, fans can even ride the Hogwarts Express and get that dreamy hillside view of the Glenfinnan Viaduct in Scotland.

You may not be able to take Snape’s classes or sleep in the Gryffindor dorm rooms, but you can get close by visiting these essential Harry Potter landmarks.

The magical train station that indicated your arrival at Hogwarts is actually the Goathland railway station in North Yorkshire, England. The station is free to visit. But if you want to get the full Hogwarts entrance experience and arrive by train, you’ll have to pay for a ticket.

The magical Hogwarts Express is an actual train you can ride. It won’t take you to the real Hogwarts, but you can still witness the same picturesque views that Harry, Ron, and Hermione saw on their way to school every year, specifically that stunning hillside viaduct. It costs a few pounds to travel on that route from Whitby to Goathland, the station used as the Hogwarts arrival site. Apparently, there’s not much else to do or see, but it’ll be worth it for that view alone.

In the final Harry Potter movie, Deathly Hallows Part 2, Harry and Hermione camp at Malham Cove in North Yorkshire, England, as they keep hunting for Horcruxes. The film makes it look like the middle of nowhere, and it’s just as difficult to get there. The site is free to visit, but you either need to get there by car or take a bus service from the nearby town of Skipton.

Our beloved Dumbledore was laid to rest at Eilean na Moine, located in the lake of Loch Elit in between the villages of Glenfinnan and Lochailort, Scotland. It’s easy to get a picture with a great view, as long as you can drive there, but getting to Dumbledore’s gravesite may be tricky considering Eilean na Moine is a tiny island in the middle of the lake.

The infamous Hogwarts bank is the Australia House in London, described on their website as “the longest continuously occupied foreign mission” in the city. Fans can easily reach the building and take pictures outside for free, but the interior is what the films mostly used, and since it’s a place of diplomacy, you likely won’t get access inside without a legit reason to enter. And no, withdrawing golden Galleons is not a valid reason.

Diagon Alley might be the easiest Harry Potter location to access. London’s Leadenhall Market was used as the wizards’ gathering center in the very first movie, and it’s accessible by public transit. The only money required is however much you decide to spend on souvenirs — but if you’re dead set on leaving with a truckload of Harry Potter merch, it might be more worth it to head to King’s Cross Station, as Leadenhall is full of luxury merchants.

If you want to get to Hogsmeade, you first have to leave from London’s King’s Cross Station — or more specifically, Platform 9 3/4. While there’s no wall that you can run through at this train station, King’s Cross does have a Platform 9 3/4 sign in between platforms 9 and 10 that you can pose in front of, plus the station is home to one of London’s Harry Potter gift shops.

The exterior used for Hogwarts in the first two movies is a church, which makes sense given Hogwarts looks just as grandiose and extravagant as old cathedrals. “Hogwarts” is Durham Cathedral, located in the town of Durham in North England. Entrance is obviously free, and the church will even let you pose in the outdoor walkways, the church’s courtyard, and if you’re lucky, Miss McGonagall’s classroom. But this is still a place of worship, so please don’t go searching for Dumbledore’s office or the Dark Arts lair.

More like this
Nicola Coughlan Shared A Lady Whistledown Excerpt From ‘Bridgerton’ Season 3
By Grace Wehniainen, Alyssa Lapid and Sam Ramsden
'The Lord of the Rings: The Rings of Power' Revisits Iconic Spots From 'The Hobbit'
By Darshita Goyal
Margot Robbie Breaks Her Silence On *That* Viral 'Barbie' Moment
By Maxine Harrison
A New 'And Just Like That' Table Read Pic Confirms A Key Character's Return
By Jack Irvin and Grace Wehniainen
Get Even More From Bustle — Sign Up For The Newsletter

This article was originally published on April 27, 2016