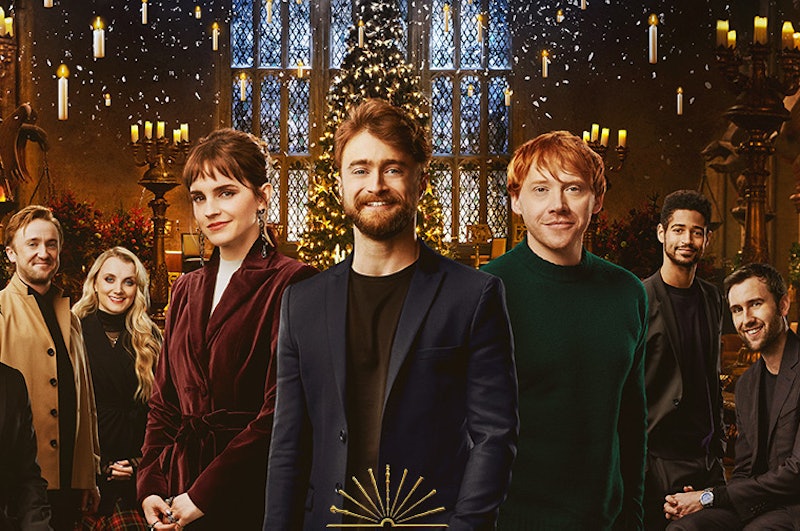 It’s hard for muggles to believe, but the Harry Potter film franchise is commemorating its 20th anniversary this year. The wizards-to-be first appeared on the big screen two decades ago when Harry Potter and the Sorcerer’s Stone premiered in 2001 to enormous box office success. To celebrate, Daniel Radcliffe, Emma Watson, Rupert Grint, and many fan-favorite cast members have reunited for a Return to Hogwarts reunion special, which debuts Jan. 1 on HBO Max.

Return to Hogwarts is sure to be a huge hit, knowing that almost anything the name Harry Potter touches magically becomes a massive moneymaker. From eight films to books to theme park rides to Broadway plays that have impacted the lives of countless fans, the wizarding world of the Boy Who Lived is worth a reported $25 billion, accounting for all forms of media.

With money coming in from all areas of the world and touching every part of pop culture, is it any wonder that those connected closely to the film franchise have also made quite a bit of money as well? Author J.K. Rowling, who is not in the reunion special, is worth at least $1 billion, and many of the actors who brought her words to life now claim a net worth in the millions.

What Is Daniel Radcliffe’s Net Worth?

The richest member of the Harry Potter cast is the actor who played Harry, but the amount of money Daniel Radcliffe earned from the series is stupefying. Altogether, the man who portrayed the scarred wizard-in-training is now worth $110 million, according to Celebrity Net Worth.

Radcliffe’s earnings increased significantly throughout the series, and once it became clear the films were all going to be massive box office successes, he and his two closest co-stars were able to negotiate for a higher payday every time they stepped in front of the camera. For the first movie, he was paid $1 million, but that ballooned to $25 million for the two-part Deathly Hallows films.

Despite his massive fortune, Radcliffe claims he has spent very little of his net worth. He told The Belfast Telegraph that he doesn’t “really do anything with my money,” though he is “very grateful for it because having money means you don’t have to worry about it, which is a very lovely freedom to have. It also gives me immense freedom, career-wise.”

What Is Emma Watson’s Net Worth?

Emma Watson has enjoyed perhaps the most lucrative and public-facing career of the bunch after the Harry Potter film franchise. During the eight-part movie series, she banked a total of $60 million for portraying Hermione Granger, according to The Hollywood Reporter. She has had no issue finding work, and her bank account has continued to expand.

Watson earned $14 million in 2017, enough for Forbes to rank her as the sixth-highest paid actress in the world. Most of that sum came from her role in the live-action Beauty and the Beast remake, which added another billion-dollar film to her filmography. She has also appeared in high-profile projects like Noah, The Bling Ring, The Perks of Being a Wallflower, and Little Women.

Rumors circulated early in 2021 that Watson was planning on retiring, but she clarified that while she may be interested in working behind the scenes, she isn’t going anywhere.

What Is Rupert Grint’s Net Worth?

Rupert Grint, who portrayed Harry’s redheaded best friend Ron Weasley, is reportedly worth $50 million. While filming the Harry Potter movies, Grint began accepting other projects, and he has worked continuously since then, though he hasn’t appeared in any blockbusters or major award contenders, instead selecting the titles he finds most interesting.

Grint currently stars on Apple TV+’s Servant, which was created by M. Night Shyamalan. Ahead of the release of Season 2, which dropped in early 2021, the series was renewed for a third season.

What Is Ralph Fiennes’ Net Worth?

Ralph Nathaniel Twisleton-Wykeham-Fiennes is one of the most respected actors in the film industry, and he brought his unparalleled talent and ability to portray someone truly evil to the character of Voldemort. His was a case of perfect casting. Due to his decades of working as an acclaimed actor, Fiennes has accrued a net worth of $50 million, according to Celebrity Net Worth. He has appeared in Quiz Show, Red Dragon, Maid in Manhattan, The Constant Gardener, The Hurt Locker, and the most recent titles in the James Bond franchise as the new “M.” He has been nominated for two Academy Awards for his stellar performances in both Schindler’s List and The English Patient. He has also won a Tony in 1995 for playing Prince Hamlet in Hamlet.

What Is Tom Felton’s Net Worth?

Speaking of villains, Tom Felton’s portrayal of the annoyingly smug Draco Malfoy provided the perfect foil for Radcliffe’s Potter, and his bleached blond hair is a signature look from the series. The star-turning role made him a household name in the United Kingdom and a favorite among Harry Potter fans everywhere. Like many of his co-stars, it’s difficult not to see his face whenever his character’s name is mentioned. Felton has continued to work steadily after his Harry Potter stint, but almost exclusively in the UK in films and television. He regularly receives positive feedback from critics and audiences, and he now has an estimated net worth of $20 million.

What Is Maggie Smith’s Net Worth?

The Harry Potter movies may have introduced Maggie Smith to a new, younger audience, but she was already regarded as one of the finest actresses of the past 50 years before she signed on. The British talent portrayed Professor Minerva McGonagall in all of the films, helping her net worth rise to an estimated $20 million today. Smith has starred in films such as Gosford Park, The First Wives Club, A Room with a View, Othello, and Sister Act (and its perfect sequel, Sister Act 2: Back in the Habit). She has also appeared in dozens of TV shows, mostly in the UK, but she scored a huge win around the world with Downton Abbey. Smith is also the most decorated star in the Harry Potter franchise when looking at awards, as she has won what’s called the triple crown of acting, meaning she’s collected at least one Oscar (2), Emmy (4), and Tony (1).

What Is Michael Gambon’s Net Worth?

Like Maggie Smith, Michael Gambon is regarded as a national acting treasure in the UK. The man who portrayed Professor Albus Dumbledore spent decades primarily working on stage there, and he has appeared in dozens of plays throughout his lifetime. He has earned an incredible 13 Olivier Award nominations, which is essentially the British equivalent of a Tony Award. Gambon has primarily starred in TV and film for the last decade or two, as his memory loss has reportedly kept him from the stage. He has appeared in popular releases like Judy, The King’s Speech, Paddington (and its sequel), The Good Shepherd, and Gosford Park alongside Smith.

What Is Jason Isaacs’ Net Worth?

Jason Isaacs, who auditioned for a different Harry Potter role before hesitantly accepting the part of Lucius Malfoy, pulled off playing Draco’s evil father brilliantly. Throughout the Harry Potter series, he’s the man everyone loves to hate. He originally didn’t want to play a villain, opting to audition to be the at least initially lovable Hogwarts professor Gilderoy Lockhart. Isaacs has a net worth of $12 million, according to Celebrity Net Worth.

What Is Matthew Lewis’ Net Worth?

Unlike some of his Harry Potter co-stars, Matthew Lewis didn’t get his start in the franchise. The English actor began appearing in TV shows in his home country when he was just 5, and he continued to find work in that medium even as he played Neville Longbottom. Since Harry Potter concluded, he has continued to remain a fixture of well-received programs like Ripper Street and All Creatures Great and Small as well as a number of primarily indie films like Me Before You.

What Is Bonnie Wright’s Net Worth?

Bonnie Wright stands out from the talented cast of Harry Potter based on what she’s chosen to do with her career. While the Ginny Weasley star has appeared in at least half a dozen films in the past decade, she has currently focused her creative energy toward working behind the scenes in the entertainment industry. She has directed a feature full-length, several short films, and some music videos, and she has also written one movie, helping bring her net worth to $4 million.

What Is Robbie Coltrane’s Net Worth?

Robbie Coltrane, the man who played Hagrid throughout the Harry Potter franchise, is an OBE in Britain, or an Order of the British Empire, which he earned for his services to drama. He has been working his magic in starring and supporting roles on TV and in movies for decades, and he began working steadily in the UK as early as 1980. Since then, he has appeared in dozens of shows and films and has enjoyed a respectable career, one which has earned him a net worth of $4 million.