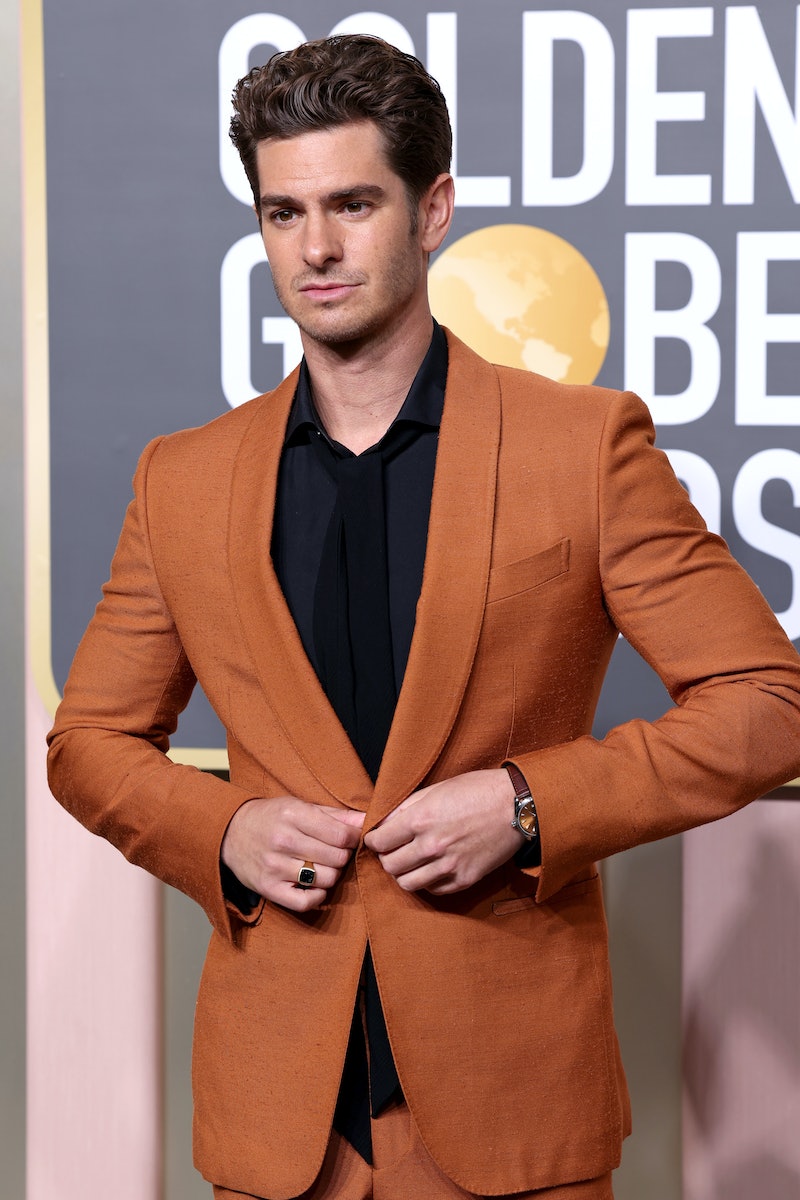 Andrew Garfield, the internet’s boyfriend, is no stranger to leaving everyone swooning — from his impeccable style to award-winning projects. But it was a recent flirty interview with a reporter that has fans blushing over the Spider-Man star. On the Golden Globes red carpet on Jan. 10, Garfield had a run-in (his second!) with journalist and comedian Amelia Dimoldenberg and Twitter quickly noticed fireworks between the two.

“We must stop meeting like this,” Dimoldenberg told Garfield when he made his way to her. Known for her YouTube series Chicken Shop Date, Dimoldenberg asks celebrities for a sit-down interview, aka “date,” over some fried chicken, and is therefore used to asking (mostly awkward) questions for the camera.

“I was gonna invite you to my birthday party,” she told Garfield, who inquired about the date of her party and her astrological sign (they both have Aquarius in their birth charts). He flirtily said, “If you have a sun sign that’s the same as the moon sign of someone else... it’s good.”

“I don't think we should explore this,” he later teased, “I’m scared of what it could turn into.” The interview ended with the journalist asking for an autograph from Garfield for their “Best Friend Certificate.”

Dimoldenberg posted the video on Twitter with the caption, “Round 2” — and fans were delighted. “Is this…the best rom com of the year?” one user asked. Someone else said, “This going WAY too smoothly to not let it be a date.” She also later posted their signed best friend certificate.

Their flirty exchange comes after the heels of their first red carpet meeting in November 2022 at the GQ Men of the Year 2022 event. When she met GQ’s November cover star, Dimoldenberg immediately tried to shoot her shot. “I’ve been trying to get a date with you for a while,” she told the actor about guesting on her YouTube series, “I’m asking you out right now.”

“You do date a lot of people,” Garfield replied, referring to Dimoldenberg’s many YouTube dates with the likes of Ed Sheeran, Phoebe Bridgers, and Louis Theroux, which went viral on TikTok.

The wholesome interview has Twitter smitten. One user wrote, “ENOUGH!!! I have seen the Amelia and Andrew Garfield videos so much times and every time I’ve been giggling.”

Though many found the moment filled with potential, Garfield is reportedly already off the market and is rumored to be dating Bridgerton’s Phoebe Dynevor.

More like this
Twitter Is In Awe Of Taylor Swift’s “Lavender Haze” Music Video
By Jake Viswanath
Beyoncé Has Officially Won The Most Grammys Ever & Twitter Is Losing It
By Jake Viswanath
Twitter Thinks Ben Affleck Needs A Dunkin' Coffee At The 2023 Grammys
By Alyssa Lapid
The Beyhive Is Mad At Harry Styles After Beyoncé’s Album Of The Year Snub
By Jake Viswanath
Get Even More From Bustle — Sign Up For The Newsletter
From hair trends to relationship advice, our daily newsletter has everything you need to sound like a person who’s on TikTok, even if you aren’t.