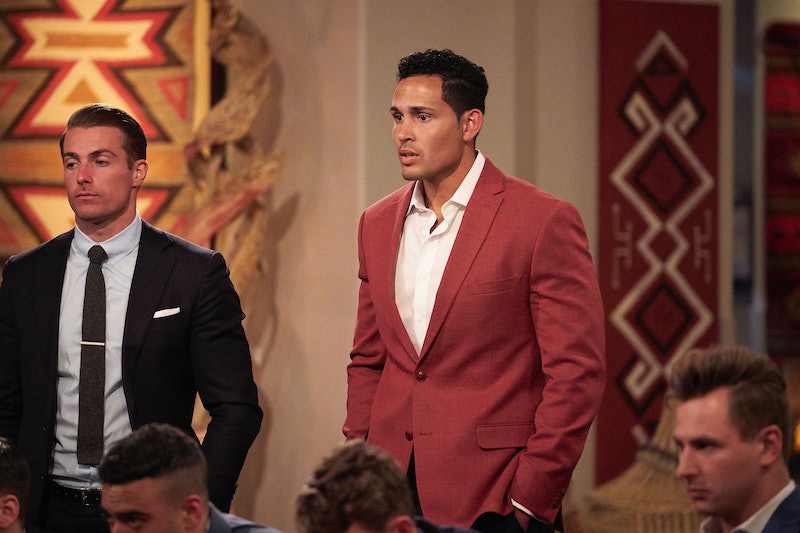 The third episode of Bachelor In Paradise Season 7 kicked off with a big arrival — a 6’6” one, as Thomas Jacobs was keen to let everyone know. You’ll remember him as the much-maligned contestant from Katie’ Thurston’s Bachelorette season who was dramatically sent home after being accused of the worst crime in Bachelor Nation: not being there for the right reasons.

After admitting he’d signed up for the show with aspirations of becoming the next Bachelor, the rest of Katie’s men turned against Thomas and united to tell Katie he had questionable intentions, ultimately resulting in her eliminating Thomas by telling him his “Bachelor audition” was over. Katie’s men’s anger toward Thomas was still raw when he showed up on the beach, though none of the men were more upset by his arrival than Aaron Clancy. He and Tre Cooper, another alum from Katie’s season, immediately got to work, informing anyone who would listen that Thomas was bad news.

The women, on the other hand, were a bit more excited to see him. By the time BiP began filming in the first week of June, Katie’s season had not yet aired, meaning they didn’t know any of Thomas’ history on the show.

The rest of the men did explain why Thomas was trouble, leaving it up to him to share his side of the story. Unfortunately, it didn’t go so well: after Thomas selected Serena P. for a one-on-one date, he filled her in on the drama. She decided it was too “overwhelming” and said they should pursue other people, returning to the beach and solidifying her connection with Grocery Store Joe.

Still, it seems like Thomas will be sticking around for a while — or at least until Becca Kufrin shows up. Until then, only time will tell how much chaos he’ll find himself at the center of.