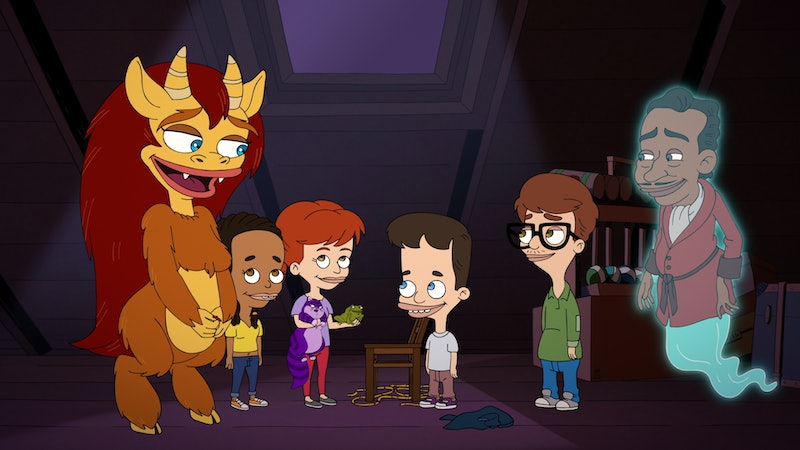 Big Mouth is introducing even more monsters to torment Nick and the rest of the teens. Season 5, premiering on Nov. 5, will feature lovebugs who have the potential to morph into hateworms that turn the kids’ jealousy, hurt, and anger into a dangerous rage. The season also works to set the stage for Big Mouth’s upcoming spinoff series Human Resources, which will delve inside the workplace of the Hormone Monsters, Shame Wizard, and the like.

Before we can get there, though, you may need a bit of a refresher about what happened in Season 4, which premiered almost a year ago in December 2020. Here’s what to remember.

Big Mouth Season 5 picked up right where the previous season left off — with Nick, Andrew, and Jessi heading off to Camp Mohegan Sun for the summer after finishing 7th grade. Nick and Andrew are still fighting, and the tension between them escalates when Andrew befriends Nick’s longtime camp friend Seth Goldberg (voiced by Seth Rogen). Meanwhile, Jessi learns to put a tampon in after an embarrassing incident with her pad in the camp’s pool and also befriends Natalie (voiced by Josie Totah), a camper who is transgender and recently came out. By the end of the summer, Nick and Andrew mend their friendship after being brought together by — what else — Andrew’s severe constipation.

Missy Begins To Explore Her Blackness

When Missy and her parents take a trip to visit her dad’s family in Atlanta, Missy’s cousins Lena and Quinta encourage her to embrace her Blackness, convincing her to trade in her overalls for jeans and to get braids. This causes friction in her relationship with her “color blind” parents and also leads her to befriend DeVon, a Black classmate who teaches her about code-switching. Eventually, Missy realizes that she doesn’t have to sacrifice any part of herself — an epiphany that sets the stage for Missy to transition voice actors from Jenny Slate to Ayo Edebiri.

Nick first meets Tito the Anxiety Mosquito at summer camp when he’s worried about being left out of Seth and Andrew’s burgeoning friendship. Though Nick is the Anxiety Mosquito’s main target throughout Season 5, the creature also appears to both Andrew and Jessi — sometimes joined by his colleague the Depression Kitty.

Jay And Lola Date (And Break Up)

Jay and Lola begin dating and develop a relationship that’s both disgusting and surprisingly tender. In one of their more endearing moments, Jay learns how to finger Lola by letting her guide him and prioritizing her sexual desires. However, the two break up at the end of the season after Jay tells Lola he loves her and she can’t say it back right away. Naturally, this leads them to declare war on each other.

When Jessi moves to New York City with her mom, she has trouble adjusting to her rigorous new school and making friends. Soon, she meets and starts dating an older boy named Michael Angelo (voiced by Sterling K. Brown), a hot but vapid British street artist. He later tries to coerce Jessi into giving him a hand job because he has “blue balls,” and dumps her after she sees his penis and laughs uncomfortably.

The PEN15 Actors Make A Cameo

In the fourth episode of the season, PEN15 stars Anna Konkle and Maya Erskine guest star as Izzy and Misha, two 7th grade girls who Nick and Andrew are trying to woo. They aren’t exactly the same as their PEN15 counterparts Anna and Maya, but the similarities are undeniable (and entertaining).

Matthew Comes Out To His Parents

Matthew has always been close with his mother, but their relationship becomes strained after she looks at his phone and realizes that he’s gay. When Matthew comes out to his dad, he’s shocked by how supportively he responds, reassuringly telling his son that he already knew he was gay.

After Jessi’s parents decide to have her leave New York City and go back to live with her dad, they also sign her up for therapy. Although Jessi is initially hesitant to open up to her toad-obsessed therapist, she eventually warms to her after meeting the Gratitoad (voiced by Zach Galifianakis), an anthropomorphized toad who helps her develop a gratitude practice to better manage her depression and anxiety.