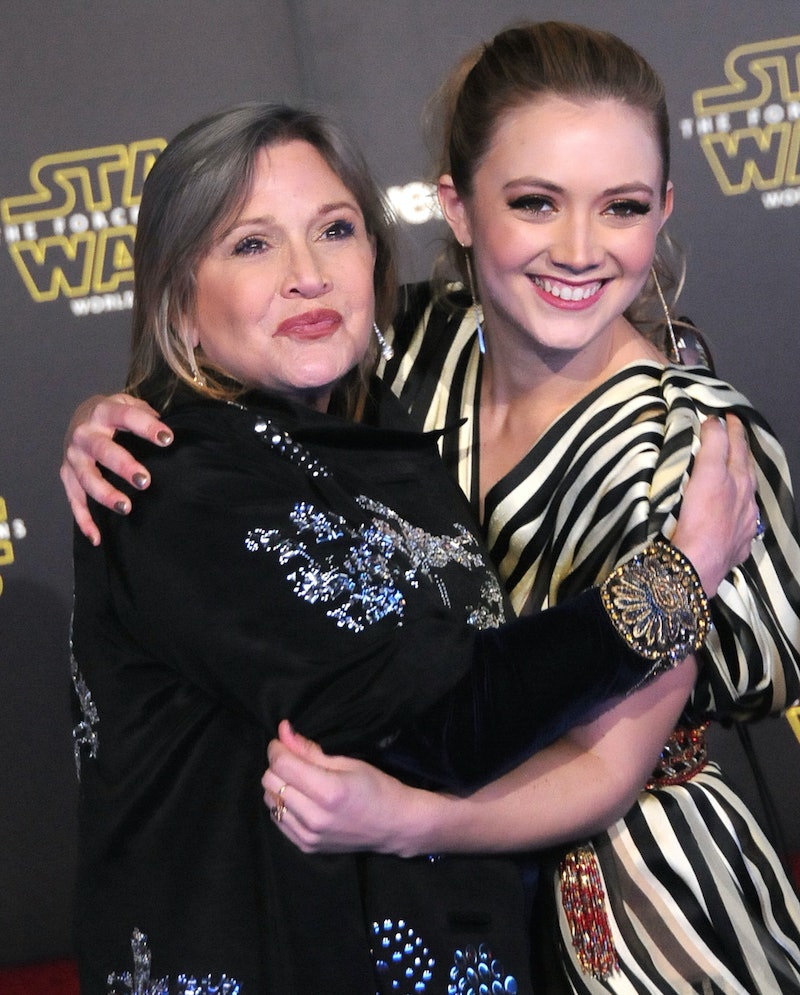 Billie Lourd is still grieving the loss of her mother, the late Carrie Fisher, five years after her untimely death. On Monday, Dec. 27, while on vacation in Australia with her fiancé Austen Rydell and their son, Kingston Fisher Lourd Rydell, the Booksmart actor shared a photo of her and the Star Wars icon on Instagram from one of their past trips down under. In the caption, Lourd revealed that, to this day, she finds herself “in a different stage of grief in each moment of every day.”

“My grief is a multi-course meal with many complicated ingredients,” Lourd, 29, wrote next to the photo of her as a young child posing with Fisher and a koala bear. “An amuse-bouche of bargaining followed by an anger appetizer with a side of depression, acceptance for the entree, and of course a little denial for dessert.” She went on to explain that she goes through many different emotions “all at once,” but grief ultimately looks different for everyone experiencing it.

“There is no ‘should’ in grief,” the American Horror Story star continued. “Grief is just whatever it is for you and that is how it ‘should be.’” Elsewhere, she explained why her post came one day early. “For anyone wondering why I’m posting this on the 26th, it’s the 27th here down unda,” she wrote. “So what better thing to post for my Momby’s Australian death anniversary (4 words I never thought I’d be putting next to each other?!?) than this picture of her and I with a koala!?”

Lourd also honored her late mother by singing Fleetwood Mac’s “Landslide” with singer-songwriter sister duo Kaitlyn and Mady Dever. “The ✨Take your broken heart and turn it into art bathtub series✨ goes down down unda!” she wrote before reminding her followers that it’s been five years since Fisher’s death. The actor, who played the legendary Princess Leia, died in 2016 at age 60 after suffering a heart attack on a flight from London to Los Angeles. Per the Associated Press, Fisher’s death was caused by sleep apnea and other factors. Coroners also found signs that the actor had reportedly taken “multiple drugs.”

“On days like this I like to be with people I love (big shout out to these literal and vocal angels @kaitlyndever and @madydever ❤️ I love you both more than any Instagram words could ever express) and to do something we loved to do together,” Lourd continued. “We loved to sing. We loved Fleetwood Mac. We loved this song.” She went on to say that the track used to play in her living room when she was a child, and when it came on recently, the lyrics spoke to her “more than they ever had before.”

“I didn’t know who to be or what to do after my mom died,” the Billionaire Boys Club actor explained. “I was afraid of changing because I had built my life around her. Then she was gone.” Although life without her mom hasn’t been easy, time has helped heal the pain. “I never stop missing her but I have gotten stronger with each passing year. And if you’re going through something similar time will make you bolder too,” she wrote. “Sorry for this cheesy lyric analysis. But it’s true!!! Sending all my strength to anyone in the #griefgang who needs it.”