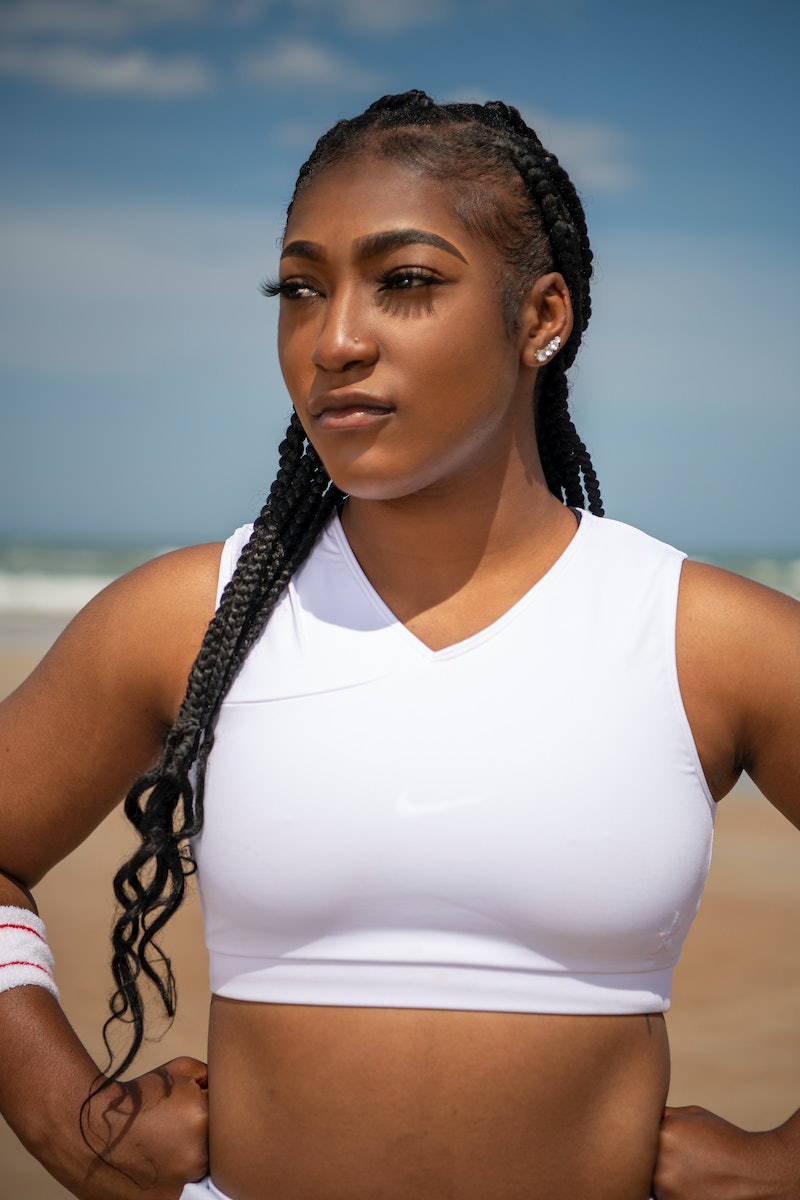 Cheer Season 2 picks up with Navarro favorites returning for another shot at Daytona, rookies figuring out where they fit in amid the squad’s mainstream fame and the complications that come along with it, and Trinity Valley Community College leveling up like never before. Hailing from Atlanta, Georgia, is Angel Rice, TVCC’s not-so-secret weapon when it comes to tumbling and just what the team needs to edge out Navarro.

For those who are unfamiliar with the cheerleading world outside Navarro, Angel is a cheerlebrity, having been praised as “the Madonna of cheerleading” and the “Simone Biles of cheerleading.” The 24-year-old has set a world record, appeared on national television in her own right before Netflix, won multiple world championships, and does it all with her family by her side. If you’re just as obsessed with Angel, keep reading for everything to know about the TVCC star.

Cheer fans already know Gabi Butler was the biggest established athlete who came through Corsicana, Texas, but in Athens, that honor goes to Angel. As this exclusive Netflix clip filled with Angel’s most impressive achievements shows, she’s worthy of all the praise. Not only is she a world champion four times over, but she was also on the USA Gymnastics National Power Tumbling team, ran an insightful YouTube channel, and set a Guinness World Record when she was just 16 years old. Casual.

Angel Rice Broke A World Record On The Today Show

As NBC News reported, Angel started tumbling when her mom taught her at 3 years old. She honed her skills at Jams Athletics, an organization that seeks to “bridge the gap between childcare and extracurricular activities.” At 16, Angel went on the Today show in 2015 and broke the Guinness World Record for the most double full twists performed in one minute.

When she was 17, she went viral for a tumbling competition video she posted on Instagram. As impressive as the clip might be, at the time, Angel said she’s capable of so much more. “I've done harder passes,” she told NBC. “I've done a round-off, back handspring, double-A, three whips, and then another back handspring."

In 2016, Angel told NBC she learned everything she knows from her mother, Tonya Rice. Though Tonya could only afford to send Angel’s older sister to tumbling classes, Tonya learned how to train by watching the practices and passed on the knowledge to Angel. Tonya later started working at Jams Athletics, and when Angel was 5, she started practicing there and laying the foundation for her competitive cheerleading career.

For the 2020-2021 season, the record-breaking cheerleader joined TVCC after her brother, Jaden "Jaymo" Rice. As coach Vontae Johnson said, once Angel found out Jaymo would head to Texas, she threw her hat in the ring. Of course, Vontae immediately said yes.

For those who can’t get enough of Angel after Cheer Season 2, she’s very active on Instagram, where she goes by Queen Angel Rice, naturally. From sharing pics of her shopping and vacationing on picturesque islands to behind-the-scenes clips of her working on tumbling passes, her feed is never dull.

What Is Angel Rice Doing Now?

After securing the championship in Daytona, Angel returned to TVCC and is still cheerleading for the Cardinals. In October 2021, she shared a snap of her on the field and welcomed new cheerleaders to the TVCC squad.

More like this
Hannah Ann Got Engaged 3 Years After 'The Bachelor' & The Proposal Was Dreamy
By Grace Wehniainen
Dorothy Wang & Morgan Stewart Were The Ultimate BFFs On 'RKOBH'
By Sophie McEvoy
Zach Reveals The Chaotic 30 Minutes That Were Cut From ‘The Bachelor’ Premiere
By Grace Wehniainen
Kylie Jenner Clarified How To Pronounce Her Son's New Name
By Jake Viswanath
Get Even More From Bustle — Sign Up For The Newsletter
From hair trends to relationship advice, our daily newsletter has everything you need to sound like a person who’s on TikTok, even if you aren’t.