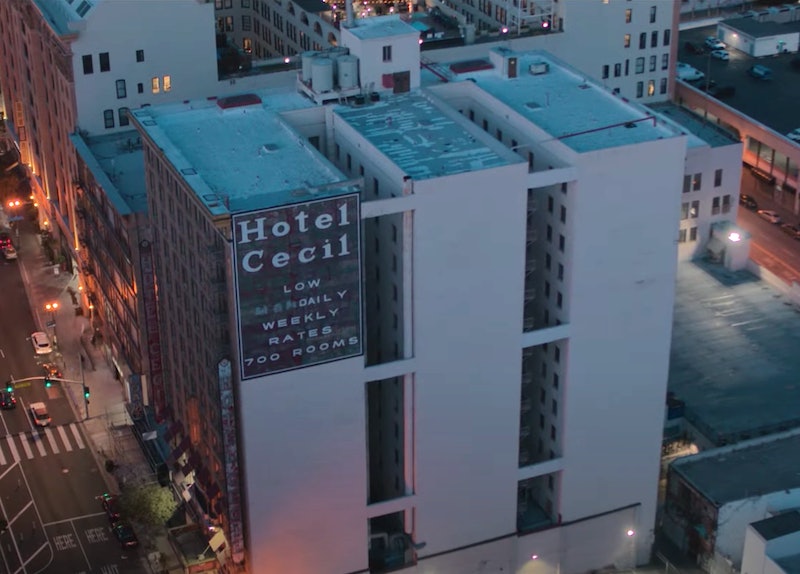 If you watched and became obsessed with Making A Murderer, Night Stalker, or Unsolved Mysteries, you'll definitely want to check out Netflix's latest true-crime docuseries, Crime Scene: The Vanishing At The Cecil Hotel. Directed by Joe Berlinger, who also directed Confessions With A Killer: The Ted Bundy Tapes, the new series sets out to explore locations notoriously laden with mysterious modern crimes. The first season is a deep dive into the Cecil Hotel, located in downtown Los Angeles and long-known as a hot spot for peculiar deaths — and for providing hospitality to several serial murderers, including Night Stalker subject Richard Ramirez.

The hotel, which partially inspired American Horror Story's Hotel and 1984 seasons, has been the location of many gruesome murders. However, the inaugural season of Crime Scene mainly focuses on the death of 21-year-old Elisa Lim, who passed at the hotel on Feb. 19, 2013. A then-college student, Lim disappeared during a stay at the Cecil, igniting interest from mainstream media and internet true crime fans. Throughout its four episodes, Crime Scene: The Vanishing At The Cecil Hotel dives into Lim's story as well as many other mystifying tales from the infamous L.A. hotel.

Berlinger recently gave an interview to Netflix about the forthcoming series. "Over the years, I’ve done lots of work in the true crime space, and I’ve mostly been focused on individual crimes and criminals. I’ve always been fascinated by what can make a certain place a nexus of crime," said the director. "The Cecil was a jewel in L.A. when it was built in 1924, so we wanted to examine how it fell into disrepair, which is directly related to the social and cultural changes that happened in Downtown Los Angeles over the course of nearly a century. And our entry point into that larger story is through Elisa Lam’s case."

Amy Price worked as Cecil Hotel's general manager from 2007 to 2017 and also spoke to Netflix ahead of the docuseries' release. When she first heard about the open position, she accepted the job with no knowledge of the location's bloody history.

"There wasn’t even an interview. One of my girlfriend’s husbands needed help at the hotel, and I wasn’t working at the time, so I said, 'Well, I’ve got the time. I’ll do it.' That’s how it all started," recalled Price. It wasn't long before someone passed away while she was on the clock. "It was just so shocking. I remember asking one of the other employees, 'Does this happen a lot?' He said yes. And that was just the first. I saw around 80 deaths over my 10 years there."

If you're already thirsty for more creepy details, Crime Scene: The Vanishing At The Cecil Hotel hits Netflix on Feb. 10.