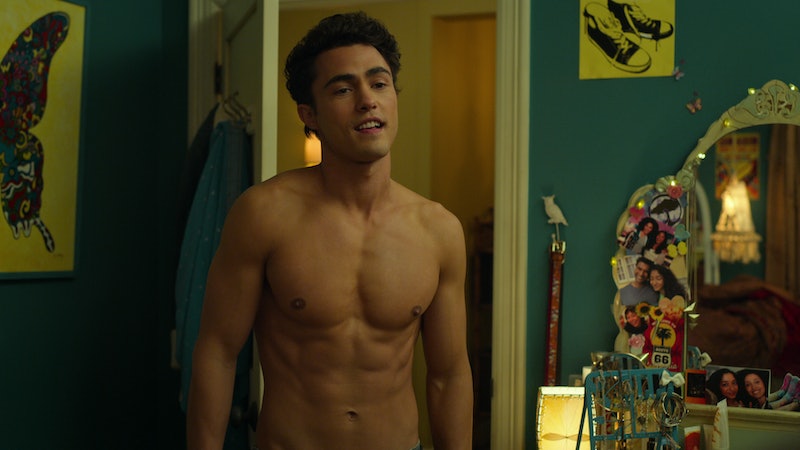 If you’ve watched Never Have I Ever Season 2, you already know that Devi tried and failed to juggle two boyfriends at once: the snarky-but-smart Ben Gross and the lazy-but-cool Paxton Hall-Yoshida. Fortunately, it seems that some of the actors on the show are much better at relationships IRL than they are on TV. Darren Barnet, for example, the 30-year-old actor who plays teenage heartthrob Paxton on the hit Netflix series, appears to be in a serious relationship at the moment.

While it seems as though Barnet likes to keep his love life on the down low, he did share a photo recently in honor of his girlfriend’s birthday. Barnet appears to be dating 37-year-old entertainer Mikaela Hoover, who will star alongside him in Netflix’s upcoming romantic comedy Love Hard. “Happy birthday, love,” he wrote on July 12 alongside a goofy photo of them lounging around. “Today is for you.” Hoover shared the same photo to her Instagram feed for Barnet’s birthday in April. “You make me happy,” she wrote. “Happy Birthday Angel.”

You’ll have to do some more digging if you want to see more evidence of Barnet and Hoover’s relationship on social media. In May, for example, the Never Have I Ever actor shared a carousel of photos and videos on Instagram from the couple’s visit to the Global Wildlife Center in Louisiana. Upon scrolling through, you’ll notice an adorable photo of the pair laughing together, as well as a clip of Hoover feeding a giraffe and kissing it on the nose.

“Thank you so much @globalwildlifecenter and @seanjeanfreau for such an amazing experience,” Barnet captioned his post. “These animals are so well taken care of and loved and this was a dream come true. If anyone visits Louisiana you have to make time for a visit. Absolutely life changing.” Hoover doubled down in the comments. “One of the greatest experiences ever,” she wrote next to a red heart emoji. “So grateful.”

Considering how private the couple is about their relationship, we can only use the Instagram evidence to make educated guesses about how long they’ve been dating and what sparked it all. We know they’ve been dating since at least April since that was the first time they posted about each other on social media. And considering they co-starred together in Love Hard, which is set for release later this year, it’s very likely that the two lovebirds met on set.

In the upcoming flick, a young woman from Los Angeles will fly across the country to surprise one of her dating app matches for Christmas. Unfortunately, she’ll arrive to find out that the guy she fell in love with over the phone was a total catfish. Barnet will play a character named Tag, and Hoover will play a woman named Chelsea. Nina Dobrev will also star in the rom-com as the main character, Natalie Bauer.

While it remains unclear what exactly Barnet and Hoover’s storylines will be in the upcoming Netflix movie, what is clear is that, unlike the film’s main characters, the two are not catfishing each other. With only a few photos posted on social media so far, it’s evident that this couple is the real deal. And after two seasons of watching Paxton play with Devi’s heart on Never Have I Ever, we’re so happy to see that things are working out far better for him in real life.