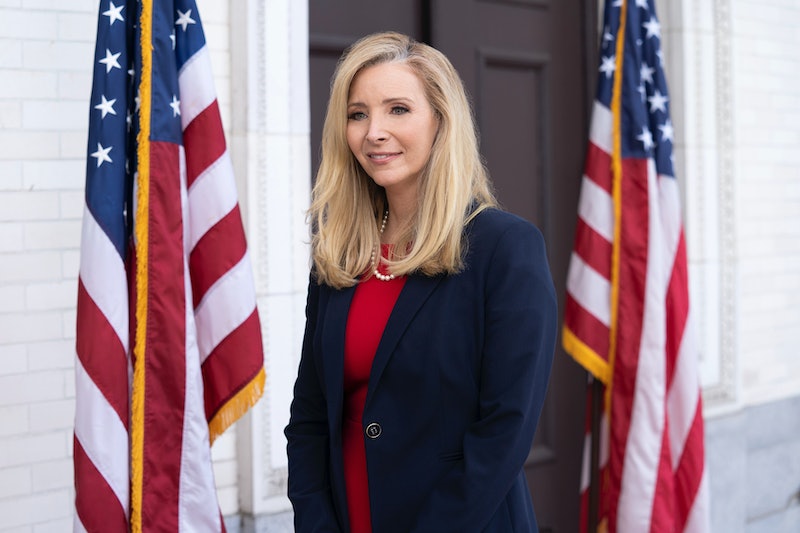 Who better to satirize the horrors of 2020 than the creators of Black Mirror? To cap off a year that could have easily worked as the plot for one of the show's episodes, series writer Charlie Brooker and executive producer Annabel Jones are releasing Death to 2020, a one-hour special premiering on Dec.27 that Netflix describes as a "cathartic comedy event you’ll never forget about the year you really, really don’t want to remember."

Narrated by Laurence Fishburne, Death to 2020 features a celebrity cast as characters being interviewed about the events of 2020. The trailer promises "unprecedented" access to experts, politicians, and average citizens as they tell "the definitive story of the most historic year in history." In a statement to The Hollywood Reporter, Brooker teased that the special is "quite a bit sillier than it sounds." "I don’t love the word 'satire' but there’s some of that here, alongside some angry jokes, and some goofy jokes," he said. "And hopefully viewers will find at least one joke to their liking — because let’s face it, in 2020, any laugh you can emit, no matter how fleeting, is a small but precious victory."

If revisiting the special hells of 2020 doesn't exactly sound, uh, ideal, the A-list cast might sway you to watch. Here's everyone you can expect to see.

The Oscar-nominated actor behind the MCU's Nick Fury plays a reporter for New Yorkerly News, and he means business. "Don't be filmin' this for one of those casual introductory shots, please," Dash demands in one scene. "Sh*t's demeaning."

Fresh off his turn as Jonathan Fraser in HBO's The Undoing, Grant stars as history professor Tennyson Foss. "I'm pretty repellent actually," the actor recently teased to Vulture of the character, promising, "You'll like my wig."

The Big Sick's Academy Award-nominated actor and screenwriter appears as the CEO of a tech company called Shreekr.

The Mrs. America actor, who's already won six Emmys over the course of her decades-long career, stars as a British monarch who needs no introduction.

Kayo, who portrays a scientist in Death to 2020, is a London native who most recently played Elton in Amazon's British comedy-horror series, Truth Seekers.

The Friends alum plays a "non-official" conservative spokesperson and author of the book, Conservative Voices Are Being Silenced.

A British actor and comedian known for her comedy persona of Philomena Cunk, Morgan previously teamed with Brooker for his review series Charlie Brooker's Weekly Wipe. Her Death to 2020 character is simply described as "an average citizen."

The Saturday Night Live alum and Supermarket Sweep host stars as behavioral psychologist Dr. Maggie Gravel, who has an extremely apt assessment of 2020: "I'd say it was a trainwreck and a sh*t show, but that would be unfair to trains and sh*t."

Keery (aka Steve Harrington from Stranger Things) takes on the role of a "gig economy millennial."