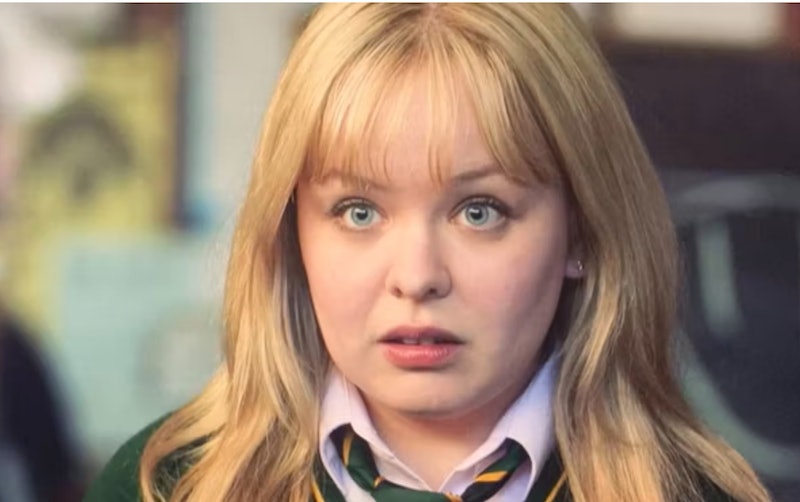 She earned a legion of fans worldwide as Derry Girls’ resident voice of caution, Clare Devlin. But as it happens, Bridgerton actor Nicola Coughlan is just as accident-prone as her calamitous schoolmates from the show. Taking to her Instagram story, the 35-year-old posted a picture that will instantly warm the hearts of Derry Girls fans — and may well confuse those few who have yet to watch the Channel 4 drama.

Coughlan shared a sombre black and white image of a headless Child of Prague figurine. Making reference to the fact that Clare and her pals demolished that very religious statue during an episode of the show, the actor captioned the moment: “Life imitates art.”

The Child of Prague — a flamboyantly dressed statue of Jesus as a child — first became a common household fixture in Ireland when it was introduced in the 18th Century, and all kinds of folklore and superstition surrounds the now ubiquitous decoration. Stick one under a garden bush before your wedding day, for instance, and you’ll be blessed with good weather. Move over, Met Office.

Coughlan’s tongue-in-cheek post throws back back to a memorable plot arc from Season 2, in which the Derry Girls get revenge after they suspect that their favourite new teacher — the wine-chugging, sophisticated Ms De Brún — has been fired. In a bid to force the hand of Sister Michael (Siobhán McSweeney) to reinstate the teacher, they come up with a genius and completely foolproof plan: kidnapping the nun’s beloved Child of Prague statue and blackmailing her with a ransom note.

Unfortunately, the abduction goes horribly awry, and the Derry Girls accidentally behead the Child of Prague when he topples over. After a panicked attempt to repair him ensues, they’re caught red handed thanks to an upside down head, and Sister Michael is furious that they’ve desecrated a holy statue of the Christ Child. Even at the time the episode aired in 2019, scores of amused Irish and Northern Irish viewers with similar experiences chipped in with their own childhood nightmares. One such fan asked: “Surely every Child of Prague statue has a glued-on head?”

Well, now it looks like even Nicola Coughlan has joined the club.

More like this
This 'Bridgerton' Polin x 'Love Island' Crossover Is Everything
By Darshita Goyal
The Sean Bean Intimacy Coordinator Controversy, Explained
By Sam Ramsden
Prince Charles Revealed What He *Really* Thinks Of 'The Crown'
By Sam Ramsden
Sean Bean’s Wife Starred In Your Favourite Childhood Show
By Sophie McEvoy
Get The Very Best Of Bustle/UK