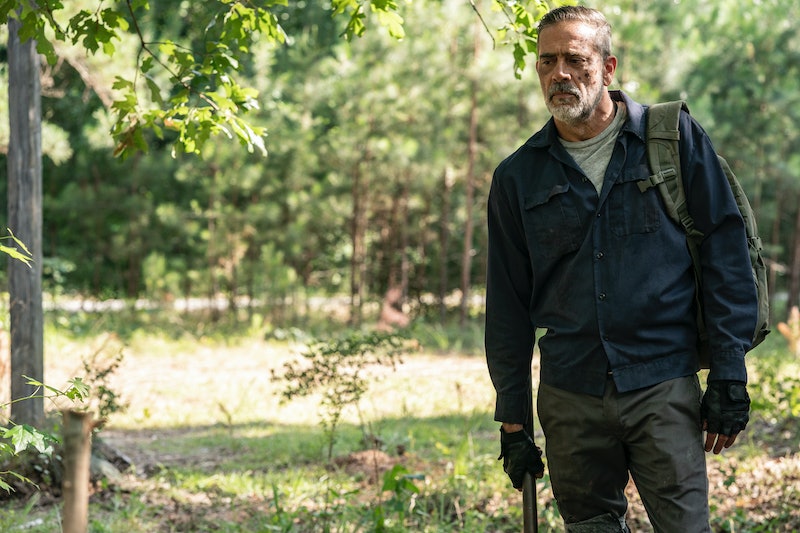 Spoilers ahead for The Walking Dead Season 11, Episode 9. It’s a testament to Jeffrey Dean Morgan’s subversively charming performance as Negan that you can’t help but to want to defend him in his ongoing feud with Maggie. After all, he killed her husband four seasons ago!! There should be one clear person to root for. But here we are.

In The Walking Dead’s midseason premiere, Maggie initially agrees to let the last few Reapers live — provided that they stay far, far away. However, she later goes rogue and kills them all except for Leah. This makes Negan pretty nervous. “When it comes to me, promise or not, it’s just a matter of time before you make the same call,” he says, referencing Maggie’s half-hearted promise not to kill him last year. “I ain’t gonna give you the chance to do that. I’m gonna be on my own way.” With that, he quietly walks away from Maggie and into the woods alone.

It’s an understandable move. No matter how much he’s tried to change, Negan will never know real peace with this group — especially not with Maggie as the leader. However, this is Walking Dead’s final season. Does this mean that’s the last we’ll ever see of Negan? Not necessarily.

In the Walking Dead comics, Negan is one of the very few characters who makes it to the end. Like in the show, he does set out on his own following a tense confrontation with Maggie. And after a 20-year time jump, it’s revealed that he lives by himself. However, he hasn’t completely cut off ties with the entire group. In fact, Carl kindly visits Negan and keeps him stocked up on supplies. Though we don’t actually see the two interact in the final issue (which serves as a sort of epilogue for the whole series), Carl says the provisions are getting used — suggesting Negan is grateful for the gesture in his own hermity way. Carl also references an “unspoken thing” between himself and Negan, one of the few people who knew Rick when he was alive.

Negan and Judith seem to have a similar bond on the show, given Carl’s absence. So even if Negan has removed himself from the group for now, there’s a very good chance that we’ll see more of him — and maybe a reunion with Judith — before The Walking Dead ends later this year.

Until then, it’s probably a good thing that Negan is taking a backseat — for Maggie’s sake, anyway. The Commonwealth is finally here, and judging by that time jump at the end of Episode 9, the new group will bring more than enough conflict to keep her busy.

More like this
Netflix Shut Down 'Bridgerton' S3 Rumours About A “Very Dark” Storyline
By Bustle
Everything To Know About 'RHONY' Season 14
By Jake Viswanath, Alyssa Lapid and Brad Witter
Bill & Frank’s 'The Last Of Us' Episode Has Twitter Emotionally Wrecked
By Alyssa Lapid
9 Time Catherine Cawood Was An Absolute Badass In Happy Valley
By Sophie McEvoy
Get Even More From Bustle — Sign Up For The Newsletter
From hair trends to relationship advice, our daily newsletter has everything you need to sound like a person who’s on TikTok, even if you aren’t.