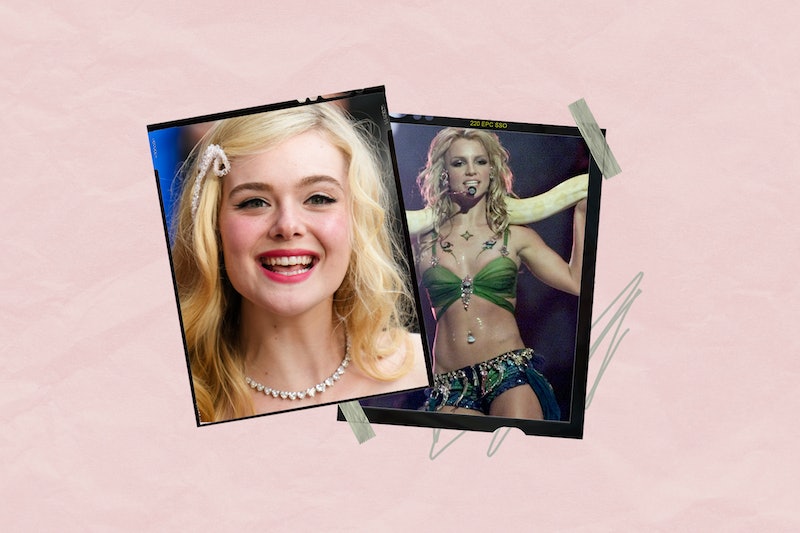 With spooky season well and truly upon us, the annual influx of celebrity Halloween costumes has already begun. Last year, social media were treated to snaps of Harry Styles as Dorothy from The Wizard of Oz, Lizzo as Baby Yoda, Kendall Jenner as a Mars Attacks martian, and Cardi B as Morticia Addams. Now, Elle Fanning has finally unveiled her Britney Spears Halloween costume from 2021, and the resemblance is uncanny.

In an Instagram post shared on Oct. 2, The Girl from Plainville star uploaded a series of photos taken during last year’s Halloween celebrations, along with the caption, “Ghosts of Halloween past.” Wearing a green top, shorts, boots, and a false snake around her neck, Fanning’s costume is a clear recreation of Spears’ memorable 2001 MTV Video Music Awards appearance, during which the singer performed “I’m a Slave 4 U” at New York City’s Metropolitan Opera House while famously holding an albino python.

Fanning’s efforts didn’t go unnoticed by fans, many of whom praised the actor’s Spears-inspired costume. “Wow, you’ve done Brit justice,” one user commented, while another joked, “I thought the snake was real for a moment.”

A string of celebrity admirers were also quick to share their thoughts on Fanning’s Halloween look. “This costume is fantastic,” wrote Chloë Grace Moretz, while Paris Hilton simply commented, “Iconic.”

The Emmy award-nominee isn’t the only famous face to have recreated some of Spears’ most iconic looks on Halloween. In 2021, Hailey Bieber showcased her “Baby One More Time” costume, complete with the pop princess’ instantly recognisable school uniform and pigtails from the 1998 music video. Spears later showed her appreciation for Bieber’s costume, writing in a since-deleted Instagram post, “She was me for Halloween ... how freaking cool is that?”