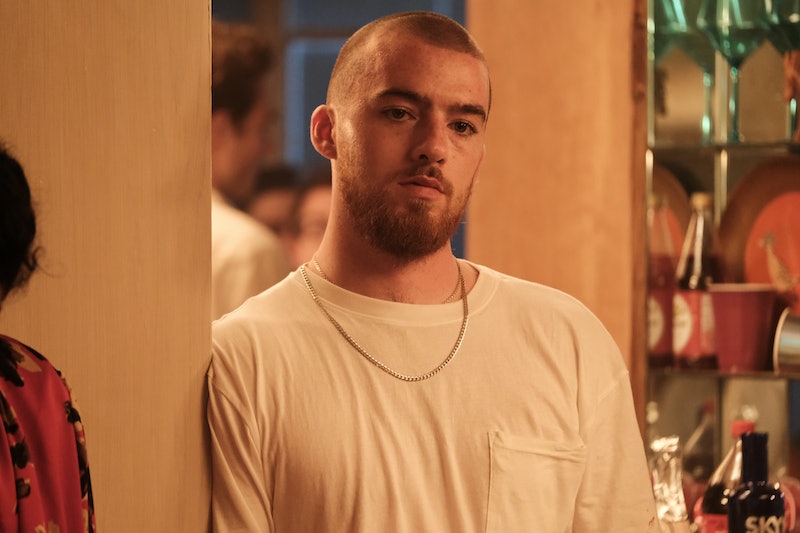 Following the tender and dialogue-heavy bridge episodes that aired last year, Euphoria Season 2 opens with more of a bang. Quite literally, as we see Fezco’s grandma, a gun-toting drug dealer, shoot her own son in order to gain custody of Fezco (Angus Cloud) when he was a kid. She invoked this violence-solves-everything ethos throughout his childhood, which has clearly impacted the way Fezco handles conflict now; the Season 2 premiere ends with him bashing Nate’s (Jacob Elordi) face in.

The episode also reintroduces us to the other characters at a messy New Year’s Eve party, where several conflicts and new couplings arise. Nate and Cassie (Sydney Sweeney) hook up unbeknownst to Maddy (Alexa Demie); Fezco and Lexi spend the night flirting; and Rue (Zendaya) meets a new friend and finally makes up with Jules (Hunter Schafer). These developments open the door to a number of theories about what’s to come in Euphoria Season 2. Let’s break them down.

Lexi & Fez will get closer

Though Season 1 hinted that Lexi had feelings for Rue, she bonds with Fez over discussions about God and religion at the New Year’s Eve party. He admits that listening to her explain the origins of Christmas was the highlight of his year and later asks for her number. Lexi appears pleased by this, but it’s unclear if their relationship will blossom into something romantic. Lexi looked pretty disturbed watching Fez beat up Nate, and in the Season 2 trailer, a scene of her typing on her laptop is intercut with one of her telling Fez that she’s “doing something for [herself]” for the first time in her life. This could mean she and Fez end up together, or it could mean that he’ll simply inspire her to focus on college or a creative outlet — like the play we see a glimpse of her directing, if that is indeed real and not a dream sequence.

Fez will reconsider his lifestyle

Fez’s grandma taught him how to take care of himself, but also how to avoid consequences. When he was a kid, she would dodge criticism for bringing him along on drug deals by saying that he was her “business partner” — a talking point that’s mirrored when Fez tells Laurie’s men the same thing about Ashtray. Fez also deflects questions about Rue’s drug use by saying that she’s “family,” hinting he’s afraid to admit how he’s enabled her substance misuse.

Fez reasons this all away using an analogy his grandma taught him after his uncle died at McDonald’s: it’s the individual’s fault, not the supplier. Yet when he repeats the story to Lexi, she counters with, “But if I were God, I don’t think I’d let the McDonald’s CEO into heaven.” He admits she’s right, which could lead Fez to reconsider his life as a drug dealer.

Rue will get tangled up in Fez’s business

Rue was dragged into the house when Fez went to meet with Laurie, and it appears that it won’t be the last time she winds up there. The trailer shows Rue going to meet up with Laurie again, and in another scene, she appears to get out of the car just as a huge truck pulls up before cutting to Gia tearfully screaming. This suggests that Rue somehow gets mixed up in the drug business and in over her head.

Rue’s relationships will get rockier

When Rue and Jules finally meet up again at the party, Rue initially blames Jules for her relapse, but later apologizes when she sees how this hurts Jules. The two then appear to make up, but the way the camera lingers on their pained faces suggests they have a lot more to work through. It hasn’t been that long since Rue relapsed, and she lied to Jules about her drug use. Jules also clearly still feels pressured by the way Rue seems to hinge her sobriety on their relationship.

Rue’s new friend Elliot, another drug user she meets at the party, will create another point of contention, as Jules likely won’t be pleased that Rue is hanging out with someone who indulges her worst habits.

Fezco will go to jail

Assuming Nate survives the beating, he very well could throw all his money into enacting revenge and ensuring Fez goes to jail. There are glimpses of what looks like a huge drug bust in the trailer, which could be the result of Nate calling the cops on Fez and his whole operation (again).

Kat & Ethan will break up

Is it possible that Kat no longer wants to be with the sweet-natured Ethan? In the final moments of the episode, when each of the characters look directly into the camera, Kat appears a little unhappy or trapped. Perhaps she just wasn’t the feeling the party, but really, Euphoria, can’t we have just one good thing?

Though Cassie somehow managed to stay hidden from Maddy in the bathtub after hooking up with Nate, she clearly knows she crossed a line by having sex with her best friend’s ex. And when Maddy does find out, Cassie will have to bear the weight of her wrath. “I think more than anything, she’s deeply, deeply, deeply hurt by the situation and feels completely betrayed,” actor Alexa Demie teased to Bustle of Maddy’s reaction in a recent interview. “But she also gets really angry, and we’ll see that.”