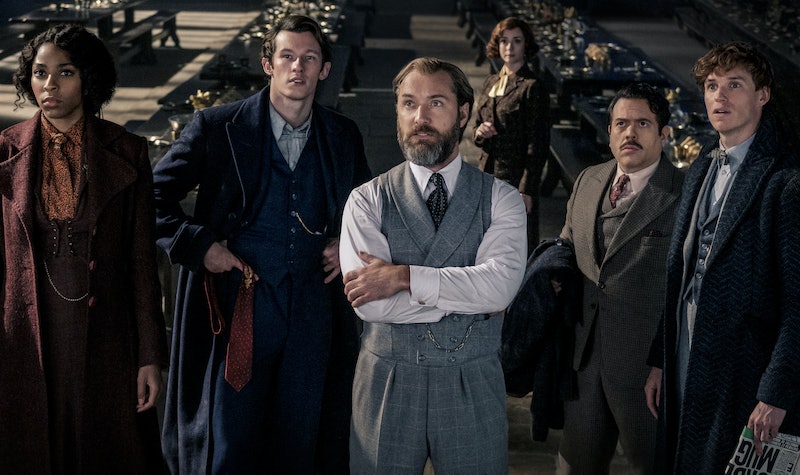 Fantastic Beasts: The Secrets of Dumbledore had a less than ideal opening weekend. The third installment in the Fantastic Beasts series brought in $43 million domestically in the days after its April 15 premiere, which, according to Variety, was one of this year’s more successful North American debuts — and an all-time low for the entire Wizarding World franchise. And while reviews for The Secrets of Dumbledore were slightly better than those for its predecessor, The Crimes of Grindelwald, critics still weren’t raving about the film.

The film’s box office performance may have been affected by the myriad controversies the Harry Potter-verse has faced in recent years. Among the laundry list of things the franchise has been criticized for: cutting LGBTQ+ content from the new movie for its China release, star Ezra Miller’s recent arrest in Hawaii, J.K. Rowling’s anti-trans statements, and former Fantastic Beasts star Johnny Depp’s forced departure amid domestic abuse allegations.

Below, a closer look at all the controversies plaguing the Fantastic Beasts franchise.

Warner Bros. Pictures, the film studio associated with the Wizarding World, removed two lines that reference the romantic relationship between Albus Dumbledore (Jude Law) and Gellert Grindelwald (Mads Mikkelsen) for the film’s China release. Per news.com.au, the two lines in question — which amount to six seconds of dialogue — ​​are “because I was in love with you” and “the summer Gellert and I fell in love.” The edit was made at the country’s request.

“As a studio, we’re committed to safeguarding the integrity of every film we release, and that extends to circumstances that necessitate making nuanced cuts in order to respond sensitively to a variety of in-market factors. Our hope is to release our features worldwide as released by their creators but historically we have faced small edits made in local markets,” a Warner Bros. spokesperson told Variety. “We want audiences everywhere in the world to see and enjoy this film, and it’s important to us that Chinese audiences have the opportunity to experience it as well, even with these minor edits.”

The studio’s comments were not received well by many Twitter users. Writer Mark Harris tweeted in response: “It'd be great if Warner Brothers could put an exact dollar-figure price tag on selling out gay people, just for clarity's sake.”

The sting of excluding references to Dumbledore’s queer love life is arguably made worse by Harry Potter author J.K. Rowling’s history of anti-trans views. The author was first criticized for liking a tweet in 2018 that many considered to be transphobic, but the controversy began earnestly in December 2019, when Rowling tweeted her support of a British woman who lost her job for “offensive and exclusionary” comments towards trans women. Six months later, Rowling linked a devex.com op-ed with a headline that included the phrase “people who menstruate” to Twitter and wrote: “‘People who menstruate.’ I’m sure there used to be a word for those people. Someone help me out. Wumben? Wimpund? Woomud?”

Both tweets sparked a whirlwind of media attention, prompting responses from former Harry Potter and current Fantastic Beasts stars. In response to the backlash, Rowling doubled-down on her views by publishing an essay to her website titled “J.K. Rowling Writes about Her Reasons for Speaking Out on Sex and Gender Issues.”

“This isn’t an easy piece to write, for reasons that will shortly become clear, but I know it’s time to explain myself on an issue surrounded by toxicity. I write this without any desire to add to that toxicity,” Rowling wrote in the essay. She then detailed her “five reasons for being worried about the new trans activism, and deciding I need to speak up.” The essay was met with further criticism.

Johnny Depp Was Forced To Step Back From The Franchise

Former Fantastic Beasts star Johnny Depp, who played Gellert Grindelwald in the series’ first two films, is still in the midst of ongoing domestic abuse allegations and a slew of legal battles. It all began in May 2016, when his then-wife Amber Heard filed for divorce and filed a temporary restraining order, claiming that Depp physically assaulted her during an argument at their Los Angeles residence.

In Dec. 2017, after some fans criticized the franchise for keeping Depp in the cast Rowling publicly defended the actor and his involvement in the first two Fantastic Beasts films. “Based on our understanding of the circumstances, the filmmakers and I are not only comfortable sticking with our original casting, but genuinely happy to have Johnny playing a major character in the movies,” she wrote on her website. Director David Yates also offered his support in a separate statement.

However, nearly three years later, Depp left the franchise. The decision was made after the actor lost a libel lawsuit against the Sun, which published an article that referred to Depp as a “wife beater.” In a statement posted to Instagram in Nov. 2020, Depp wrote: “I wish to let you know that I have been asked to resign by Warner Bros. from my role as Grindelwald in Fantastic Beasts and I have respected and agreed to that request.” The statement continued: “The surreal [judgment] of the court in the U.K. will not change my fight to tell the truth and I confirm that I plan to appeal … My resolve remains strong and I intend to prove that the allegations against me are false. My life and career will not be defined by this moment in time.”

Warner Bros. later announced that Rogue One actor Mads Mikkelsen would replace Depp as Gellert Grindelwald in Fantastic Beasts: The Secrets of Dumbledore.

As if Fantastic Beasts didn’t already have enough problems, franchise star Ezra Miller, who plays Credence Barebone/Aurelius Dumbledore, is currently facing heat for another instance of disorderly conduct. Reportedly, the allegations could affect their future with the film series.

Fans first became concerned about Miller in April 2020, when a short video surfaced on Twitter of the actor putting their hands around the neck of an unknown woman at a bar in Reykjavik, Iceland. In the clip, someone is heard saying “Oh, you wanna fight? That’s what you wanna do?” to a young woman, who is jokingly assuming a fighting stance. Then, the assailant the girl by the neck and pushes her to the ground. A source confirmed to Variety that it was Miller who attacked the woman, adding that they’d been escorted from the bar after the incident.

Less than two years later, Miller made headlines again for misconduct. On March 27, 2022, Miller was arrested on charges of “disorderly conduct and harassment,” according to a Facebook post from the Hawaii Police Department. The incident occurred at a bar in the Big Island, where Miller “became agitated while patrons at the bar began singing karaoke,” after which they “began yelling obscenities and at one point grabbed the microphone from a 23-year-old woman singing karaoke … and later lunged at a 32-year-old man playing darts.” Miller was released on bail shortly after, with help from a couple they were staying with. However, hours later, the same couple who bailed Miller out filed a complaint against the actor. Per People, the court document alleges that Miller “burst into the bedroom of the petitioner(s) and threatened” one of the victims by saying “I will bury you and your sl*t wife.” The couple who filed the complaint also claim that Miller stole some of their personal property, including a wallet, passport, social security card, and more. On April 11, at the request of the couple, a judge dismissed the complaint.

On April 19, Miller was again arrested in Hawaii, this time “on a complaint of second-degree assault following an incident at a home in Pāhoa,” per KITV, the local ABC affiliate news station. Allegedly, Miller became angry after being asked to leave, and threw a chair at a woman’s head, leaving her with a half-inch cut. The actor was released from jail pending further investigation. Miller has yet to comment on these recent events.

More like this
Why The '365 Days' Sex Scenes Are Good, Even If The Movies Aren’t
By Arya Roshanian
At 28, Minnie Driver’s Personal Life Was “Falling Apart”
By Kate Dwyer
This 'Hunger Games' Alum Will Star In A New Medical Drama Titled 'A Mistake'
By Alyssa Lapid
One Powerful Quote In 'Doctor Strange 2' Is Going Viral On Twitter
By Alyssa Lapid
Get Even More From Bustle — Sign Up For The Newsletter