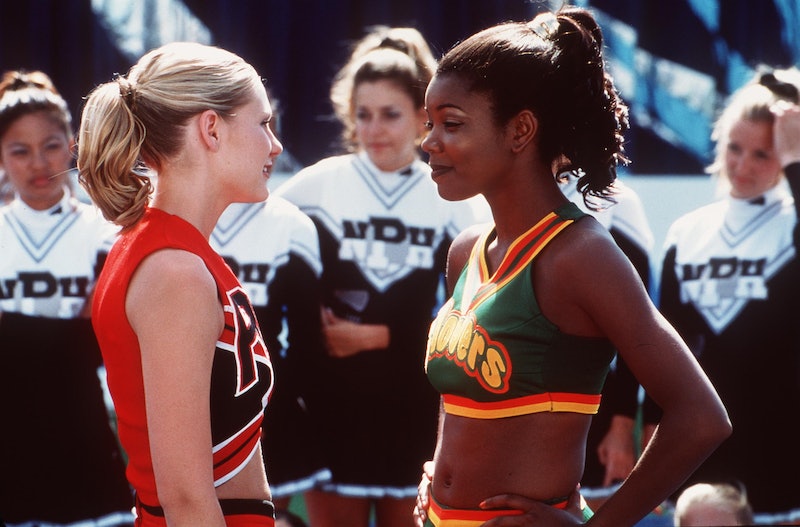 It turns out that even the stars of the most iconic cheerleading movie of all time are obsessed with Netflix's Cheer — and it might have inspired them to get the squad together once more. 20 years after the first film was released, Gabrielle Union confirmed a Bring It On sequel is "absolutely" happening, and that her costar Kirsten Dunst is also on board.

While chatting about Bring It On's 20th anniversary with James Corden on The Late, Late Show, Union surprised the host when she admitted that she is very interested in playing Isis once more. "We have [talked about it]," Union said, referencing a recent conversation with Dunst about a potential sequel. "We actually did a public panel a couple of weeks ago and they asked about it, and we all were like, 'We’re in. We’re absolutely in.'"

After confirming that a sequel is "absolutely" in the works, Union revealed that she and the rest of the cast had even come up with a potential storyline, inspired by the hit reality series, Cheer. "It’s absolutely going to happen, I think because we all got obsessed with Cheer on Netflix," she explained. "And it kind of brought back the whole love of cheerleading. And we kind of want to see where these people would be 20 years later."

This is not the first time that Union has talked about the impact that Cheer has had on a potential Bring It On sequel; back in February, she credited the series with giving cheerleading a "resurgence in pop culture" that has inspired even more of a desire to see Isis and Torrance (Dunst) face off on the mat once more. "Especially with the young man Jerry, I think people are wondering what other takes there could be with a Bring It On sequel, maybe told from a different perspective," Union told Woman's Day. "We’re always all open to it, that would be really awesome."

However, requests for a reunion or a sequel are nothing new, as Union told the outlet that she and the rest of the cast have thrown around plenty of pitches over the years. "Bring It On is the gift that has been giving for almost 20 years," she explained. "People have been wanting a sequel with the original cast and director and writers, so every so often we toss those ideas around."

And all of those conversations about a potential sequel mean that Union is far from the only original cast member to voice a desire to slip into their old Toros or Clovers uniforms one more time. "I look back and I go, wow ... if Bring It On came out yesterday and was a big hit and then they called up and said, 'Do you want to do a sequel?', I just don’t think anybody would say no," Jesse Bradford —who played Torrance's love interest, Cliff — told Bustle in 2014. "I think that sequel would have already been built into our contracts, the way things go nowadays. I think it’s funny; hindsight is twenty-twenty."

In 2019, Dunst confirmed that she would also be interested in a Bring It On reunion during an appearance on The Kelly Clarkson Show. "Listen, if they wanted to make another movie, I would make another movie," she said, to rapturous applause from the audience. "Why not? It’d be so fun!"