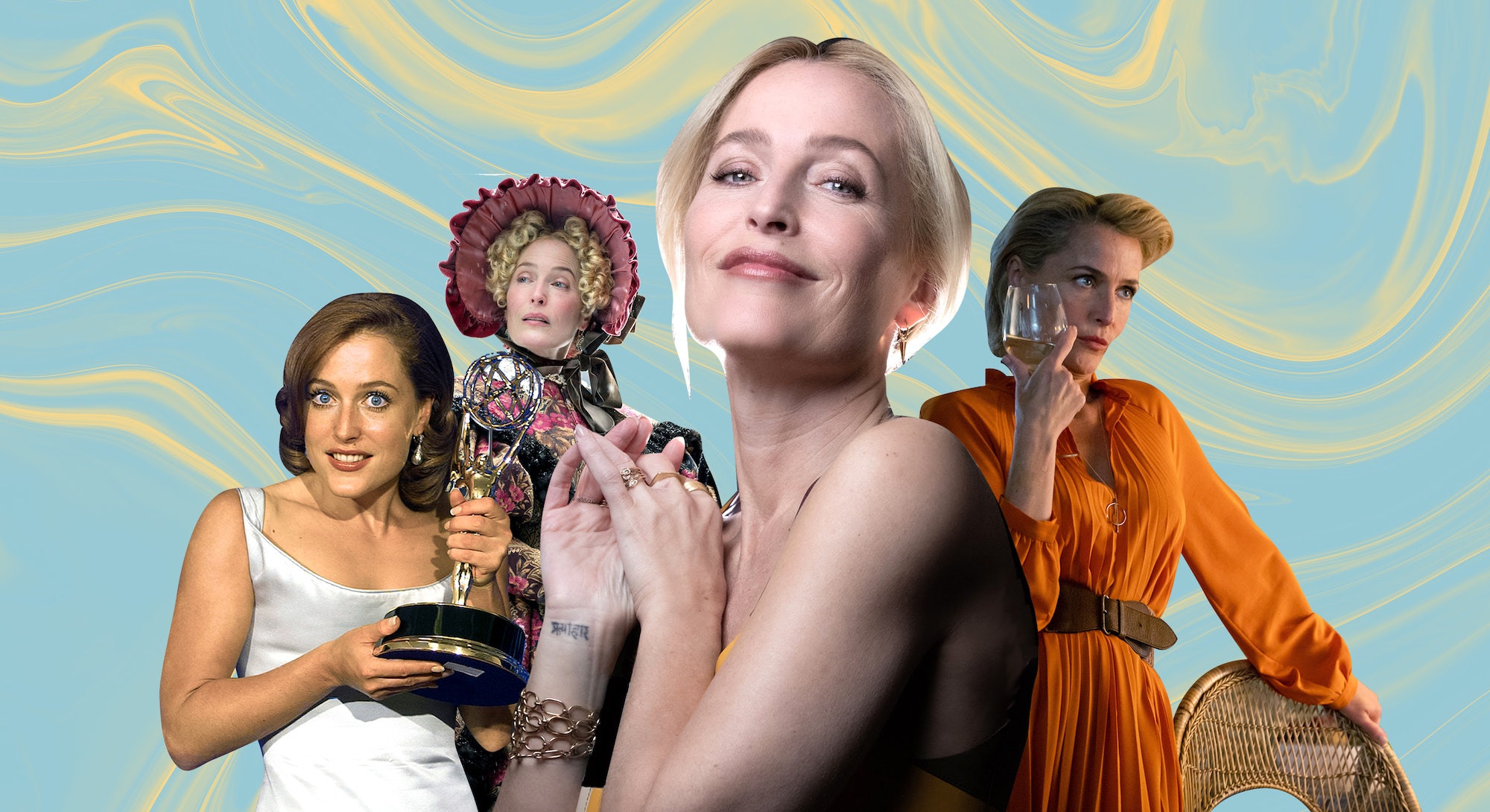 If you mention Gillian Anderson to anyone, they’ll likely start reeling off their favourite projects she’s appeared in. From her breakout role as Dana Scully in The X Files in 1993 to her portrayal of The Iron Lady, Margaret Thatcher, in The Crown, the actor is known for bringing a certain electricity to her performances. So just how does she go about choosing her roles, I ask, as we sit across from one another in a hotel room on a rainy day in London. “This may sound strange, but it’s whether it already lives inside of me. Sometimes when you read a script, it almost starts to vibrate with something inside you,” she tells me. “You know almost immediately how to play it. I don’t usually say ‘yes’ to things if there hasn’t been that connection.” However, the actor is open to making exceptions. “Sometimes you take a punt on somebody, [such as] a new director. And getting to play with people who love to play in that world is really fun.”

Anderson’s involvement in her latest project, mystery thriller The Pale Blue Eye, was a straightforward decision. “It was the chance to work with Christian Bale and [director] Scott Cooper,” the actor muses. “I was convinced before reading it that I wanted to do it. It would have had to be a really a bad script for me to say ‘no.’”

Based on the novel of the same name by Louis Bayard, the film takes us to West Point, a U.S. Military Academy, in 1830, where the talented yet tortured detective Augustus Landor (Bale) is called upon to investigate the death of a young cadet. Although it initially looks like a suicide, it’s an event that occurred after the death — whereby someone removed the heart from the corpse — that has caused concern. As a series of disturbing events follow, Landor calls upon an enthusiastic cadet who goes by the name of Edgar Allan Poe to help with the investigation. The character is a reimagining of the poet in his younger years. [Warning: Slight spoilers ahead.] Together, Poe and Landor delve into the mystery and it’s not long before the Marquis family become major persons of interest. Enter Anderson and her portrayal of the family matriarch, Julia Marquis, who begins to unravel. Although Julia is involved in practices many would deem unforgivable, it’s clear she is desperate to protect her illness-stricken daughter Lea (Lucy Boynton) and ambitious cadet son Artemus (Harry Lawtey).

Anderson came to the project with an open mind, having not previously read the novel. She was conscious of navigating the fine balance of Julia’s multifaceted character. “Part of what [the director] Scott was interested in was us playing with the different layers of how much we were revealing at any given time, so if somebody were to watch the film back again, they might get a different take from it,” the actor explains. Although the Marquis family strives to portray a mundane home life to the outside world, cracks begin to show during a disastrous dinner party.

“You get the sense that the family has had to deal with it [the deterioration of Julia’s mental health] for some time,” Anderson notes. “I think what happens is when the pressure builds up… she can’t handle the difference between fear that is just in her mind and fear that is real, and it almost makes her want to smash things up.”

Harry Lawtey, best known for his lead role in BBC One’s Industry, delivers a notable performance as Anderson’s on-screen son. When I spoke with the up-and-coming actor earlier this year, he told me how “brilliant and welcoming” both Anderson and Bale were to him during filming. Anderson smiles as I relay this to her. While she clearly makes an impact on the newer actors who work alongside her, she doesn’t see herself as a mentor. Not in the traditional sense, anyway. “I forget that I’ve been around for a while,” she laughs, noting that while she is happy to answer questions that people may ask, it doesn’t occur to her to simply dish out advice.

Anderson has found herself leading the way in Netflix’s teen drama Sex Education, where she portrays sex therapist and devoted mum Jean Milburn. Several of the young actors in the series are embarking on major careers, having gained recognition on the show. Ncuti Gatwa, whose character Eric Effiong has shared many a tender moment with Jean, is the new Doctor Who. Fans have been vocal on social media about wishing to see Anderson appear on the BBC show alongside Gatwa. “I know, I heard,” the actor says, noting that she is “incredibly proud of him.” So, is she set to make some kind of appearance in the sci-fi series? “No comment,” Anderson replies, smiling wide when I say that I’ll be keeping my eyes peeled.

In Sex Education, Anderson also shared memorable scenes with Aimee Lou Wood, who portrays Aimee Gibbs. Jean helped counsel Aimee after she endured a sexual assault on the bus in Season 2. Echoing sentiments Wood shared with me during a recent interview, Anderson notes that the powerful storyline is not forgotten in the upcoming fourth season. “It’s interesting, because she [Wood] asked for a scene with Jean, apparently,” an impressed Anderson tells me. “I thought, ‘I should ask for some scenes with actors I want to work with!’ You know what I mean? That never even occurred to me, but I should, because it worked. I’m really glad that Aimee did it.”

The end of Season 3 witnessed Jean welcoming a baby girl after a traumatic birth. And while mum and baby were recovering well, there was the little matter of a mistaken paternity left to deal with. As for what lies ahead for the beloved character, Anderson calls my attention to the age gap between Jean’s teenage son, sixth-former Otis, and her newborn. “We’re seeing a different side of Jean this season. She’s finding the balance a little challenging,” she notes. “Interestingly, I have experience with [that gap] because I have a 28-year-old daughter [Piper] and then my younger ones [Oscar, 16, and Felix, 14].”

Being old and mature enough to have enough years passed to be able to have perspective. Before I had no perspective. I didn’t know what my perspective was, and suddenly I did. It was a perspective of gratitude.

Sex Education has broken boundaries by opening up conversations surrounding teen relationships and intimacy, removing the stigma that often comes with such topics. This candidness about sex and pleasure has transcended to Anderson’s Instagram account. The actor laughs as I mention her amusing, and well-spotted, “Penis of the Day” pictures. So are these posts Jean-inspired or is this pure Gillian? “It definitely started because of Sex Education. I have all of these pictures on my phone of penises and yonis, specifically from Jean’s house on set,” she explains. “Every once in a while I would post from that perspective, a penis or yoni of the day. Then people started sending me penises and yonis, so it has kind of taken off from there.”

It’s a true show of the versatility in her range that in between filming seasons of Sex Education, Anderson delivered a remarkable performance as Margaret Thatcher in The Crown. The actor recently showed her support for the new cast, and the series’ showrunner, her former partner Peter Morgan, by attending the premiere of the latest instalment. “I think it’s phenomenal. All of the cast are brilliant. The fact [the series] has been able to keep the quality up is rare and incredibly difficult. They’ve done an amazing job,” she says enthusiastically. So, is the drama fact or fiction, I ask. Anderson’s face drops, before breaking into a relieved grin when I tell her I’m kidding. But what does she make of the constant discussion around what is and isn’t factually accurate within the series?

“It’s an odd thing. I don’t know how much of it is centred in the UK. You don’t really get that in the international papers in the same way. England’s obsession with the royal family and their ownership of it… desperate to make sure that no wrong is said about it,” she ponders. “But there’s been a lot of scandal within the royal family, and if you’re doing a drama about the royal family, it would be irresponsible to not include some of those. Also, it makes a good drama.”

Anderson’s performance in The Crown won her an Emmy for Outstanding Supporting Actress in a Drama Series at the 2021 ceremony. It was a full-circle moment, as she had last won an Emmy in 1997 for Outstanding Lead Actress in a Drama Series for The X Files. The 24-year gap between wins meant that Anderson had an entirely different, better informed, perspective when accepting her second award. “Back then, I remember the photographers saying, ‘Gillian, smile, what’s wrong?’ And I was so… I didn’t even know where to put it, it was almost too much. I had no frame of reference,” she shares. “I didn’t even know how to be excited about it. I was [excited] of course. I was flattered, moved, everything. It was an honour. I just didn’t know how to process it. That’s what was being read on my face.” Anderson laughs recalling the memory of the night, admitting she’s often wondered what was going on “psychologically” at the time.

It was an entirely different affair when the actor accepted the coveted award in 2021, as she now knows just how important it is to soak in such moments. “To experience that it’s not a given, that it’s a rare thing to experience… it takes a lot of f*cking hard work and there’s something precious about it,” she tells me. “Being old and mature enough to have enough years passed to be able to have perspective. Before I had no perspective. I didn’t know what my perspective was, and suddenly I did. It was a perspective of gratitude.”