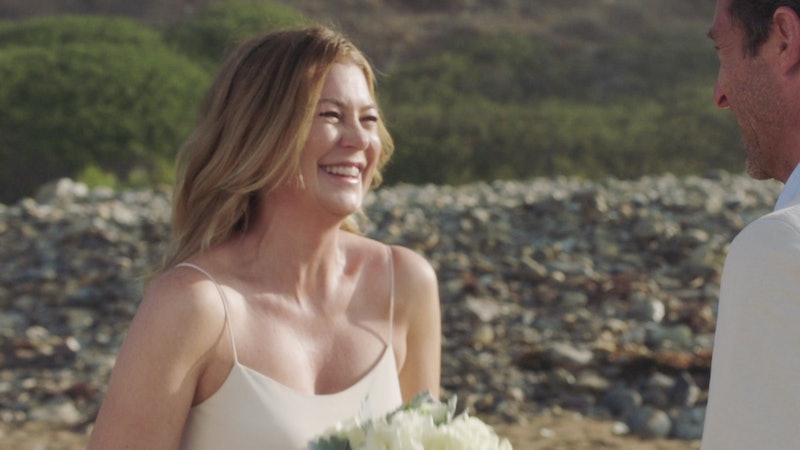 Spoilers ahead for Grey's Anatomy Season 17, Episode 16. As fans saw in the Grey’s Anatomy Season 17 finale promo that aired at the end of the May 27 episode, Meredith is heading back to Grey Sloan — and the beach?! The good news is that Dr. Grey is returning to the hospital with a new job, rather than some sort of relapse. As for the beach scene shown in the sneak peak, however, Twitter has questions.

At the start of the seconds-long preview (set to the tune of Ingrid Michaelson and Zayn’s “To Begin Again”) flower petals are shown falling on the sand as Meredith stares pensively into the distance. “I’m glad you didn’t die, Grey,” Hayes tells a smiling Mer — finally clad in her white coat, once again — in another scene, as the hospital staff cheers her return as the head of the residency program. “Me too,” she replies. And those are all the clues viewers had to go on before crafting their own theories, while naturally developing plenty of anxiety as well. As some implored the show to warn them if they’ll need tissues, others came up with scenarios that could even include a bonus Derek appearance.

Although nobody could really guess what the scene means at this point, it will more than likely be a sort of happy retrospective to wrap the season that ushered in so many epic comebacks from past characters. After Derek shocked viewers with his return in the season premiere, subsequent episodes gifted longtime viewers with reunions between Meredith and George, as well as Lexie and Mark. In the end, the beach was a source of peace and light, against the bleak backdrop of COVID. Whether or not Meredith will be able to return there at will moving forward, or if this is a sort of farewell as she begins a new chapter remains to be seen, however.

In the meantime, fans are relishing in the fact that Meredith is back on her feet. She kicked off the May 27 episode — aptly titled “I’m Still Standing” — by playing a backyard game of baseball with lookalike daughter Ellis, something that even reminded some fans of Derek. One Twitter user even took the opportunity to thank Meredith and Derek’s daughter for the drawing that precipitated their long-awaited beach wedding.

Of course it’s difficult to ignore yet another heartbreak for poor Jo, whose application to adopt baby Luna was denied. All in all, however, it seems brighter days are ahead on Grey’s. Despite their grandmother and father’s objection teased in the finale preview, Maggie and Winston’s wedding day will hopefully be the icing on the cake. After all, as actor Anthony Hill, who plays Winston, previously explained to Bustle, the couple has “been playing the role of joy, love, and a bit of escapism from the harsh realities of the pandemic.”

And it seems everyone is more than ready for the light at the end of that tunnel.