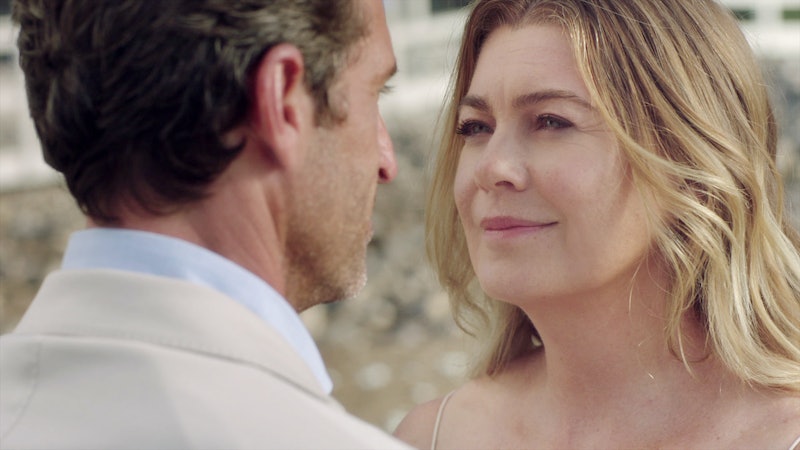 Grey’s Anatomy finales are always packed with twists, turns, and cliffhangers, and the upcoming Season 17 finale is sure to follow suit. In fact, ABC has already dropped a few vague hints. “It’s wedding day for Maggie and Winston. Meanwhile, Meredith takes on a new role at the hospital, and Jo makes a life-changing decision,” the episode description for the June 3 finale reads.

Those two short sentences leave plenty to unpack. The fact that Maggie and Winston are engaged is no secret, but the quick, surprise wedding is another story. Grey’s has already featured multiple season finale nuptials (Alex and Jo, Amelia and Owen, April and Matthew), all of which were riddled with various catastrophes. It also doesn’t bode well that none of the aforementioned couples are still together, but hopefully Maggie and Winston will be the one to break the curse.

Showrunner Krista Vernoff also seemed to hint at a happy ending following an emotionally heavy season. “Just watched a cut of the season finale of #GreysAnatomy,” she tweeted on May 19 along with a flying hearts GIF. “It. Is. Everything.” Even the episode’s title, “Someone Saved My Life,” sounds hopeful, though it’s worth noting that the Elton John song of the same name has a darker backstory.

What’s to come is anyone’s guess, but here are the leading theories so far.

Meredith Will Retire From Surgery

Ellen Pompeo is already confirmed to return for Season 18, so Meredith’s “new role” likely won’t be too major of a shift. Some viewers have pointed out that she’ll need time to recover from the physical effects of COVID, which has kept her unconscious for most of the season, so a step back from her surgical role — whether permanent or temporary — could be less of a choice than a necessity. Meanwhile, others have noted that it’s a Grey’s tradition for characters to make big life changes after experiencing traumas.

Tragedy also has a way of bringing people together, and the slow-building relationship between Meredith and Hayes, who already have the “MerHayes” ship name, may finally begin. After Hayes, aka McWidow, appeared on Meredith’s imaginary beach to implore her to fight for her life, Derek suggested she “should hear him out.” Hayes also drew a MerDer parallel by describing how much Meredith and Ellis look alike, something Derek had also told her earlier in the same episode. Considering Derek seemingly gave Meredith his blessing, along with the fact that Cristina literally sent him as a “gift” to her, a romantic future seems likely. Several fans replied to Vernoff’s tweet that they’re rooting for the duo, with one commenting they’ve been “waiting for them to happen all season.”

There’s no denying that Jo has been through it the past few seasons. After learning she was the product of rape, her birth mother had no interest in developing a relationship with her, and her father is dead, she spent some time dealing with her depression in Grey Sloan’s psychiatric ward. Then, Alex ghosted her for Izzie, and now her friend with benefits, Jackson, is moving to Boston with April. Even so, with a new career as an OB/GYN on the horizon and her desire to become a mother, a baby seems to be the next logical step to finding happiness. The penultimate Season 17 episode description notes that “Hayes and Jo are met with Luna’s legal guardian,” but given her undeniable connection to the newborn, Jo might move to adopt her.

Jo Is Pregnant With Jackson’s Baby

One fan reacted to the finale episode’s description with a less likely theory, tweeting, “Uh…watch Jo be pregnant with Jackson’s kid.” Actor Camilla Luddington, who plays Jo, actually replied to the tweet, but she brushed off the idea. “I seriously love this fandom because the ep description comes out and there is no way in hell you guys aren’t gonna try and guess alllllll the possibilities,” she wrote.

Jo & Hayes Get Together

Though the Meredith and Hayes coupling seems much more probable, not everyone thinks Dr. Grey is ready for a new relationship after DeLuca’s shocking death. “She’s been in a coma all season and her boyfriend was murdered, she needs to grieve,” one fan tweeted. “I can see Jo and Hayes becoming a thing maybe.” They will, after all, be working together closely once Jo officially switches her surgical specialty.

Amelia & Link Will Get Married

Sure, the Season 17 finale is billed as Maggie and Winston’s wedding, but Alex and Jo ended up sharing their big day with April and Matthew (and another random couple) in the Season 15 finale, so anything’s possible. After Vernoff teased the episode on Twitter, one fan guessed she was alluding to “Amelink’s wedding for sure.” They aren’t engaged — though Link did make multiple attempts this season — but Amelia does like spontaneity. Even if they don’t officially tie the knot, a proposal very well could be in the cards.

This one may just be wishful thinking, but fans have been clamoring for Callie and Arizona to make a Season 17 return after everyone from Derek and George to Lexie and Mark began appearing on Meredith’s beach. Even now, Vernoff’s Twitter mentions are full of requests to bring back “Calzona.” One person even mapped out the storyline, writing: “But what if the greys anatomy season finale ends with Calzona walking through the doors at Meredith’s house because covid is called down and they can have people over again and they say they’re coming back to work there.”

Whether any of these theories come to fruition, we’ll find out soon.