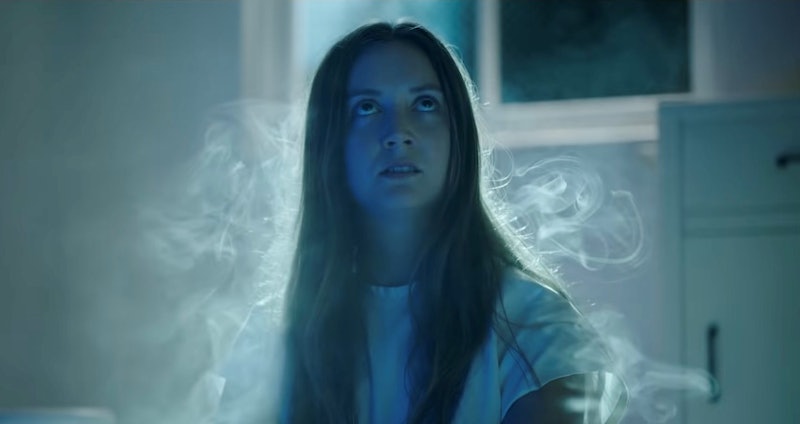 Much like its predecessor American Horror Story, each episode of American Horror Stories includes varying degrees of terror. The tone of the new anthology series is similar to the original show, featuring evil spirits, bloody murders, and twisted romances. There are also plenty of jump scares, as well as several familiar frights: the first two episodes are set in the Murder House from American Horror Story Season 1 (and a later Apocalypse episode).

Rather than the Harmon family, the premiere episode of American Horror Stories sees Michael (American Horror Story vet Matt Bomer), his husband Troy (Gavin Creel), and their daughter Scarlett (Sierra McKormick) move into the infamous home where so many American Horror Story characters met their demise. While unpacking her things, Scarlett finds and puts on the Rubber Man suit initially worn by Evan Peters’ character Tate. Without spoiling anything, terror ensues from there.

Kaia Gerber’s murderous ghost character Ruby also cryptically states in Episode 2 that there are “many wonderful ways to make people suffer,” and American Horror Stories will certainly try to examine as many of them as possible. The third episode, “Drive In,” will feature a screening of a “forbidden” film that has “disastrous consequences” appearing to involve damaged eyes. Meanwhile, Danny Trejo will play an ax-wielding Santa Claus in Episode 4, “The Naughty List,” which centers on a group of influencers who “face a reckoning after posting a problematic video online.”

Details about subsequent episodes are limited, but among the cast members confirmed to appear later on in the season are Dyllón Burnside as James, Nico Greetham as Zinn, Charles Melton as Wyatt, Kevin McHale as Barry, Rhenzy Feliz as Chad, Madison Bailey as Kelley, Kyle Red Silverstein as Quinn, Amy Grabow as Tipper Gore, and Virginia Gardner as Bernadette. Several American Horror Story alums will also be featured, including John Carol Lynch as Larry Bitterman, Naomi Grossman as Rabid Ruth, and Billie Lourd as Liv Whitley. “And this isn’t even the half of it,” Murphy wrote in a July 7 Instagram post.