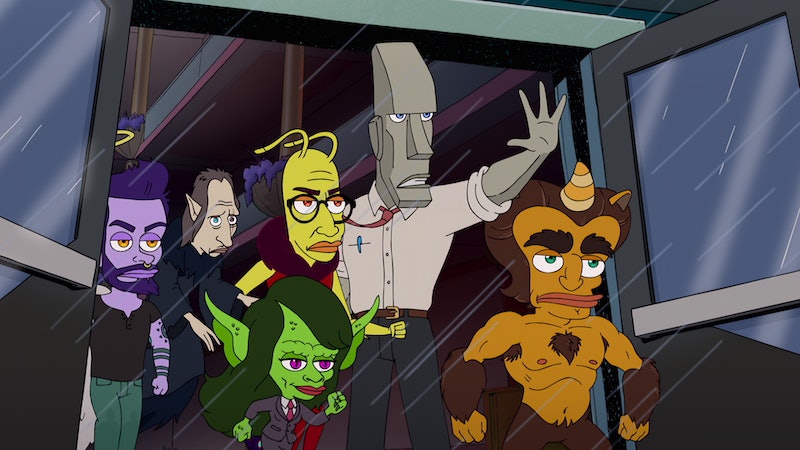 The world of Big Mouth just got bigger. Netflix’s new spinoff series, Human Resources, follows creatures from the original series like Hormone Monsters, Lovebugs, and Anxiety Mosquitos as well as new additions like an Ambition Gremlin, Logic Rock, and spider receptionist. It’s more of a workplace comedy than Big Mouth, showing viewers what the mythical beings are doing when they’re not off torturing the teens of Bridgeton middle school.

“We started with [the creatures] as representatives of [the Big Mouth teens’] emotions, like love and logic and ambition and shame,” Human Resources co-creator Kelly Galuska told Nerds & Beyond ahead of Season 1. “And then as we went, they became as human as our humans are. So while they’re able to be wacky in a very special, creature-y way, they also, I think, have these really emotional, very human experiences as well.”

Given that Human Resources only just premiered on March 18, Netflix has not yet made an announcement about whether or not the show will return for Season 2. But in the same interview, Galuska and fellow co-creator Andrew Goldberg were asked about stories they may want to explore in a potential second season. They didn’t confirm any plans, but suggested they had ideas percolating.

“One of the amazing things about Human Resources is that’s such a tough question because it can be anything. It’s like what about the human experience do you wanna learn more about and understand more about?” Goldberg said. “We kinda just scratched the surface a little bit on grief, and Henry Winkler [who voices the Grief Sweater] is such a delight that I’d be happy to bring Keith from Grief back anytime and learn even more about him.”

Galuska added: “I feel we were very led by our feelings [when we were writing Season 1] and the feelings based on what’s happening in the world and empathy and feeling sort of… hopeful for a better future, I suppose, is something I would love to explore in this time that is very difficult.”

If Human Resources is anywhere as close to successful as Big Mouth, there’s no reason to believe it won’t be back. The critically acclaimed series has aired for five seasons with a sixth on the way, and Netflix renewed Big Mouth for two more seasons in 2019 — before its fifth season even premiered. So the streaming service clearly has faith in the creative team.

As we await confirmation, here’s everything to know about a potential Season 2.

If Human Resources is renewed, viewers can likely expect a premiere date in 2023, as Big Mouth has reliably aired a new season every year even amid the pandemic.

Mainstays like Connie (Maya Rudolph), Maury (Nick Kroll), and Lovebugs Rochelle (Keke Palmer), Sonya (Pamela Adlon), and Walter (Brandon Kyle Goodman) will all assumedly be back. Newer characters like Emmy (Aidy Bryant) and Pete the Logic Rock (Randall Park), who had central roles in Season 1, can also be expected to return. There will likely be other additions too, as Big Mouth regularly introduces new roles and guest stars — usually voiced by a stellar celebrity voice cast.

This post will be updated as more information about Human Resources Season 2 becomes available.

More like this
Everything To Know About 'Cobra Kai' Season 6
By Brad Witter
'The Crown' Season 6 Has Suspended Filming "Out Of Respect" For The Queen's Death
By Bustle Staff
Everything To Know About 'Selling The OC' Season 2
By Brad Witter
All The ’70s Easter Eggs You Missed In 'That ’90s Show'
By Grace Wehniainen
Get Even More From Bustle — Sign Up For The Newsletter
From hair trends to relationship advice, our daily newsletter has everything you need to sound like a person who’s on TikTok, even if you aren’t.