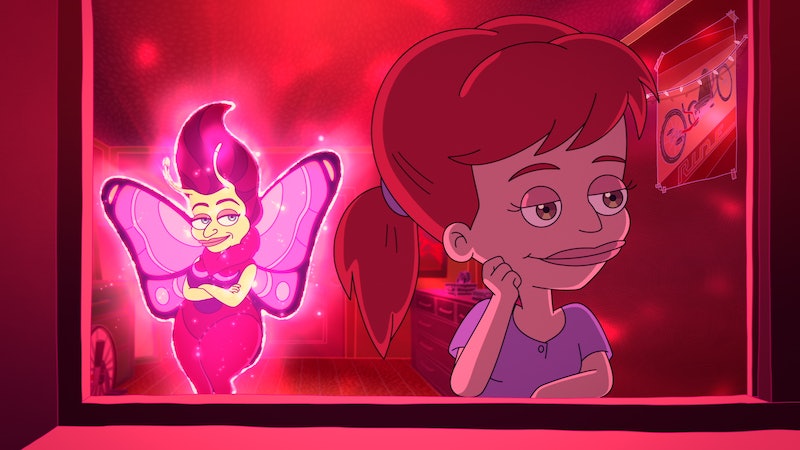 The lovebugs are a new addition to the Big Mouth universe and are introduced as a tie-in to the upcoming Big Mouth spinoff Human Resources. They initially appear as happy butterflies, but transform into caterpillar-like Hate Worms when the teens’ emotions become negative. Sonya, a luminescent fuchsia butterfly, appears to Jessi (Jessi Kelin) as she navigates her developing feelings for Ali.

Viewers will likely recognize Adlon’s distinctive voice, as she’s been voice acting for over two decades. She first voiced Pajama Sam in the popular ‘90s children’s video game of the same name, and has since lent her vocal talents to shows including Bob’s Burgers, Archer, Tuca & Bertie, and Rick and Morty. Her role as Bobby Hill on Fox’s long-running adult cartoon King Of The Hill won her an Emmy for Outstanding Voiceover Performance in 2002.

Throughout her career, Adlon has also appeared in multiple live-action roles, most notably as Marcy Runkle on Californication and Pamela on Louis CK’s FX dramedy Louie, for which she also served as a writer and producer. In 2016, she created and began starring in the FX comedy Better Things, which is loosely based on her life. She’s been nominated for an Emmy twice for her performance on the series, which is set to air its fifth and final season in 2022. In July 2020, Adlon signed an overall deal with FX and is currently developing new scripted and unscripted programming for the network.

It’s a long way from where Adlon was in her late 20s, when she remembers struggling after finding success as a child actor. “I didn't have goals. I didn't want to be famous. I just wanted to work,” Adlon told Bustle of her younger self in March 2020. “I'd never imagined a world in which I ever had kids, let alone got married. None of that.”

Now, she has three children with her ex-husband Felix O. Adlon — including Gideon, 24, and Odessa, 21, who are both actors. “Every day I'm pinching myself, because I didn't really have a lot of confidence at 28,” Adlon continued. “I have way more confidence now in who I am and what I'm doing. I don't feel bad about stuff anymore.”