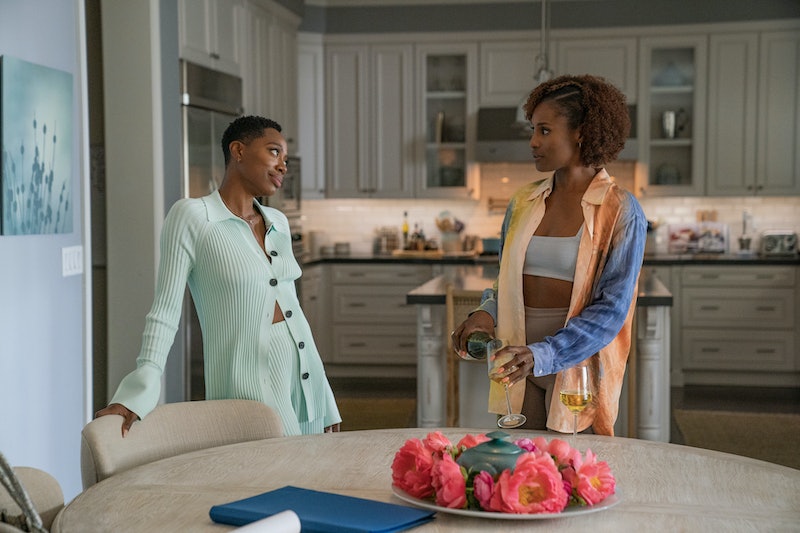 Spoilers ahead for the Insecure Season 5/series finale, “Everything Gonna Be, Okay?!” Early in the Insecure series finale, Issa tells her reflection, “I just want to fast-forward to the part of my life where everything’s OK.” To get to that point, the HBO dramedy’s final episode used a series of time jumps, focusing almost exclusively on Issa, Molly, Kelli, Tiffany, and Lawrence’s future birthdays, leaving viewers to fill in the blanks in between celebrations. (The four women made a pact at Tiffany’s going-away party in Insecure’s penultimate episode to get together for each other’s birthdays, no matter how busy their lives get.)

But first, the series had to resolve the previous episode’s cliffhanger when Lawrence’s fight for Issa led to a more literal fight with Nathan. The finale picked up with Issa and Nathan’s car ride home, and here’s everything that happened, including how Insecure ended its five-season run.

Issa And Nathan Break Up

Viewers didn’t have to wait long to find out the fate of Issa and Nathan’s relationship. Issa asked Nathan to come inside her apartment to talk about what had just happened at the party — but her barber boyfriend signaled he had nothing to say... until he did. “I was wrong. This ain’t good for me,” Nathan told her, explaining how “embarrassing” the night had been. “I’ve been, you know, ignoring this feeling that I’ve had all along, but... I got to take a step back. This messy sh*t is just toxic to me, and I’m good.”

Issa paused, nodded, and said, “OK,” before getting out of his car and walking inside her apartment. Even when she turned to take one more look at Nathan, there were no tears, seeming to indicate she really was OK — but she wasn’t. The breakup was painful, but she got through it, as fans saw when time skipped ahead to Issa’s surprise birthday party.

She hadn’t seen the last of Nathan, though. The Houston transplant showed up at said surprise party, though not to try and get Issa back. Suggesting they hadn’t spoken since that night in the car, Nathan said he’d gotten her messages, but stopped short of explaining why he hadn’t responded. He did admit that he was “just hurt” and said things out of anger, but he’d been good since then, and Los Angeles was finally “starting to feel like home.”

Genuinely happy for him, Issa responded, “I always thought that people come into your life for a reason, and you have made up so many good reasons for me. And I hope that I did the same for you ’cause I don’t want... I don’t want you to regret anything.”

He didn’t. So the pair embraced, exchanged pleasantries, and that was a wrap for Nathan.

Kelli Is Pregnant And In Love

After earlier introducing her new man, Desmond, at Molly’s birthday party, Kelli’s subsequent bash included a major announcement. “You all are some of the most important people in my life, but we are going to have another very important person in our lives... and just so y’all know, I would not, under any circumstances, do this with anybody else,” she announced to her friends at dinner, before cradling her growing belly.

Kelli later explained to Issa that, though she didn’t want kids before she “died,” she’d come to the realization she didn’t want to have just any man’s kids, she wanted to have Desmond’s kids. He’d inspired Kelli to do things she never thought she’d do — “including butt stuff” — and they seemed to be truly in love. Professionally, Kelli even got hired at Molly’s law firm, where her friend had convinced the partners to create an estate-planning division.

Issa And Lawrence Get Back Together

At Tiffany’s birthday celebration in Denver, Molly revealed that Issa had never responded to Lawrence’s profession of love. “You know what I’ve always wondered? What would you have said to Lawrence if Nathan hadn’t interrupted?” Molly asked her best friend after spotting her staring longingly at a photo of her ex.

Molly assured her that it wasn’t too late if it’s what she really wants, so, on Lawrence’s birthday, Issa took a chance and asked if she could take him to dinner because she’d been “thinking a lot” about him. Alas, Lawrence already had plans with a new girlfriend, though he didn’t share that information with Issa.

So Issa moved on with a new man named Nasir, who was also her date to Kelli’s earlier birthday dinner. While getting ready to go to bed with Nasir, Issa saw Lawrence was calling her and debated whether or not she should answer. “B*tch, don’t you f*cking dare,” mirror Issa told real Issa, adding that it’s “never going to work” and she needed to finally move on from Lawrence. “How do you know that?” Issa asked her imaginary self.

Not all hope was lost, though. Later, Issa invited Lawrence to see the new office space she’d purchased for her thriving business. While giving him a dimly lit tour of The Blocc’s empty building, Issa said, “I keep thinking about all it took to get here, you know? Doubting myself, going back and forth about what I wanted, being scared to waste my time, look stupid in case none of it worked out, and then I realized that it was all in my head. No one was doubting me except for me... and Kelli, and sometimes Amal, too. But I had to believe that it would work out for it to work.”

After Lawrence replied, “So do you believe it’ll work out?” Issa paused before responding, “I’m OK with finding out.” Cue a passionate kiss, followed, of course, by a classic awkward moment when Issa accidentally knocked a coffee mug to the floor.

The next scene fast-forwards to one year later, and Issa and Lawrence are still together at — surprise — Molly and Taurean’s wedding. Molly had struggled to process her mom’s unexpected death, which was revealed earlier in the episode, but was finally “really, really, really happy” with her life. While bridesmaid Issa helped Molly out of her wedding dress in a bathroom, Molly tearfully thanked her friend for her part in helping her get there.

“Thank you so much for everything, Issa ... just for being you, for loving me while I was me, and, um, girl, I don’t know where life is going to take us, but I just know as long as you’re around, I’m going to be OK.” Through her own tears, Issa replied, “Yeah, me too,” and the women hugged and said, “I love you.” (Fun fact: Yvonne Orji, who plays Molly, told Bustle that the Issa reaction shots fans saw were actually filmed while she gave a personal speech to Issa Rae, rather than what was written in the script.)

The episode’s final scenes take place on Issa’s next birthday, showing her thriving in every sense of the word. After leaving The Blocc’s fully staffed, fully operational office, Issa got in her car and took a trip down memory lane, driving past The Dunes apartment complex (“Thug Yoda” was even outside), the We Got Y’all office, and finally a Lawrence lookalike wearing a blue Best Buy polo.

Issa arrived home to Lawrence and his and Condola’s son, Elijah, now a toddler. The last person Issa talks to (via FaceTime) is Molly, who was vacationing with Taurean in Greece — and even made a throwback “Broken P*ssy” reference. It was a fitting end because, after all, Issa and Molly were always Insecure’s true love story.