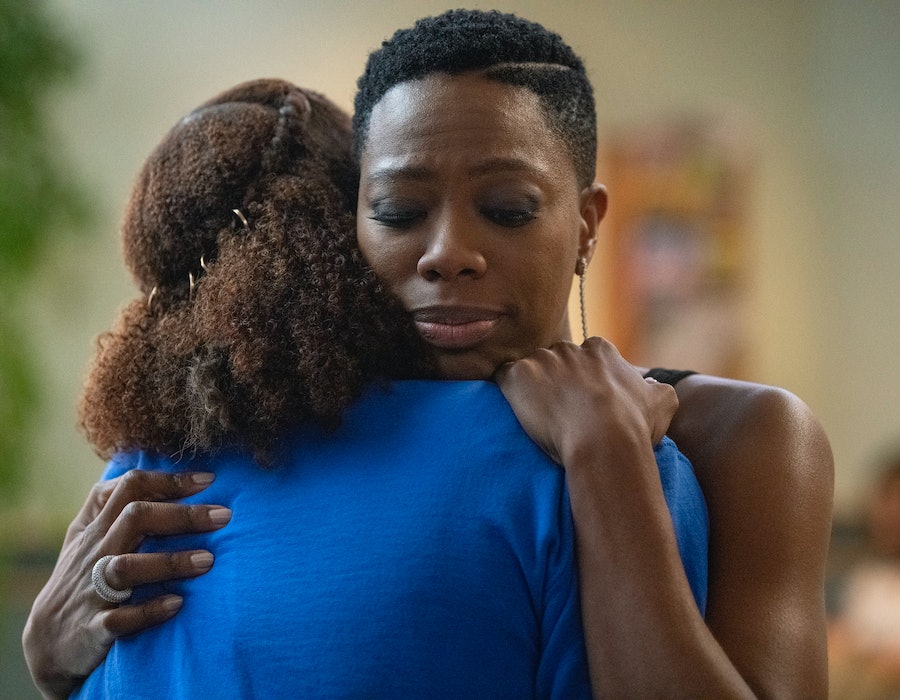 Molly Carter is indisputably that friend. When Issa texted her earlier in Insecure Season 5 stressing about Nathan and Resha flirting, she immediately turned to Resha and cut to the chase. “Hey Resha, quick question: You f*ckin’ Nathan?”

According to actor Yvonne Orji, that bluntness has always been a key part of Molly’s personality. “She’s been very consistent in her character in that way. I think that’s what Issa loves about her,” the 38-year-old tells Bustle.

Still, Molly has evolved over the course of Insecure’s five seasons by learning to loosen her grip on her Type-A approach to work and dating. “Molly is coming into her femininity in a way, and coming into just relaxing,” Orji says. “Even if you feel like you have everything all together, it’s like Whack-A-Mole. So I think she’s learning to release control, and I think this season things will happen in her life that shake her to realize she doesn’t have control over a lot of things.”

As Insecure closes in on its series finale, Orji says she’ll miss Molly’s sarcastic wit, iconic facial expressions, and “I don’t give an F” attitude. Yet it’s Molly’s ability to bring humor to situations while being a “boss chick” who can handle her business that Orji, a Nigerian-born comedian, connects to the most. “The things I’ve probably been most proud of in my life have been when I had that kind of Molly-esque drive and focus,” Orji says.

Below, Orji reflects on Molly and Issa’s tumultuous friendship, filming their emotional last scene, and saying goodbye to the role that landed her a 2020 Emmy nomination.

Molly and Issa’s friendship is the crux of Insecure, but they spent most of Season 4 either apart or fighting. What did it mean to you to get to see them reunite before the end of the series?

Season 4 was very hard because we were in different worlds, and when we came together we were not on the same page or we were arguing. If you go through a friendship breakup in your real life, the energy that it takes to be mad or stay mad or try to figure out who’s right or who’s wrong, that’s just so exhausting. So this season is a breath of fresh air because you had two people who love each other, and they were just not understanding each other or growing at the same pace at the same time. Now, you’re really going to see the importance of friendship — and not just when things are going well. When things aren’t all the way copacetic, you need that person that you can say, “Hey, listen, I need you right now.” And they’re like, “Say less.”

A recent episode opened with Issa and Molly lying face-to-face in bed, and then ended with Issa and Nathan in the same position. What did that juxtaposition symbolize to you?

From the start, we’ve known that Issa and Molly’s friendship is the relationship of the show. You think it’s all the love relationships — and those are fun to have, all the men that come in and out of their lives — but what has been consistent is that they are the central relationship that we’re following. And I think that juxtaposition is exactly that. You see them like, “Hey, girl, I got you, I’m glad we’re back and we’re in this position.” And then you see Issa with a love interest that some viewers like, some viewers don’t, but Molly and Issa, most all of the viewers love. I don’t know if there were any viewers who are like uh-uh, they don’t deserve to be friends, I don’t like them for each other. I haven’t seen that tweet, but you have seen that at some point with basically all of our romantic partners.

Molly has this unexpected new romance with Taurean. Do you think he’s the right person for her?

I also had questions for both Issa and [showrunner Prentice Penny] about the Taurean choice. Because they were arch nemeses for so long, I was like, how does that work? Prentice explained that sometimes the people that are right under your nose that you don’t see as a viable option end up being the option. He was like, “Let’s just look at Taurean’s stats: He’s a partner [at a law firm], he’s a successful Black man, he is single, he is caring, he’s all the things on paper that Molly actually wanted.” And now that they are kind of in a new space and looking at each other differently, she sees the softer side of him. I think sometimes you don’t get to see the full version of someone that you’ve already kind of written off in your mind, but when you lift the veil and you see them 360, you’re just kind of like, “Oh, wait a minute, could I love this man?”

In Episode 8, Molly cancels her first date with Taurean, who then sends wings and wine to her apartment as a surprise because he knows she had a hard day. Did that make her see him differently?

He knew the way to Molly’s lemon pepper fried heart! Acts of service is my love language, so when Issa and Prentice broached the subject of Taurean, I was like, “Molly is going through a lot in her personal life and will be pushing him away and canceling dates, so if it is going to be Taurean, he has to do something that wakes her up to be like, ‘Oh, oh, this guy.’” If I’m home alone and I’m mad, I want somebody to send me something without me asking for it. Because otherwise it feels like I’m asking for you to care, as opposed to you just genuinely caring because you’re a caring individual. I think that scene is where you see Molly changing, like, “Oh, let me give this guy a chance.”

What insight did Issa and Prentice give you on Molly’s life after Insecure, and how does it compare to your own vision for her?

Issa did a phenomenal job with the finale. I don’t know how much more the viewers could want after they see the episode. If you want more, y’all are askin’ for a lot. As somebody who’s been with this character from the start, it was a beautiful bow. They did a really good job of setting up where these characters are going even though we won’t get to see it.

What was the mood like on set the final week of filming?

That last week was really emotional. It’s kind of like graduation: You still have exams to take, but you’re like, oh man, this is the last time we’re gonna be on the quad, this is the last time we’re gonna be in this apartment. Every night was like a walk down memory lane. There were tears, we got cake for everybody, we got champagne, and then we’d go back to a trailer and reminisce about some aspect of the show that involved the person whose character we were wrapping on.

What were you thinking and feeling during your final day on set?

Oh my god, I don’t know if I’m going to be able to talk about this. I remember walking from my trailer to set with this deep feeling of, “This is the last scene.” Molly and Issa have this really tender, beautiful moment together, and tears were just inevitably written in. The cameras were on me first, and I was just trying to get it out. Molly was thanking Issa for being a good friend, for being there, and Prentice came to me — without letting Issa know what he was doing — and said, “I want Yvonne to thank Issa for how she changed your life and for what this show meant. Forget the words. I want you to thank her from your heart.” I was like, “Oh my god, are you serious?”

How did Issa react?

I was thanking her for really personal, emotional things, and as it dawned on her what was happening, she started losing it. She had to still be in acting mode, but I was giving her her flowers in real-time, and the cameras were catching her reaction. So that was emotional. I’m sure somebody has the footage of me saying not the lines, but my heart, to Issa.

What legacy do you hope Insecure will leave behind?

I hope that we can be what A Different World is for me and my friends. It’s a cult classic. I hope that’s our legacy. I hope that parents show their kids Insecure years from now. I would love when people talk about our show to be like, “It helps me see what’s possible for me on television and it helps me see myself.”

More like this
At 28, Rosie Perez Risked Her Career To Stop Playing Stereotypes
By Gabrielle Bondi
At 28, Debra Jo Rupp Was Living A Much Different '70s Show
By Grace Wehniainen
Zach Reveals The Chaotic 30 Minutes That Were Cut From ‘The Bachelor’ Premiere
By Grace Wehniainen
'That '90s Show' Star Callie Haverda Got Advice From Mila Kunis & Ashton Kutcher
By Brad Witter
Get Even More From Bustle — Sign Up For The Newsletter
From hair trends to relationship advice, our daily newsletter has everything you need to sound like a person who’s on TikTok, even if you aren’t.