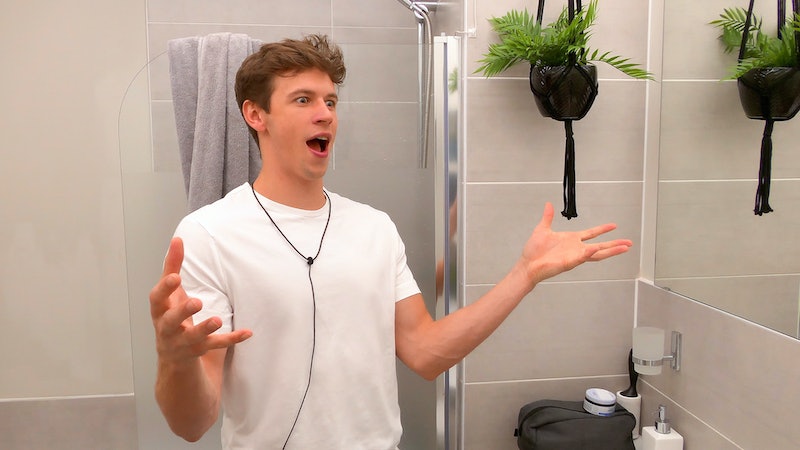 Bru, Yu Ling, and Alyssa may have had a running joke that they had a strong “throuple” alliance in The Circle, but it all fell apart on Episode 9. As a result of several players trying to vote out Carol (aka John), Alyssa got caught in the middle, and she ended up getting blocked by Bru, the very player who dubbed her his “Circle bae.” So was their relationship a genuine romantic spark dampened by gameplay, or just a showmance?

It all came as a result of a new Circle twist: a cyber virus that created “a data breach” that leaked the photo albums of one player to another player. Each of them had to upload one of the photos and anonymously ask that person a question. Nathan (aka Alex) decided to “throw Alyssa under the bus” and purposely made up a fake conversation to see how she would react. She handled it as well as she could, and while the implication that she was a liar didn’t seem to faze the older players, it might have influenced new players Imani (aka Trevor) and Eversen. When they were given the power to save one of the players, they chose Frank. Frank then had to choose who to save, and so on. The next saved contestants were Yu Ling, Rachel, Nathan, and Bru, who then had decide the last person to save between Carol or Alyssa.

“I have to choose between my Circle mom or my Circle bae,” Bru said, dubbing the situation an “absolute nightmare.” After deliberating, he blocked Alyssa.

“I’m so sad because my alliance f*cked me over,” Alyssa said, wiping away tears. Hurt about the turn of events, Alyssa decided she had to go talk to Bru about what happened after being blocked. “Oh no, Alyssa no,” he said as she ran in. “If I hug you, you might slap me.” But they laughed it off together, and she said she had “no hard feelings” because she would’ve struggled between choosing Bru or Carol too. He said he was thrown off by Yu Ling not choosing her, but admitted he trusts Carol the most; he said he knows she’s likely a catfish, but he doesn’t care as long as their alliance is strong. Alyssa similarly said she would’ve chosen Carol too, as she’s “shown you loyalty” several times.

Still, Alyssa admitted she did cry when Bru blocked her, and he joked he “[wasn’t] gonna sleep tonight” because he was “guilt-stricken.”

Then, things got a little flirty. They noticed they were wearing matching shoes and complementary pink outfits. “We’re Circle soulmates,” he joked, adding that he dressed up just for her. She said he was sweet, dubbing him a “ray of sunshine.” She then joked that at the end of the game, “We could still open-mouth kiss.” He agreed, but added that he didn’t think Yu Ling should be included in their make-out session anymore. She blew him a goodbye kiss and left. Bru, meanwhile, rolled onto the ground, proclaiming “she was the best” and “so cool.”

Though it was a cute moment, but it’s pretty unlikely Bru and Alyssa are ever going to follow through with that smooch. Though Bru wrote single on his profile — and definitely played up flirty vibes with both Yu Ling and Alyssa — according to his social media accounts he was already taken when Season 4 began filming (likely around September and October 2021).

Bru is dating content creator Anna Sitar, who began commenting on his TikToks in March 2021. “Proud of you let’s go!” Anna wrote on March 24 post in which Bru announced his new job based in Los Angeles, where Anna lives. (Bru was formerly based in Detroit.) Per an April 2022 TikTok, Anna said that they officially met through friends in April 2021. In another TikTok, she said they didn’t hang out in real life for another four months, but eventually reconnected. They officially announced their relationship in November, likely after Bru was back from filming The Circle. On a Nov. 11 TikTok, he showed them attending a Detroit Pistons game together, while she similarly posted a video teasing her new boyfriend and all of the content they had already filmed together. Since then, they’ve posted plenty of their adventures together, from Bru attending Anna’s graduation to them planning cute “hometown” dates.

So suffice it to say, what happens (or rather, what’s said) on The Circle really does tend to stay in The Circle. Clearly Bru’s relationship with Alyssa and Yu Ling was purely strategic.

More like this
Tyler Barriss From ‘Web Of Make Believe’ Remains In Prison For Swatting
By Kadin Burnett
Here’s Everything Coming To & Leaving Netflix In July
By Grace Wehniainen
Move Over, 'Sunset'! The Drama-Filled Trailer For 'Selling The OC' Is Here
By Nola Ojomu
What’s New On Netflix: The Return Of 'The Umbrella Academy'
By Arya Roshanian
Get Even More From Bustle — Sign Up For The Newsletter