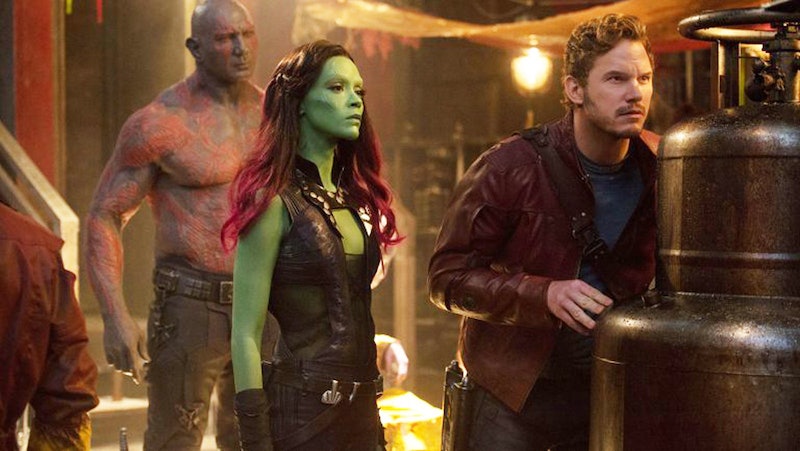 Star-Lord may be getting some competition when it comes to guarding the galaxy against otherworldly threats. About a year after the United States government announced plans for a space-based branch of the military, Guardians of the Galaxy director James Gunn reacted to Space Force members' new "guardians" title with a series of posts on Twitter, including one calling Vice President Mike Pence a "dork."

On Dec. 18, the U.S. Space Force Twitter account revealed that "after a yearlong process that produced hundreds of submissions and research involving space professionals and members of the general public," officials have decided that officers will be known as "guardians." While many social media users and Marvel fans were instantly reminded of the Guardians of the Galaxy franchise, Space Force officials explained on Twitter that the title — which was chosen "by Space professionals for Space Professionals" — was selected as a nod to the Air Force. "The name Guardians connects our proud heritage and culture to the important mission we execute 24/7, protecting the people and interest of the U.S. and its allies," the U.S. Space Force tweeted.

However, Gunn — who wrote and directed the first two Guardians of the Galaxy movies — wasn't buying it, and responded to the official announcement with an eye-rolling GIF. "Can we sue this dork?" the director wrote on Twitter in response to a press release about Vice President Mike Pence confirming the new name. "Maybe I can make them all sleep?" Pom Klementeiff, who played the empath Mantis in the Marvel films, suggested, leading Gunn to joke, "Maybe for like a year or something please. Thx." The films' official Twitter account also had a quip at the ready after the announcement was made: "Who, us?" they wrote, along with a spaceship emoji.

In addition to directing the star-studded Suicide Squad reboot, Gunn is also set to return as writer and director for Guardians of the Galaxy Vol. 3 after being fired and then rehired by Disney in 2019. While details about what fans can expect from that film are scarce, the director revealed during a 2017 Variety interview that it would be the final installment in the current series. "I think that the third movie is going to continue this trilogy, the story of this iteration of the Guardians of the Galaxy," he said at the time. "It’s going to do it in a big way, and we’re going to come to an epic conclusion of who the Guardians are and why they were brought together, and I can’t wait to tell that story to the people. ... It will be the final, in this iteration of the Guardians of the Galaxy."

A year later, star Chris Pratt teased that Guardians of the Galaxy 3 might be a prequel, when he told reporters that the events of the film "might take place in the past." The film was originally slated for a 2020 release, but the release date was postponed in 2019. Due to Gunn's brief departure from the series, the ongoing coronavirus pandemic, and the death of Black Panther star Chadwick Boseman in August, it's likely that the film will undergo a few changes from its original plan.

"I believe it's okay to say that we will go into production late next year," Dave Bautista, who plays Drax, told Entertainment Weekly in a December 2020 interview. "I saw a script early on when we were all on schedule and James Gunn was attached before everything went nutso. I believe because [Marvel's] whole calendar has changed [due to the pandemic shutdown and Guardians' production delays], that storylines have changed, and they won't intersect like originally planned. ... I haven't seen a new script, is the short answer."

It's unclear whether any U.S. Space Force Guardians will make an appearance in the new film.