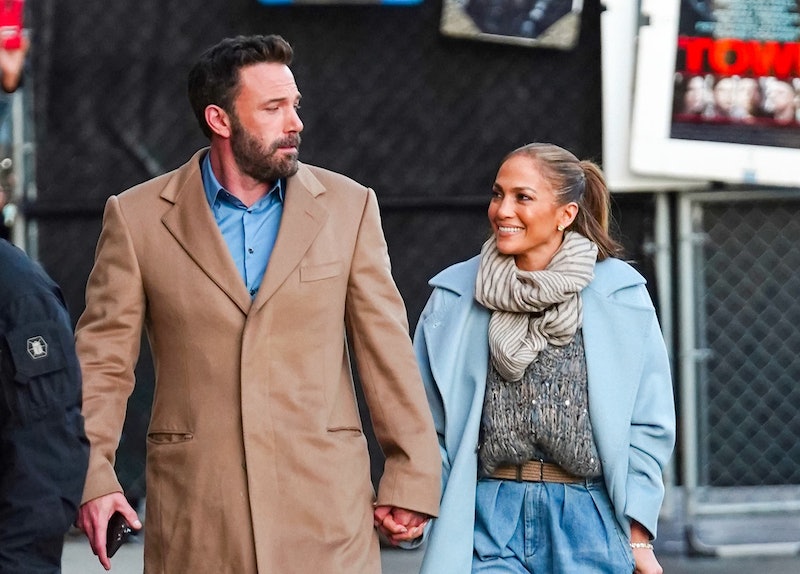 After initially keeping quiet about reuniting with Ben Affleck, Jennifer Lopez is getting loud about their love. On Feb. 1, Lopez opened up about rekindling her relationship with Affleck after nearly two decades, telling PEOPLE that she feels “so lucky and happy and proud to be with him.”

The couple famously known as “Bennifer” dated for two years and got engaged in 2003, but the intense media attention on their romance made them call off the wedding and go their separate ways. After she split from ex-fiancé Alex Rodriguez in March 2021 and he called it quits with Ana de Armas by throwing her cardboard cutout in the trash, the two were spotted together several times throughout the summer, and their reunion was finally confirmed when they walked the Venice Film Festival red carpet in September.

During the new interview, J.Lo admitted that they both “had a little bit of fear” about letting their relationship get “trampled” again once they reunited. “We both were like, ‘Wow, we’re so happy and we don’t want any of that to come into play again’,” she recalled. “We’re older now, we’re smarter, we have more experience, we’re at different places in our lives, we have kids now, and we have to be very conscious of those things. We’re so protective because it is such a beautiful time for all of us.”

Despite their public split, the two stayed on good terms before getting back together romantically. In February 2020, Affleck praised his girlfriend’s Golden Globe-nominated performance in her 2019 film Hustlers and agreed with public consensus that she was snubbed by the Oscars. “She should have been nominated,” he said. “How awesome is it that she had her biggest hit movie at 50? That’s f*cking baller.” As part of a celebrity interview with InStyle the following year, Affleck jokingly asked Lopez where she stored her fountain of youth. “Why do you look the same as you did in 2003 and it kind of looks like I’m in my 40s … at best?” he said, which she was flattered by. “Ben is funny,” she responded. “He still looks pretty good too.”

Now, the couple is celebrating the new chapter of their love story and are grateful for the changes they’ve made. “It’s beautiful the way it feels very different than it was years ago,” she said. “There’s more of an appreciation and a celebration for it, which is nice. When you find somebody and you really, really love them and you get a second chance at that? That is a really rare, precious, beautiful thing and we don’t take it for granted.”

More like this
Lady Gaga Will Star In 'Joker: Folie À Deux' With Joaquin Phoenix
By Jake Viswanath
Taylor Swift Calls Dwayne Johnson "The Man" After Revealing New "Taylor's Version" Song
By Jake Viswanath
Who Is Bad Bunny Dating? Gabriela Berlingeri's Vocals Are Featured On His Song "En Casita"
By Radhika Menon
Demi Lovato's New Song "29" Hints At Their Age Gap From Ex-Boyfriend Wilmer Valderrama
By Jake Viswanath
Get Even More From Bustle — Sign Up For The Newsletter