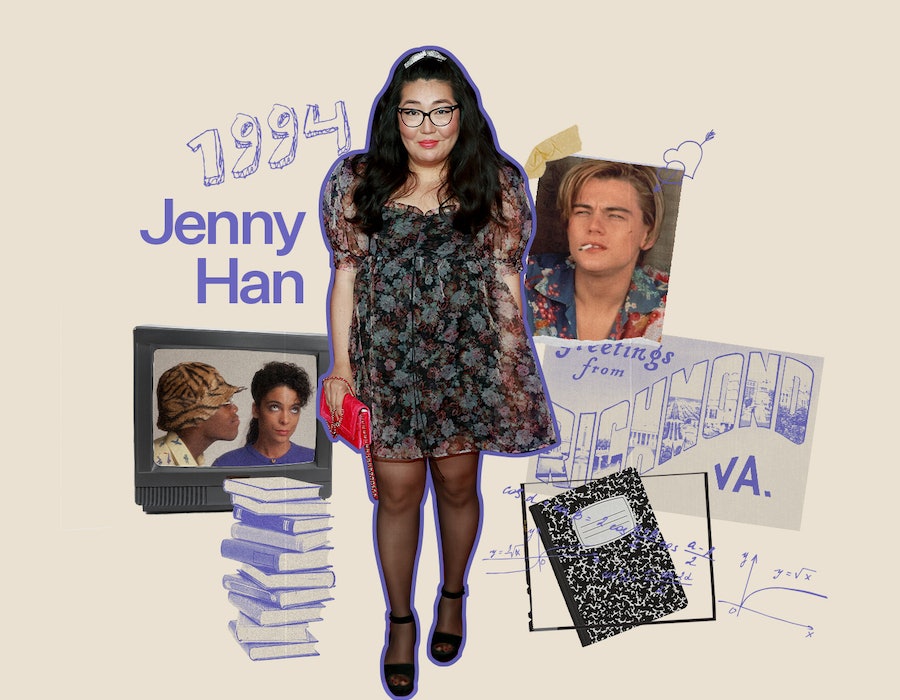 To a teenage Jenny Han, Leonardo DiCaprio was everything. “I was very obsessed,” the 41-year-old author says. She proudly holds two framed photos of the star as Romeo in his heartthrob-making role in Romeo + Juliet up to the Zoom screen. “This came out in the newspaper and I got this frame and spray painted it gold and I still have it,” Han says from her Brooklyn apartment. She even wrote him a letter: “I did not get a response.”

DiCaprio wasn’t the only crush a teenage Han would write to, however. She really did write letters to the boys she liked in high school and store them in a hatbox — a premise she fictionalized for her bestselling To All The Boys novel series, which was adapted by Netflix into a wildly successful film trilogy. Though a 14-year-old Han took her love life seriously — she had a designated crush per class at her magnet school in Richmond, Virginia — she also used her burgeoning interest in romance writing to give her friends the fanfic treatment. “I used to write stories about me and my friends on this old computer I had,” Han says. “My one friend had a crush on my cousin, so then I was like, ‘Let me do her that favor and write up a little story for them.’”

These days, Han’s writing gives a wider audience access to those same butterflies and giddy feelings via her novels and their adaptations. And there’s even more to come: Amazon Prime’s adaptation of her 2009 coming-of-age trilogy The Summer I Turned Pretty has already been greenlit for a second season that’s sure to bring more complications to the love triangle between 16-year-old Belly and brothers Conrad and Jeremiah. Below, Han discusses which brother her 14-year-old self would choose, struggling in math class, and her ill-advised makeup decisions.

I had just started high school. I had a rough middle school experience and then I applied to go to this magnet school in my town and had a really great experience. I loved my high school because it was actually just a bunch of nerds and there were people that I knew already. I went to this Korean church, so there were a bunch of kids from my church who went there and my best friend was going there. I would say I was feeling good in 1994.

Other than Leo, did you have any other celebrity crushes?

The other big celebrity crush at the time was Kadeem Hardison from A Different World. He played Dwayne Wayne. He’s my first crush.

Did you also write him a letter?

I did not. I was very attached to him and Whitley as a couple. They were like the power couple on the show.

What were your biggest hopes and worries at the time?

My biggest worry at the time was math. I was really bad at math and everyone else was ahead of me because it was a magnet program. So I was worried that I was gonna be really behind… because I was. It was a founded worry. It was a worry with merit. What was my hope? I was just really hoping I was gonna pass math.

Fourteen can be an awkward time for girls. Did you feel pretty at 14?

I did feel pretty. I felt really good going into freshman year. Around eighth grade to ninth grade I had a growth spurt and my hair was in a good place. For a long time in middle school it was hard to find any clothes that fit because the crotch would be too low or your body would just be in a moment where the limbs don’t quite match up… I think [at 14] I was understanding a little bit better how to dress myself.

Did you have a go-to look?

At the time, the blazer was a thing. You would do a blazer with a T-shirt and jeans. Or boxers were a thing, so you’d wear a T-shirt and boxers. And my favorite, and it continues to be my favorite, was a babydoll dress. That was definitely a look.

I did not understand how to do makeup. All I did was brown lipstick. It was a mocha lip and it was not… good. It was the time of the overplucked eyebrow and the brown lip.

Your main characters from Belly to Lara Jean had multiple romantic prospects. What were yours like at 14?

I remember the first day of school freshman year, I was just like, “You’re cute. You’re cute.” I had a whole list, it was great. You know how they say when you have a crush at work it helps your day? Something to pass the day along and mix it up a little and a reason to brush your hair.

So I had a crush in each class. We had block schedules, so it was eight classes. As the year went on I whittled down a bit. But freshman year I did have a lot of people I was looking at. It was a random mix. Some people I was friends with, some people I wasn’t.

Did any of those crushes progress into something more?

It was just a lot of flirtations. I’d be on the phone all day, literally day and night, and we only had one phone line so it made my sister crazy. And I remember my record was seven hours with one of my crushes. He called me in the morning and we were literally on the phone until five o’clock. And we would just talk and talk and talk.

At 14, who would you have dated among your To All The Boys characters?

At 14, I would’ve dated John Ambrose McClaren. Because I was in Model UN and that was sort of my vibe, a bit more studious, nerdy vibe.

How about among your The Summer I Turned Pretty boys?

Were you showing your writing to anybody at 14?

I was showing my friends those stories and I was in a creative writing class freshman year also, so at that time I was writing poems, plays, and short stories in that class.

I had so many notebooks of all my stories. I used to actually give my short stories to my friends as part of their Christmas gift, and it’s so funny because there’s one that I wrote about two best friends that are drifting apart and one of them gets pregnant in high school. I wrote that freshman year and my friend Sarah gave it to me when I published my first book. She sent it to me in the mail! One time she had forgotten to do an essay for a school short story. So then I wrote one for her. And she kept it because she got an A+ on it. That was in middle school.

One of the things I loved about The Summer I Turned Pretty is the close relationships the teens have with their moms. What was your relationship with your parents like at 14?

At 14, I would say our biggest issues were communication because my parents, English was their second language. And they’re from Korea so there’s a lot of cultural differences — I [couldn’t] go on a sleepover, I wasn’t going to parties freshman year. So they were strict on that stuff. That was a frustrating thing for me at that age, wanting to be able to do those other things my friends were doing but I couldn’t.

What were you getting in trouble for at 14?

I remember I got in trouble once where I was at the mall with a boy and they didn’t know where I was for hours because I didn’t have a cell phone. I thought I was getting a ride from somebody else but then [that] person didn’t show up and I didn’t want to leave because I was just hanging out with this boy and I didn’t call anybody to come get me. So I was just gone all day long and I was in really big trouble.

What were you reading at 14?

I was reading Danielle Steele, Stephen King. There wasn’t YA at the time. You kind of went from Baby-Sitter’s Club, Judy Blume, and then went straight to Stephen King because there wasn’t much in the middle.

What would your 14-year-old self think of you now?

I think my 14-year-old self would be pleased with my wardrobe because I can afford to buy cute things. And I think she would be excited about the fact that I’m writing for a living because at 14, I never thought that being a writer was an actual job I could have. It was as realistic as, “I’m gonna be a singer” or “I’m gonna be an astronaut.” It just didn’t seem within my grasp. So I think she’ll be really delighted.

What advice would you give her?

Algebra really isn’t gonna affect your life one way or another, so don’t be so stressed about it. Just do your best.

More like this
Former 'Bachelor' Producer Elan Gale Knows The Secret To Your Favorite Shows
By Samantha Rollins
'The Sandman’s Ending Is A Departure From Neil Gaiman’s Comic Book Series
By Kadin Burnett
At 14, Tatiana Maslany Was Obsessing Over Tamagotchis & The Spice Girls
By Gabrielle Bondi
At 14, D'Arcy Carden Was Sneaking Out To Parties & Crying Over Kurt Cobain
By Ivana Rihter
Get Even More From Bustle — Sign Up For The Newsletter