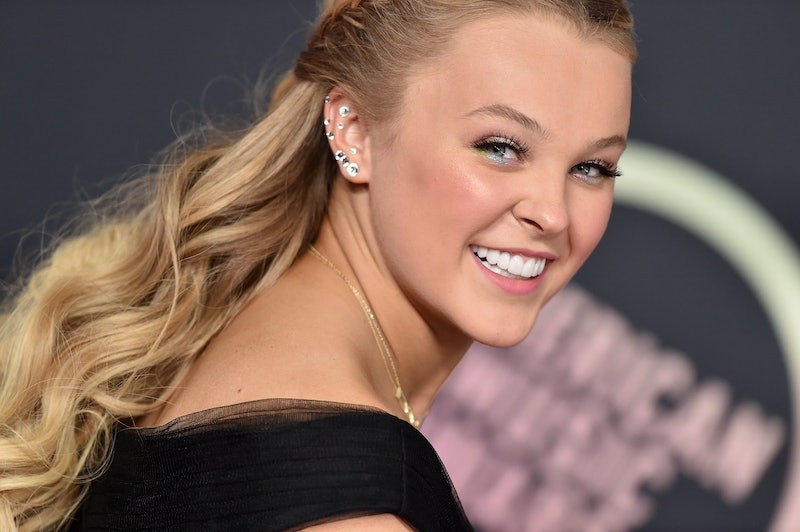 JoJo Siwa rose to fame dancing for Abby Lee Miller’s studio on Dance Moms. Now, the YouTube sensation and her mom(ager) Jessalynn are calling the shots on their own, with a new competition show Siwas Dance Pop Revolution. “I felt like now that JoJo is 18, it would be fun for us to do a project together, and I was like, ‘What’s better than having one pop star in my life?’” Jessalynn tells Bustle. “How about a whole group of pop stars?” On their series, the mother-daughter duo mentor 11 young performers and put them through dance and vocal challenges, with JoJo providing choreography. The winners will join girl group XOMG Pop and potentially go on tour with JoJo.

JoJo carries this Peacock series on her back, but the Nebraska native says it has nothing on Dancing With the Stars, where she just finished as runner-up on Nov. 22 and made history with partner Jenna Johnson as the show’s first ever same-sex pairing. “[DWTS] definitely is the most stressful show I’ve ever been on in the best way possible,” she says.

“Getting to create these stories as two females on the show [was] just so magical...”

“When the idea [for a same-sex dance partner] was first there, I was like, whoa, this is going to A, mean so much to me, but B, mean so much to the world, and I just know what it’s going to do for little kids,” JoJo recalls. “I know what it would’ve done for me as a little kid, and so seeing that I’m the one who gets to do it means the absolute world to me.”

Week after week, JoJo delivered routines that earned consistently high scores from the judges, including the season’s first perfect score. For one of her finale performances (below), JoJo honored the LGBTQ community with a powerful number set to Lady Gaga’s empowerment anthem “Born This Way.” The most poignant moment came when background dancers joined the routine then switched roles at the 1:33 mark, with men dancing with men and women dancing with women. It was a subtle yet triumphant move of long-overdue LGBTQ representation.

At first, JoJo was concerned if her DWTS partner would be comfortable with the idea. Now, they’ve become “best friends and sisters” who have bonded in the ballroom by crafting imaginative routines that explore narratives beyond the typical boy-girl romance. “Getting to create these stories as two females on the show [was] just so magical every week,” JoJo says. “Something that I really love is that we get the option to be a boy or be a girl.”

However, there would some physical challenges to wrestle with. “We have to get really creative because there’s a lot of things that men physically can do that an 18-year-old girl can’t do,” she remembers. “I can’t do all the lifts that they can, so anytime that we figure out a good lift that I can do, we work harder to make it happen better.”

Thanks to Siwas Dance Pop Revolution, JoJo now knows the work Jenna puts into choreography for DWTS, and how Abby Lee and her assistant choreographer Gianna felt trying corral the team — not to mention their mothers — on Dance Moms. “I am sending Gia the biggest bouquet of flowers,” JoJo says. “It’s hard to teach a bunch of kids what to do, and then it’s all new to the kids, and the kids are in a stressful environment, and I can relate to what the kids are feeling, because I was there at one point in time. However, I’m just like, ‘Guys, come on. I just need your attention right now.’ But their moms are fighting, so they’re looking at their moms, and I get it because I used to do that, but then I’m like, ‘Come on kids,’ so it’s crazy.”

On the show, Jessalynn and JoJo coach young girls from all walks of life. “I was looking for kids that knew they were stars, but needed our help to get there and define themselves,” Jessalynn explains. “I wanted kids that didn’t exactly know who they were, and we could help them grow into who they wanted to be. And I wanted kids that worked hard, and were excited every day on set, and also appreciated what we were doing here in the whole process. And wow. We found them.”

For Jessalynn, Siwas Dance Pop Revolution was a chance to put on her dance teacher shoes again, after giving up her own dance studio in their hometown of Omaha, Nebraska, to support JoJo’s career and training with Abby Lee. “When I was on Dance Moms with her, I always thought, what would I do if these girls were mine?” she says. But that doesn’t mean she didn’t take any pointers from JoJo’s former instructor. “You know, Abby taught me a lot,” she says. “She taught me to stick to what you believe in, and really go for it, and fight for what you want.”

Between these shows and her public coming out story, JoJo has had a transformative 2021. And if all goes her way, she’ll just keep dancing — on her planned 2022 tour and maybe on a second season of Siwas Dance Pop Revolution. “Truthfully, we don’t know if there’s going to be a Season 2 of Dance Pop Revolution yet,” she says. “But in my head, I want to go on tour, and then want to come back and I want to film Dance Pop again. I had so much fun with the kids. I love them. I hope the world’s going to love them.”