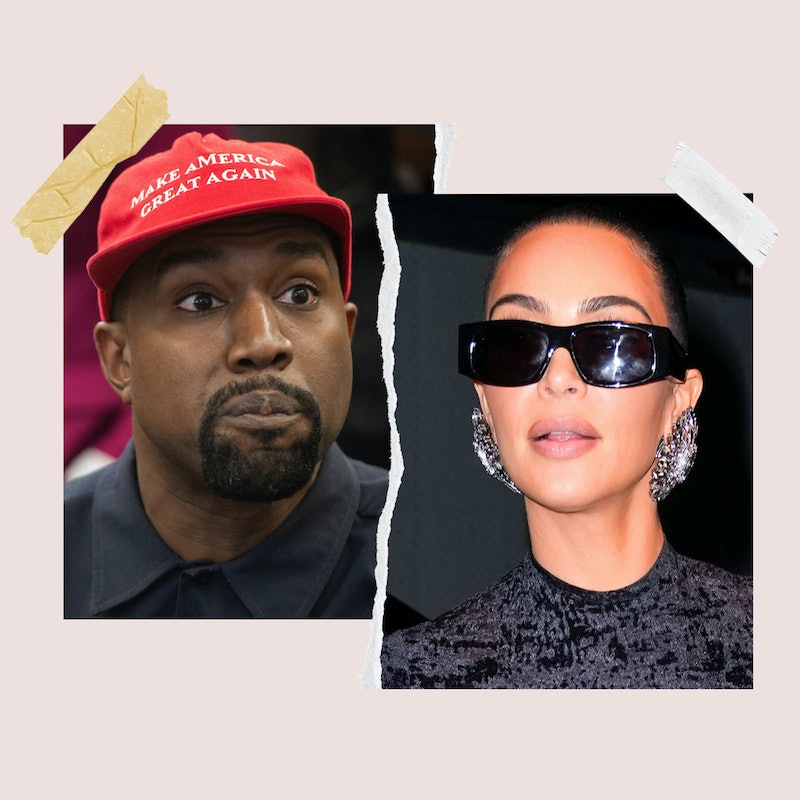 Kanye West’s Thanksgiving was full of introspection. On Thursday, Nov. 25, the rapper shared a five-minute-long prayer on Instagram that addressed his mental health, his alcoholism, his broken marriage, his failed presidential bid, and so much more. “All I think about every day is how to get my family back together and how I heal the pain that I’ve caused,” he confessed, adding that he takes “accountability” for the actions that led to his February split from Kim Kardashian. He also admitted that he “embarrassed” the reality star when he tried to transition from music to politics.

“Good Lord, my wife did not like me wearing the red hat,” West said, referring to the MAGA hat he wore throughout his campaign. “Being a good wife, she just wanted to protect me and our family,” the “Come to Life” artist continued. “I made me and my family a target by not aligning with Hollywood’s political stance and that was hard for our marriage.” West also said that he was unprepared to run for office and had no one on his side. “I embarrassed my wife in the way that I presented information about our family during the one and — thank God — only press conference.”

This isn’t the first time that West spoke about his failed marriage this week. During an appearance at the Los Angeles Mission’s Annual Thanksgiving Event Nov. 24, the rapper delivered a speech and made it clear that he’s hoping for a reconciliation. “The narrative God wants is to see that we can be redeemed in all these relationships,” he told the crowd, according to People. “We’ve made mistakes. I’ve made mistakes. I’ve publicly done things that were not acceptable as a husband, but right now today, for whatever reason — I didn’t know I was going to be in front of this mic — but I’m here to change the narrative.”

West also took aim at E! and Hulu over Kardashian’s reality TV projects. “I’m not letting E! write the narrative on my family,” he said in a video captured at the event. “I’m not letting Hulu write the narrative on my family.” He then asked the audience to pray for his family, explaining that he “[needs] to be back at home” and “next to [his] children as much as possible.” But as West continues to apologize and beg for forgiveness, the Skims founder doesn’t seem quite as eager to fix things. Earlier this month, a source confirmed to Entertainment Tonight that the reality star is “casually” dating comedian Pete Davidson.

Whether or not West will be able to mend his relationship with Kardashian remains a mystery. However, his Thanksgiving prayer shows a level of self-awareness that his family, friends, and fans have never seen before. “My ego has a tendency of going past the threshold of being motivational and entertaining to just being overbearing,” he said, explaining that “there are ways to show confidence without arrogance.” He also addressed his alcohol use and took accountability for going on and off his medication, which led to manic episodes that were damaging to his family. West was reportedly diagnosed with bipolar disorder in 2016.

The rapper went on to apologize for his “self-righteous Christian behavior” and his bad temper, explaining that “screaming might’ve helped me tell off everyone who doubted me in music, but that screaming did not help me keep my family together.” He closed out his prayer by encouraging others to take responsibility for their missteps and by expressing gratitude for his family. “This Thanksgiving, I’m thankful for the family that my wife has given me,” he said. “I’m thankful for the life that God has given me, and I’m thankful for your time, attention, and patience.”

More like this
Everything You Need To Know About Kanye's Post-Kardashian Dating Life
By Bustle Editors
Kim Kardashian Gives “Bucket List Dream” Lecture At Harvard
By Alyssa Lapid
North West Will Make Her Acting Debut Alongside Mom Kim Kardashian
By Radhika Menon
Did Pete Davidson Remove His Kim Kardashian Tattoos? Photos Point To Yes
By Alyssa Lapid
Get Even More From Bustle — Sign Up For The Newsletter
From hair trends to relationship advice, our daily newsletter has everything you need to sound like a person who’s on TikTok, even if you aren’t.