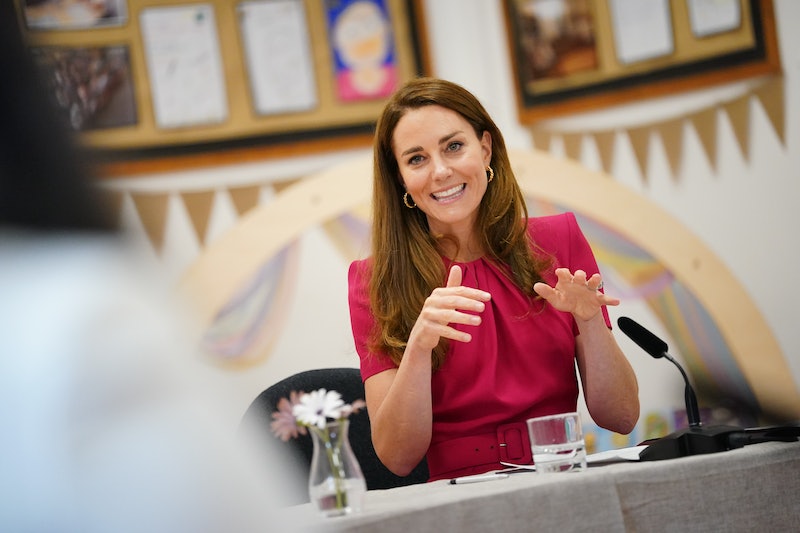 President Biden and First Lady Jill Biden’s trip to the United Kingdom for the G7 Summit in Cornwall marked the first overseas visit of the presidency — but another American, Lilibet Diana, was a hot topic for conversation among the press. As the first lady accompanied Kate Middleton for a school tour on June 11, reporters were eager to hear about the duchess’s one-week-old niece. The meaningful moniker of the latter pays tribute to both Lilibet’s great-grandmother, Queen Elizabeth II, and her late grandmother, Princess Diana.

“We haven't met her yet," the duchess said at the event, as reported by the BBC. "I hope that will be soon ... I wish her all the very best. I can’t wait to meet her.” Kate also added that she hasn’t FaceTimed with Meghan after the birth of Lilibet “Lili” — the de-facto way to share big news when an ocean, pandemic, or both keeps you apart from loved ones. It’s the first time Kate or Prince William have publicly acknowledged their niece since celebrating her arrival on social media. On June 6, they took to Twitter and Instagram, writing that “we are all delighted by the happy news of the arrival of baby Lili. Congratulations to Harry, Meghan and Archie.”

The warm wishes come after a rumored bout of name drama for the royal family. On June 9, a source told the BBC that Meghan and Harry had not consulted with Queen Elizabeth when deciding to use her childhood nickname, Lilibet. (The name stems from the monarch’s inability to pronounce “Elizabeth” as a young princess). However, a spokesperson for the couple clarified that this was not the case.

“The duke spoke with his family in advance of the announcement,” the spokesperson said, as reported by the BBC. “In fact, his grandmother was the first family member he called ... had she not been supportive, they would not have used the name." In the wake of the family’s public tension — most notably explored in Oprah’s tell-all interview with Meghan and Harry in March, then in Harry and Oprah’s mental health docuseries The Me You Can’t See — the name was seen by many as a sweet, symbolic gesture. On their Archewell website, the couple wrote that Lili Diana was “more than we could have ever imagined,” nothing that they “remain grateful for the love and prayers we’ve felt from across the globe.”

Kate’s brief but warm wishes echo the idea of a steadily healing family — but here’s hoping that FaceTime happens soon.