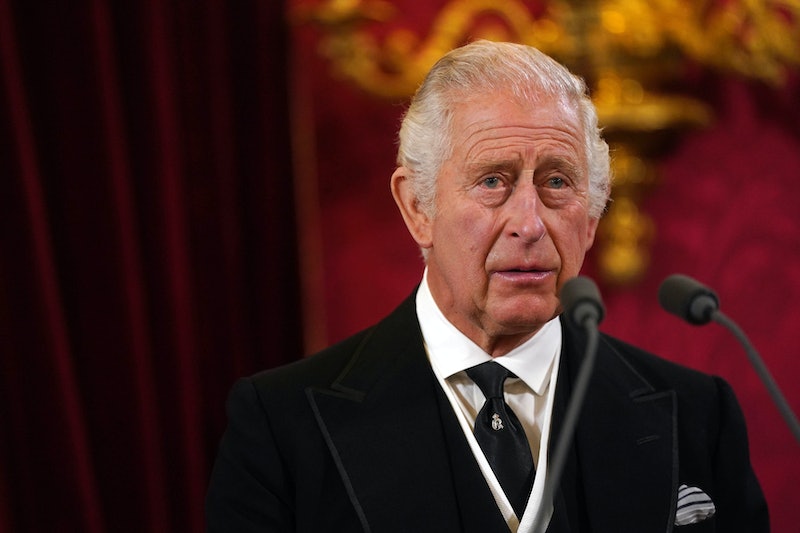 On Sept. 8, Buckingham Palace announced that Queen Elizabeth II had died aged 96. The Queen’s eldest son, King Charles III, became the new monarch after Her Majesty’s passing. On Sept. 9, Charles gave his first speech as King, in a pre-recorded video message at Buckingham Palace, during which he paid tribute to his mother’s “life of service.” On Sept. 19, the funeral of Queen Elizabeth took place at Westminster Abbey, and the late monarch was eventually laid to rest at Windsor Castle.

As the British people usher in a new royal era, many are now wondering how King Charles III’s reign will differ from that of his beloved “mama.” Following the death of the Queen, the British national anthem has been updated to “God Save The King,” to reflect the reign of King Charles III. This version of the national anthem has not been in circulation since the sudden death of the Queen’s father, King George VI, in 1952. Read on for more on King Charles’ reign.

Where Does King Charles III Live?

King Charles III and Camilla, Queen Consort have lived at London’s Clarence House and the Highgrove estate in Gloucestershire since their wedding in 2005. At the time of publication, there has been no official statement regarding where King Charles will reside throughout his reign. However, tradition dictates that the British monarch will live at Buckingham Palace, Queen Elizabeth’s long-time residence and the centre of the royal family’s London life.

Buckingham Palace is currently in the midst of a £369 million refurbishment, meaning Charles and Camilla might prefer to live in another royal residence until its completion, as the Queen did prior to her death.

Speaking previously to the Daily Mail, a source claimed that Charles is of the view that Buckingham Palace is “the visible symbol of the monarchy in the nation’s capital and therefore must be his home.” The insider continued: “There is no question about it. HRH’s view is that you need a monarch at monarchy HQ. This has never been in doubt.”

That said, the Daily Mail later claimed that the King also thinks the historic building “too large, too impersonal and too draughty”. It remains to be seen which residence he will eventually settle on.

Has The UK’s Money & Stamps Changed?

Banknotes and coins currently in circulation across the United Kingdom will eventually be phased out with new money featuring the face of King Charles III. On Sept. 30, The Royal Mint unveiled the 50p and a commemorative £5 coin featuring the new monarch’s portrait.

Following years of tradition, the new coins display Charles’s effigy facing left, the opposite way to his late mother and predecessor, Queen Elizabeth II. The King is also not wearing a crown in the portrait, unlike the previous British monarch. The 50 pence coins will enter circulation later in 2022 and will co-circulate with coins that feature Queen Elizabeth – which will still be deemed legal tender for many years to come.

“People should not worry if they have coins with the Queen on. We will keep those coins in circulation,” explained Anne Jessopp, the chief executive of The Royal Mint, in a statement. “We are seeing people moving to different forms of payment, but people really like to use coins as well for lots of different reasons.”

On Dec 20, The Bank of England also shared a sneak peek at the forthcoming new banknotes, bearing the likeness of His Majesty. In line with his previously-shared coin portrait, the King is not wearing a crown here, and is facing to the left – the same direction the Queen’s portrait faces on current banknotes. They will reportedly enter circulation in mid-2024, as per The Guardian.

The UK’s central bank also said that they planned to minimise the environmental and financial impact of the switch, and would only be printing new notes to replace older, worn-out bank notes. This approach is said to be informed by the royal household’s direct guidance, and means that new bank notes bearing the King’s likeness will co-circulate with our current bank notes.

The other side of each bank note – which bears portraits of various influential British figures – will remain unchanged. Author Jane Austen will remain on the £10 notes, along with artist JMW Turner (£20) and mathematician and code-breaker Alan Turing (£50).

As per Metro, stamps featuring the portrait of Queen Elizabeth II will also be replaced with an image of King Charles III.

Will King Charles III Give A Christmas Address?

Following in the footsteps of the late Queen, who famously addressed the nation directly each Christmas in a pre-recorded speech, King Charles III will also follow suit with his own televised message. As per The Daily Telegraph, his festive message has already been recorded ready for Dec. 25, and the paper understands that it was filmed before the release of Prince Harry and Meghan Markle’s candid new documentary, which explores stepping back from royal life. According to an insider source, the King will not directly address the allegations in his Christmas message, and instead, it is more likely that he will pay tribute to his late mother Queen Elizabeth II.

The forthcoming address will make King Charles III the first male monarch to address the nation on television. The Queen’s predecessor King George VI delivered his own messages on the radio –televisions were still very much a luxury item during his reign, and didn’t really become a common household object until the 1950s.

Upon Her Majesty’s passing, the official titles of several senior royals have changed. The Duchess of Cornwall became Queen Consort when her husband, King Charles, ascended the throne. Meanwhile, Prince William and Kate Middleton are now titled Duke and Duchess of Cornwall, and King Charles has also granted them the title of Prince and Princess of Wales.

King Charles III is reportedly aiming for a “slimmed-down monarchy,” as per the Daily Mail. This could mean that official royal duties and appearances will only be carried out by a small number of senior royals — King Charles, Camilla, Queen Consort, the Prince and Princess of Wales, Princess Anne, and the Earl and Countess of Wessex.

He is also said to be planning a smaller-scale “low-carbon” coronation in May 2023. “The King, as well as his religious and state advisers, will be very aware that the coronation will be coming off the back of a very difficult winter for people and they will not want the event to be discordant with the mood of the nation,” a source told The Daily Express.

“The King is by nature quite a frugal person whenever he is able to be and I would expect he will want the coronation to focus more on the spiritual elements than the more showy parts.”

More like this
The Spice Girls Are Set To Reunite At King Charles III’s Coronation
By Sam Ramsden
Princess Diana’s Brother Shared A New Photo Connected To Her Childhood
By Darshita Goyal
Gillian Anderson's New Netflix Drama Is *Nothing* Like 'Sex Education'
By Frances Stewart
Helena Bonham Carter Doesn't Think 'The Crown' “Should Carry On"
By Sam Ramsden
Get The Very Best Of Bustle/UK
Sign up for Bustle UK's twice-weekly newsletter, featuring the latest must-watch TV, moving personal stories, and expert advice on the hottest viral buys.

This article was originally published on Sep. 12, 2022