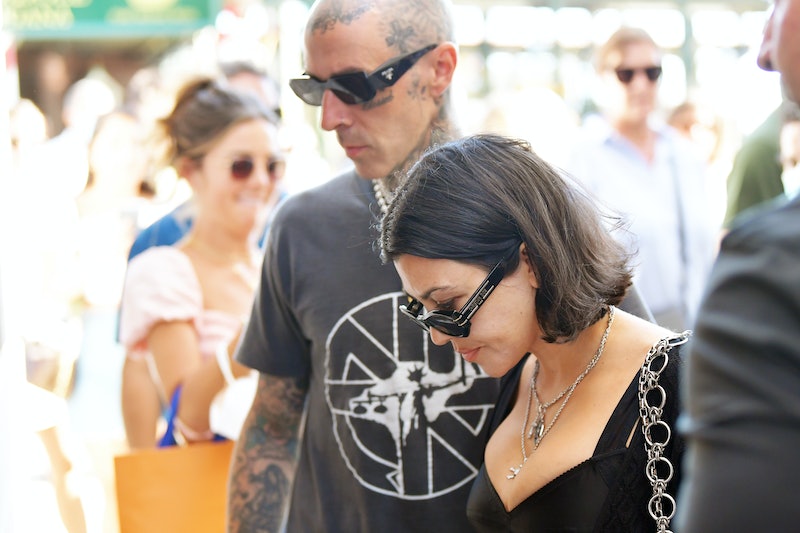 For the first time ever, Kourtney Kardashian has confirmed she’s trying for another baby with (almost husband) Travis Barker — but it hasn’t been an easy process. Kardashian opened up about her IVF journey on the second episode of The Kardashians on April 21, saying that it “hasn’t been the most amazing experience” and admitting she’s had depression as a result of her treatments.

In a confessional, Kardashian said she thinks her IVF medications are acting as a contraceptive rather than helping her and Barker conceive because she’s “so clean and careful with what I put into my body” that it’s “having the complete opposite reaction.” Speaking to her mom Kris Jenner at home, she said the medications have put her into menopause, which affects her moods. “The medication basically put me into depression,” she said. Kardashian also told her mother that her and Barker want one more child “so badly because we want to make something together.” Jenner reassured her that a baby will come when the time is right. “You’ll have a beautiful baby, probably a year from now, we’ll be sitting right here and you’ll be like, ‘Come get the baby, it’s crying!’”

“I have everything in the world to be happy about. I just feel a little bit off, not like myself, super moody and hormonal, like I’m a lunatic half the time.”

While talking about her depression, 43-year-old Kardashian elaborated on how exactly she’s been feeling throughout her IVF process amid other things happening in her life: “I have everything in the world to be happy about. I just feel a little bit off, not like myself, super moody and hormonal, like I’m a lunatic half the time.”

Because IVF hasn’t been a success so far, Kardashian said Instagram comments about her body changes and pregnancy speculation are getting to her more than usual. “Every single person on social media is like, ‘Kourtney’s pregnant, Kourtney’s gained so much weight’,” she said. “I’m like, it’s so rude to comment on people when you have no idea what they’re actually going through.”

Earlier in April, Us Weekly reported that Kardashian was taking IVF “very seriously” and 46-year-old Barker was supporting her every step of the way. If successful, their baby would join Kardashian’s three kids with ex-boyfriend Scott Disick, 12-year-old son Mason, 9-year-old daughter Penelope, and 7-year-old son Reign, as well as Barker’s 16-year-old daughter Alabama, 18-year-old son Landon, and 23-year-old stepdaughter Atiana De La Hoya. “She feels like she’s almost at the cut-off age of having kids, so this is almost like her last chance,” a source told the outlet, adding that the couple was “praying for a miracle.”

Can IVF Cause Depression?

It’s common for patients who undergo IVF and most fertility treatments in general to experience depression and anxiety, especially those who undergo failed treatments, given how stressful the process can be. Depression can also occur after successful IVF treatments, according to WomensMentalHealth.org, with symptoms similar to prenatal depression.

Amy Schumer has been open about her struggles with IVF treatments: “I did IVF, we made embryos and I went through the IVF process, which is so hard. People do it so many times. I did it one time and I was like, I’m gonna die. This is awful,” Schumer told People. “I’m excited about it but I was sad. And it’s not really something you get sympathy for because it’s like, you already have one, b*tch, shut up. But you know, that’s a real struggle people go through."