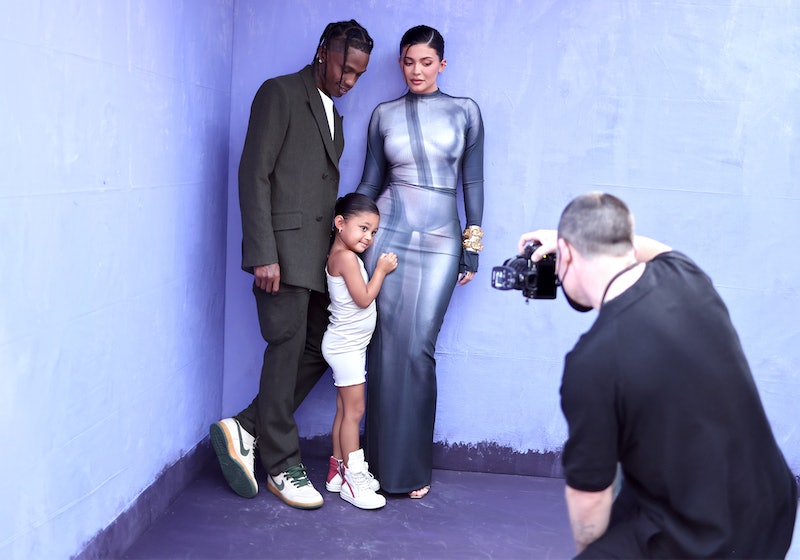 Kylie Jenner and Travis Scott turned the 2022 Billboard Music Awards into a family affair. The couple brought their daughter, 4-year-old Stormi Webster, along for the evening to walk the red carpet and watch the rapper’s first televised performance since the Astroworld Festival tragedy.

The beauty mogul, who recently gave a postpartum update on TikTok, posed for photos as a duo with boyfriend and as a trio with their daughter. Jenner was clad in a trendy silver and blue naked dress, and the Balmain gown featured thermal image print to give it its human body optical illusion. Scott sported a dark green/brown suit, plain white T-shirt, and green and beige Nike sneakers. Stormi donned a white asymmetrical dress and white sneakers.

Scott performed during the awards show in his first TV performance since 10 people were killed and hundreds were injured at his Astroworld Festival in November 2021. He took to the main stage to rap his songs “Lost Forever” and “Mafia,” which was released alongside a second single, “Escape Plan,” also in November 2021. Both tunes dropped on the day of the tragedy. His BBMAs performance took place in what looked like a snowy bunker, complete with backup dancers.

After his performance, Scott was greeted backstage by his girlfriend and daughter for a heartwarming embrace. The Billboard Music Awards social media accounts shared the sweet moment of the rapper lifting Stormi into the air and hugging her. A moment later, Jenner enveloped them both before they walked off together.

Hours before the 2022 Billboard Music Awards began, Jenner shared a snap of her and Stormi on what appears to be a private jet, presumably heading to the ceremony. She captioned the picture “gorgeous gorgeous girls.”

Jenner and Scott have experienced an on-again-off-again relationship throughout the years, but at present, they are happily together. After the two were spotted together for the first time at Coachella in 2017, they quickly became a closely followed couple. Jenner gave birth to Stormi in February 2018, but she and her rapper beau split less than two years later. After quarantining together, they reunited, and in February 2022, Jenner gave birth to their second child.

In addition to performing at the Billboard Music Awards, Scott was up for Top Dance/Electronic Song for the HVME-led reworking of his single “Goosebumps.” The honor ended up going to Elton John, Dua Lipa, and Pnau’s “Cold Heart,” beating out Scott and HVME, Farruko, Tiësto, and the trio of Regard, Troye Sivan, and Tate McRae.