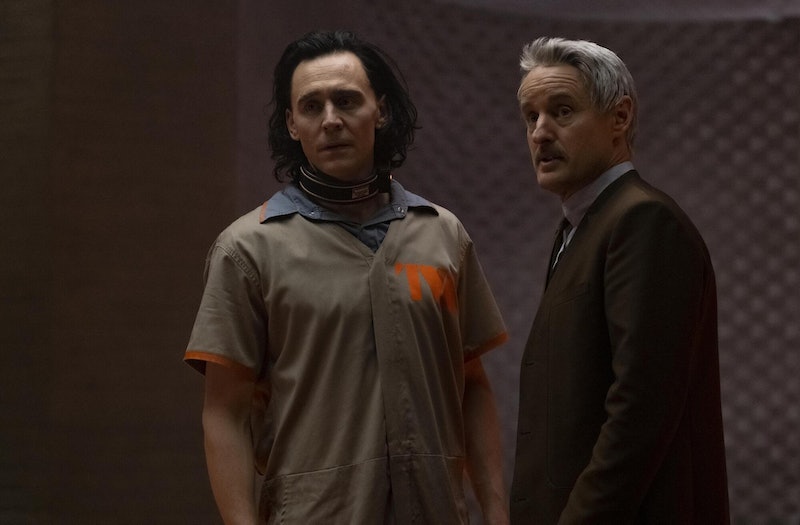 Reddit’s Marvel lovers have been burdened with glorious purpose: theorizing what might be next for the God of Mischief when Loki premieres on June 9. Though Loki was in a pretty good place with Thor (as good as can be with these chaotic brothers, anyway) by the time of his redemptive sacrifice in Avengers: Infinity War, the Loki of Disney+’s new series is a very different person — fresh from the 2012 attack on New York and, ostensibly, mischievous as ever.

The promise of a newly volatile Loki tasked with navigating precarious, tricky timelines via the Time Variance Authority is enough to make analytical fans wonder, just how much trouble is Loki going to get into this time around? According to Reddit users, the consensus seems to be quite a lot. Here are some of the most intriguing theories about Loki’s role in the upcoming series.

Though the trailers for Loki have acknowledged the idea of several Loki “variants,” it still unclear whether certain characters we’ve seen (e.g., Loki in a presidential campaign outfit) are 2012 Loki playing a role to get the timelines in order, or different manifestations of his character altogether. Reddit user Tarzan_OIC suggested the latter, writing that other Lokis could be “adversaries” to the central version. “I personally would love to see Tom Hiddleston get to play against alternate takes of his character, and we have seen marvel do that pretty successfully with Cap and Vision,” Tarzan_OIC continued, referencing the events of Endgame and WandaVision, respectively.

User KostisPat257 concurred, suggesting that the image of Loki in horns and a campaign-ready ensemble is “president Loki is from Sakaar.” What would it look like if Ragnarok-era Loki did stay on the trash planet as he intended?

At one point in the Loki trailer, a screen appears to display a line representing the flow of time — with several branches splitting off, including two that look dangerously close to colliding, as pointed out by user vibemecha1. The collision of timelines could have far-reaching impacts on the events of Loki and the entire MCU, perhaps even making way for the rumor that multiple Spider-Mans could be in the same place at the same time in Spider-Man: No Way Home. Of course, we may not even need to wait for December to see the implications of a wayward timeline...

According to Reddit user heathen_yogi, the rumor that Chris Evans might return as Captain America could actually come true in Loki. Steve’s final Endgame mission of returning the Infinity Stones to their rightful place in the timeline “could create a butterfly effect that attracts the time cops working with Loki,” heathen_yogi suggested. The fan also went on to propose that the interaction with the time cops, or Time Variance Authority, “may be what convinces Steve to go back to the 40s and have the life he always wanted.”

Of course, Evans previously told Entertainment Tonight that he would “probably not” return to the MCU: “To stick the landing so well, it would be a shame to kind of revisit, unless there was something very unique that we felt the need to reveal.” But what if Loki was that “very unique” thing? After Steve’s emotional sendoff, Evans might not want to retread deep, legacy-talk territory by playing mentor to Sam Wilson’s Cap. That said, a brief cameo in an unexpected setting would allow Evans to pull off a playful surprise without wading into anything too serious. Plus, it wouldn’t be the first time the actor appeared on Loki’s turf. Just give Thor: The Dark World a rewatch to see his hilarious take on Loki playing Captain America.

Loki Joins The ‘Multiverse Of Madness’

What better company for the God of Mischief than Doctor Strange and Scarlet Witch — aka Wanda Maximoff, whose magic reached dangerous new levels in WandaVision? The latter two will appear in Doctor Strange in the Multiverse of Madness, and Reddit user Possibility-Agitated posits that Loki will join them as they combat a common enemy. The user cited a recent Doctor Strange comic run in which the three appeared together and WandaVision’s reference to “Nexus Beings,” which are monitored by the Time Variance Authority in the comics. Yep, the same Time Variance Authority that’s working with Loki in his new show.

The fact that Loki’s head writer Michael Waldron co-wrote the screenplay for Multiverse of Madness certainly supports the idea of a continuing story. Waldron also told Total Film, “Our aim with the Loki series was for it to have wide-reaching ramifications across the MCU moving forward. So, you know, was I having to clean up some of the messes that I made [with Loki]? Maybe so."

It won’t be long before viewers find out if these theories hold up. Either way, early rumors of a Season 2 for Loki suggest that the beloved character still has plenty more mischief to get into.

More like this
Netflix Shut Down 'Bridgerton' S3 Rumours About A “Very Dark” Storyline
By Bustle
Twitter Is Overjoyed By Angela Bassett’s Record-Making Oscar Nomination
By Maxine Harrison
'Happy Valley' Recreated This Moment From S1 In Its Penultimate Episode
By Sophie McEvoy
This Dark 'Happy Valley' Theory Is Staring You Right In The Face
By Sophie McEvoy
Get Even More From Bustle — Sign Up For The Newsletter
From hair trends to relationship advice, our daily newsletter has everything you need to sound like a person who’s on TikTok, even if you aren’t.