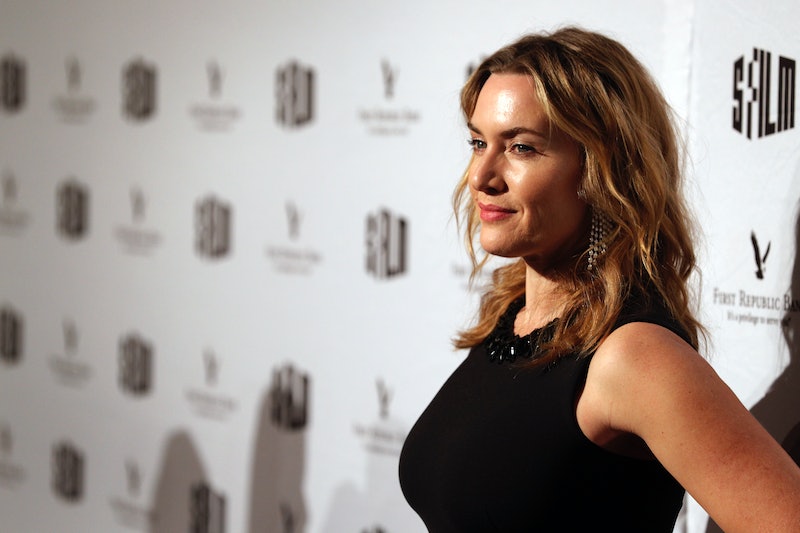 Kate Winslet’s resume is incomparable. From her star-making turn in the 1997 Academy Award-winning film Titanic to her current role as Mare Sheehan in the HBO limited series Mare of Easttown, the A-list actress continues to captivate audiences. In April, Winslet spoke to NPR’s Terry Gross about her start in the entertainment industry at the age of 17 and how her life changed just three years later, thanks to Titanic. “It changed my career completely ... I learned so much about acting, about the process of filmmaking. I was learning on the fly, really on the fly.”

Now 45, the international celebrity has maintained a successful onscreen career since she starred as Rose Dawson, who risked it all for Leonardo DiCaprio’s character. The Oscar winner is known for portraying headstrong, complicated women, and she has proven her range in genres spanning young adult movies (the Divergent series), period piece TV shows (Mildred Pierce), and even oddball ensemble comedies (Movie 43). Here’s a batch of must-see movie and TV projects starring the irrepressible Kate Winslet:

Of course, Titanic is the film that kickstarted Winslet’s enviable acting career (and earned her a Best Actress Oscar nod). Upon its release, a 22-year-old Winslet shot to fame and became the envy of those who longed for her costar, DiCaprio. She even admitted that her personal friends became jealous of the onscreen couple’s steadfast bond. “The closeness and the strength of friendship that we had is something a lot of my friends envy like mad. But to me, he’s just silly old Leo,” she told People. Their friendship spans more than two decades, and according to recent headlines, is still going strong.

Who doesn’t love a good holiday movie? Arguably one of the best modern-day festive films, and a Winslet classic, is the feel-good rom-com The Holiday. In it, Winslet plays Iris Simpkins, a lovelorn columnist who decides to do a vacation house swap with Amanda Woods (Cameron Diaz). Jude Law and Jack Black also star as the actors’ love interests in the movie that’s always on heavy rotation every winter.

Kate’s role as Clementine Kruczynski in Eternal Sunshine of the Spotless Mind is much more whimsical than a number of others she’s inhabited. Perhaps that’s why it’s one of her most memorable. In the 2004 romantic sci-fi movie, directed by Michel Gondry, Clementine undergoes an operation in which memories of her ex-boyfriend Joel Barish (Jim Carrey) are erased from her brain. Viewers are faced with the question of what it means to love another when Joel decides to experience the same procedure.

Kate and Leo’s post-Titanic reunion took place in the 2008 film Revolutionary Road. This time around, the iconic on-screen pair found themselves in the 1950s as husband Frank Wheeler and wife April Wheeler. Like Jack and Rose, the Wheelers’ relationship is also marred by tragedy, leaving fans to wonder if Winslet and DiCaprio will ever star together in a movie that ends happily.

Kate takes a leap into the early creation days of Macintosh computers in the 2015 biopic, Steve Jobs. In the film, she plays marketing executive Joanna Hoffman, known as one of the original members of Jobs’ Macintosh team and also considered his “right-hand woman.” Fassbender, who portrays the late business magnate, and Winslet’s electric chemistry is undeniable. The latter told Entertainment Weekly in 2015 that after she caught wind of the role, she found a picture of Hoffman and auditioned by donning a “short-haired dark wig” and sending a photo of herself to producer Scott Rudin. She was later offered the part after meeting with director Danny Boyle.

The Mountain Between Us

Hany Abu-Assad’s The Mountain Between Us might be considered an offbeat choice, considering that critics have continued to pan the suspenseful flick after its release in 2017. Still, Kate and costar Idris Elba’s acting chops make the 2017 disaster movie satisfactory for anyone seeking late-night viewing of a dram-rom about two strangers fighting to survive after a plane crash.

Mildred Pierce earmarked several firsts for Winslet’s glittering acting career. It not only was the first HBO miniseries Winslet starred in, but she earned her first primetime Emmy award in 2011 for her role as the titular character of the TV adaptation. Ten years after the release of Mildred Pierce, Winslet took a look back at her work as a performer in the series and her second HBO series project, which she co-executive produced – Mare of Easttown.

“I’m not one to follow a trend. I just like to do my own thing. So there’s a reason that I didn’t get into producing earlier in my career. I’m an actor, and I love my job. With ‘Mare,’ it just felt like the right time,” she told Indiewire in retrospect.

Kate Winslet’s TV projects aren’t as plentiful on her resume as the movies she’s starred in, but her tour-de-force acting still shines through on the small screen, as shown in HBO’s Mare of Easttown. The drama centers around Winslet’s character, Detective Mare Sheehan, who sets out to find the murderer of a 17-year-old girl in the small Pennsylvania town where she was once a local teenage sports hero. “Mare Sheehan is — she’s kind of disgusting. She’s a hot mess most of the time. She doesn’t give a sh*t what she looks like. She’s kind of stopped caring what people even think about her,” Winslet described to Indiewire.

Winslet added, “We made decisions creatively that this was a woman who looked at herself in the mirror when she brushed her teeth in the morning and would not look in the mirror again [all day]. That’s just who she is. That’s like most busy mothers I know — that’s like me.”

New episodes of Mare of Easttown drop on Sundays on HBO Max.

More like this
Here’s Everything Coming To & Leaving Netflix In February
By Jake Viswanath
Bill & Frank’s 'The Last Of Us' Episode Has Twitter Emotionally Wrecked
By Alyssa Lapid
The 8 Best Aidan Shaw Moments On 'Sex And The City'
By Grace Wehniainen
At 28, Rosie Perez Risked Her Career To Stop Playing Stereotypes
By Gabrielle Bondi
Get Even More From Bustle — Sign Up For The Newsletter
From hair trends to relationship advice, our daily newsletter has everything you need to sound like a person who’s on TikTok, even if you aren’t.