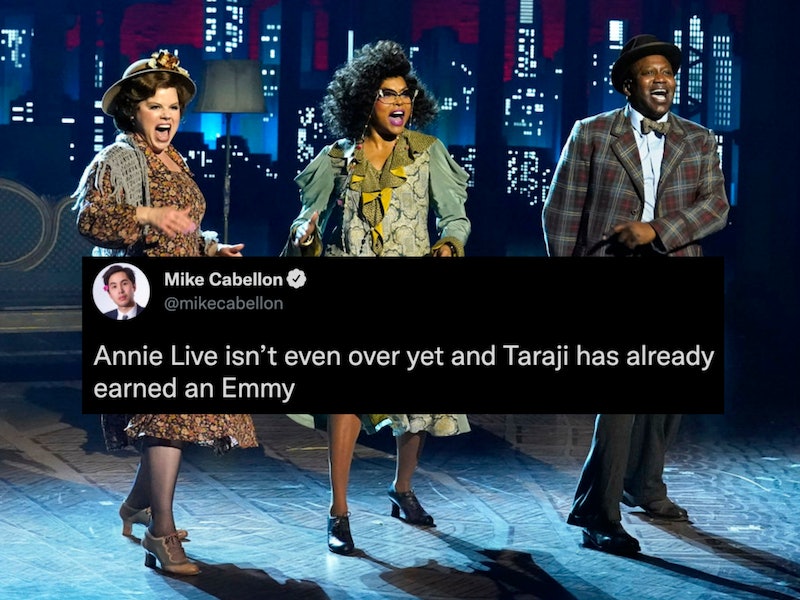 It’s a hard-knock life for us — but not for Annie fans, who were treated to a new take on the classic musical with NBC’s Annie Live!, which aired on Dec. 2. The network’s latest live musical extravaganza had an A-list cast taking on the iconic characters, including Taraji P. Henson as Miss Hannigan, Nicole Scherzinger as Grace Ferrell, Tituss Burgess as Rooster, Harry Connick Jr. as Daddy Warbucks, and star-in-the-making Celina Smith in the titular role. And judging by Twitter’s reaction to the live musical, they’ll still be loving Annie Live! tomorrow.

Just like NBC’s live musical productions of Hairspray, The Wiz, and many more before it, Annie Live! was a theatrical spectacle to behold. All of the show’s numbers were staged faithfully to the original Broadway musical and beloved films, with dozens of talented child performers, Henson’s portrayal of a lovably wicked Miss Hannigan, Scherzinger’s impressive vocal acrobatics as Grace, and of course, one very good doggo. As the special came to an end with Smith and a choir of children singing a cappella, there wasn’t a dry eye on stage (or in some living rooms).

Many fans were impressed with 12-year-old triple threat Smith, who stunned with her vocal takes on classics like “Tomorrow” and “It’s A Hard Knock Life.”

The Other Kids Slayed Too

Viewers were impressed by all of the young dancers in the production, who performed like they were true seasoned pros, with Twitter taking note of one kid in particular.

“I Did Not Know Taraji Could Sing”

That said, many fans were still stunned by the seasoned adult actors, especially Henson’s performance as Miss Hannigan. Who knew Cookie could sing like that?

Pussycat Dolls alum Scherzinger also received rave reviews — and a couple memes — from Twitter for her portrayal of Grace.

Of course, fans also praised the true star of the show: Sandy, the good dog and loyal pup sidekick you’ve always dreamed of.

As expected, Twitter’s memes were on fire, especially when it came to Connick Jr.’s bald cap.

More like this
Selena Gomez’s ‘SNL’ Hosting Debut Had Twitter Gushing Over ‘Barney’ & Wigs
By Stephanie Topacio Long
Elizabeth Olsen’s ‘SNL’ Cameo Made Benedict Cumberbatch A Multiverse Believer
By Grace Wehniainen
Twitter Is Buzzing Over New ‘Doctor Who’ Lead Ncuti Gatwa & His Historic Casting
By Stephanie Topacio Long
What Is Barack Obama’s Net Worth? He Makes *Way* More Now As An Ex-President
By Hugh McIntyre
Get Even More From Bustle — Sign Up For The Newsletter