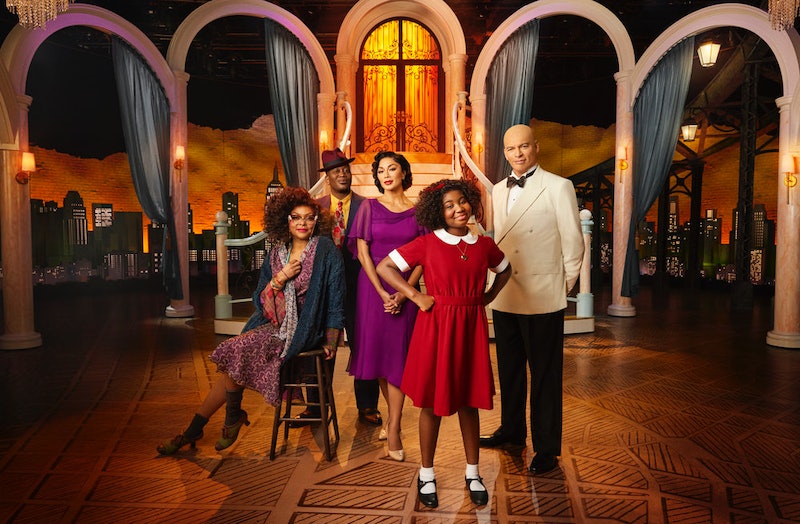 NBC’s Annie Live! is set to air on Dec. 2, and it marks the fourth onscreen adaptation of 1977’s Annie the musical, based on Harold Gray’s long-running Little Orphan Annie comic strip. Set during the Great Depression in 1930s New York City, the musical follows eleven-year-old Annie as she escapes from the orphanage where she lives to embark on a quest to find her parents. After getting past maniacal orphanage owner Miss Agatha Hannigan, Annie’s taken in by eccentric billionaire Oliver Warbucks, who wants to adopt her. She declines at first, determined to escape her hard-knock life and find her biological family. But after a con artist couple poses as her parents in an attempt to adopt her, Warbucks permanently reunites with Annie and reminds her “the sun will come out tomorrow.”

Annie was first adapted for the big screen in 1982, five years after its Broadway debut. Directed by John Huston (1956’s Moby Dick), the movie received Oscar nominations for Best Production Design and Best Original Score and was a commercial success, grossing over $57 million on a $35 million budget. Disney and Columbia Pictures then produced a made-for-television film version of the musical in 1999, which was viewed by over 26 million people and received a Peabody Award and two Emmy nominations. Fifteen years later, a present-day film version of Annie hit theaters, featuring a racially diverse cast and music by Sia, and it received two Golden Globe nominations. Marking its first-ever onscreen adaptation to be broadcast live on television, NBC’s Annie Live! will offer yet another fresh take on the iconic musical. Here’s how the new live version’s actors compare to those who appeared in the original 1982 film.

Stepping into the titular role for NBC is 12-year-old Celina Smith, who was chosen after an open nationwide audition, similar to the leading actors in the network’s The Wiz Live! and Hairspray Live! While she’ll take on her first leading role in Annie Live!, she previously acted as Young Nala in the national tour of The Lion King and Rebecca Wilson in Tyler Perry’s Young Dylan. Speaking to Today for a recent interview, Smith recalled the moment she found out she was cast as Annie. “We were in my mom’s room and my team called and they were like, ‘What are you going to be doing this October?’” she said. “I was like, ‘I don’t know.’ And then they were like, ‘You’re going to be in New York doing Annie Live! this October.’ And I screamed!”

Following a minor role in 1981’s Paternity, Aileen Quinn scored her breakout role in 1982’s Annie. She’s acted in several other projects since the film’s release, most recently appearing in a 2020 episode of Will & Grace. According to her LinkedIn page, she worked as an Arts Professor for two years at Monmouth University, where Annie was partially filmed. She also has a band called Aileen Quinn and The Leapin’ Lizards, which released its most recent album, Lightning and Thunder, in 2019.

Emmy and Grammy award-winning jack-of-all-trades actor, singer, pianist, and host Harry Connick Jr. will portray Oliver “Daddy” Warbucks in NBC’s Annie Live! While he hasn’t previously played the role, he covered a few of the musical’s songs for his 2001 Songs I Heard album, which won a Grammy for Best Traditional Pop Vocal Album. In a recent interview with Channel Guide magazine, Connick spoke about his relationship to the Annie soundtrack. “I’ve always loved the whole score. It’s a really beautiful piece of work,” Connick told the publication. “Probably my favorite is this song called ‘Something Was Missing,’ which is one of the songs I recorded, and I get to sing it in this production.”

Reportedly beating out Sean Connery and Cary Grant for the role, Daddy Warbucks was played by Albert Finney in the original 1982 film. Also known for playing the titular characters in 1963’s Tom Jones and 1970’s Scrooge, the actor passed away at 82 years old in 2012 following his final film appearances in The Bourne Legacy and Skyfall.

Taraji P. Henson was the first actor to be cast in Annie Live!, scoring the role of tyrannical orphanage owner Miss Agatha Hannigan. While she’s more well-known as a film and television star, the Oscar nominee recently told Yahoo! News she feels most comfortable doing theater. “I always feel home on the stage. When I was second-guessing or questioning whether I was still in love with this thing called ‘TV and Film,’ I said, ‘the tell-tale will be how I feel when I go back to the stage,’” Henson said. “The stage is a spiritual place for me. It really is... I feel more at home in a theater on a stage than I do with the foreign cold camera looking at me.”

After Bette Midler was initially considered for the role, Carol Burnett was cast in the 1982 film as Miss Hannigan. At the time, she was four years removed from the end of The Carol Burnett Show, which won 25 Emmys during its 11-year run. In a 2020 interview with Forbes, the legendary actor and comedian reminisced on her time working on Annie. “I think it was well cast and directed, it’s a wonderful, timeless story, and Aileen Quinn was the perfect Annie,” she told the magazine. “It’s about love, it’s exciting, it’s a fairytale, and it’s a little scary too, so it has it all. Plus, I think it comes across that we all had so much fun doing it.”

Known for acting in Jersey Boys and The Little Mermaid on Broadway, Unbreakable Kimmy Schmidt on Netflix, 2020’s TikTok-created Ratatouille the Musical, and his Bachelor in Paradise hosting gig, Tituss Burgess will appear in Annie Live! as Daniel Francis “Rooster” Hannigan, aka Agatha’s con artist brother. Following his recent appearance in the Aretha Franklin biopic Respect, he said of his Annie Live! role, per The Hollywood Reporter: “I’ve always wanted to be a villain.”

In the original film, the role of Rooster was played by Emmy winner and Tony nominee Tim Curry, well-known for his portrayal of Dr. Frank-N-Furter in 1975’s The Rocky Horror Picture Show. “Rooster was a hustler, and people love that kind of character,” Curry, who’s beloved for his many villainous roles, told Forbes in 2020. “He was a lot of fun. I approached it very much in my way, but [Burnett, Bernadette Peters, and I] were very close. We were like The Three Musketeers. Carol is, of course, a legend and probably the funniest woman alive.”

Known as the lead singer of the Pussycat Dolls, Nicole Scherzinger has performed in her fair share of musicals, including Neil Patrick Harris’ 2010 production of Rent, a 2014 West End revival of Cats, and Disney’s Moana. In Annie Live!, she’ll take on the role of Grace Farrell, Warbucks’ personal secretary. Speaking to Tamsen Fidal on a recent episode of The Broadway Show, Scherzinger detailed her admiration for Ann Reinking and Audra McDonald, who played the character in the 1982 and 1999 film adaptations, respectively. “I’m excited because I truly admire those women,” she said. “I’m super inspired by both of their interpretations of the role, and then I’m a very saucy girl and I love a lot of spices, so I put a lot of my own flavor into it.”

One-time protégée and significant other of Bob Fosse, Reinking was already known for her Tony award-winning Broadway career, which included lead roles in Goodtime Charley, A Chorus Line, and Chicago. Mostly known for her onstage work, Annie marked one of only four film roles in the actor, dancer, singer, and choreographer’s filmography. Following a 50+ year career, Reinking passed away in December 2020 while sleeping in a Seattle hotel during a family visit.

More like this
Olivia Rodrigo Manifested Finally Meeting Demi Lovato
By Jake Viswanath
The Jonas Brothers' New Album Has A Very Meta Name
By Alyssa Lapid
Cruz Beckham Teased New Music With An Adorable Nod To Mom Victoria Beckham
By Stephanie Topacio Long
Hilary Duff's Husband Matthew Koma Has Her Name Tattooed On His Butt
By Jake Viswanath and Stephanie Downs
Get Even More From Bustle — Sign Up For The Newsletter
From hair trends to relationship advice, our daily newsletter has everything you need to sound like a person who’s on TikTok, even if you aren’t.