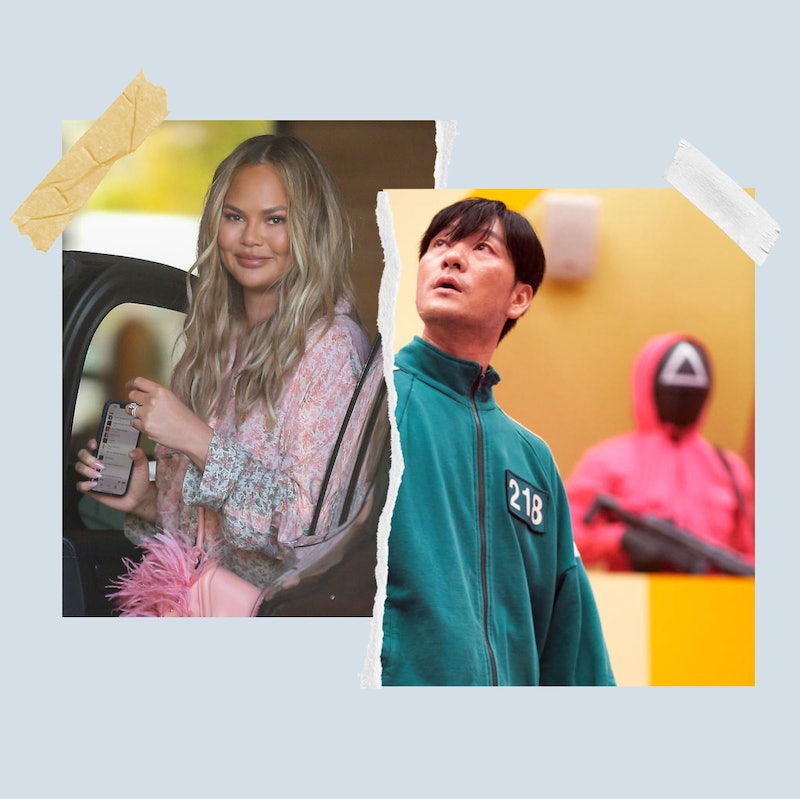 Whether you loved Squid Game’s stylized, high-stakes storytelling, or connected with its grimly relatable premise, one thing is clear: The show continues to dominate the pop culture conversation. Two months after the global phenomenon dropped on Netflix — and one month since it surpassed Bridgerton to become the streamer’s most popular program ever — Squid Game can count many celebrities as fans, including Cardi B, Billie Eilish, and Chrissy Teigen. The latter recently threw a Squid Game-themed party that is now receiving backlash.

“Where do I even begin!! what an absolutely epic night,” Teigen captioned a gallery of party photos on Nov. 13. “My dream came true of watching my friends fight to the death! dunk tank, musical chairs, hide and seek followed by a very riveting final game of pin the tail on the donkey.”

Among the Instagram photos are shots of Teigen dressed up as the terrifying robot doll (the Cravings author, fittingly, leafs through a cookbook in one snap), tracksuit-clad guests reaching for a gold piggy bank, and a server dressed as a guard from the games. Fortunately, Teigen’s party didn’t employ the life-or-death stakes from Squid Game, but it did end with a big gift for the winner: not 45.6 billion won, but a flight to Napa and dinner for two at French Laundry.

Event planner Wife of the Party, who Teigen tagged in her post, shared what seem to be additional photos of the party — including walls designed to look like the Squid Game staircase, and large gift boxes reminiscent of the coffins used for slain players on the show.

For many Twitter users, there was something off about the event. For all its style and thrills, Squid Game is, at heart, a series about inequality under capitalism — as creator Hwang Dong-hyuk told The Guardian, “We are fighting for our lives in very unequal circumstances.” So wealthy celebs putting their own spin on Squid Game are sort of missing the point, as several users put it.

More like this
Twitter Is Burning As Phoebe Dynevor Reveals Daphne’s 'Bridgerton' Exit
By Sophie McEvoy
Ashton Kutcher Wants Danny Masterson “To Be Found Innocent” In Rape Retrial
By Jake Viswanath
'The Queen’s Gambit' Season 2 Tweet Wasn’t From Anya Taylor-Joy
By Mary Kate McGrath, Jack Irvin and Grace Wehniainen
'The Crown' Season 6 Has Suspended Filming "Out Of Respect" For The Queen's Death
By Bustle Staff
Get Even More From Bustle — Sign Up For The Newsletter
From hair trends to relationship advice, our daily newsletter has everything you need to sound like a person who’s on TikTok, even if you aren’t.