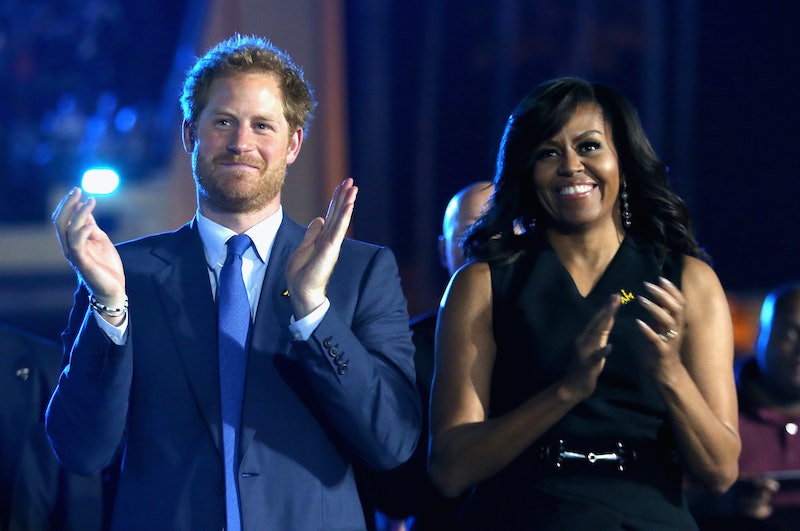 More than a week after Meghan Markle and Prince Harry’s major Oprah sit-down, you’d be hard-pressed to find a person on the planet without an opinion about it. Everyone from Suits costars to royal family members have weighed in on the conversation, which was full of revelations concerning the Sussexes’ exit from senior royal duties. Even former First Lady Michelle Obama spoke about Meghan and Harry’s Oprah interview this week while promoting her Netflix kids’ series, Waffles & Mochi.

During a recent appearance on Access Hollywood, Obama was asked about her thoughts concerning the couple’s tell-all. In true First Lady fashion, she kept her comments relatively well-mannered and neutral. “My hope is that, when I think about what they’re going through, I think about the importance of family and I just pray that there is forgiveness and there is clarity and love and resolve at some point in time,” Obama said, adding, “Because there’s nothing more important than family.”

As for the families in question — both Meghan’s and Prince Harry’s — their response to the interview has been less than enthusiastic. Buckingham Palace released a short statement that didn’t specifically address any of Meghan and Harry’s claims of a “toxic” environment. Instead, the Firm’s statement read that “The whole family is saddened to learn the full extent of how challenging the last few years have been for Harry and Meghan,” later ensuring that “Harry, Meghan, and Archie will always be much loved family members.”

Meanwhile, both Meghan’s estranged father, Thomas, and estranged half-sister, Samantha, have aired their grievances with the Oprah sit-down. Thomas called the interview “over the top” and “disappointing” during a chat with Good Morning Britain while Samantha spoke to Australian radio show Fifi, Fev, and Nick, alleging Meghan has “narcissistic personality disorder.”

Inflammatory family reactions aside, Obama has crossed paths with Prince Harry and Meghan Markle before. Obama joined Harry in Toronto for the Invictus Games back in 2017. She also participated in the September issue of British Vogue that Meghan guest-edited in 2019, offering written answers to interview questions from the Duchess. In that interview, Obama spoke about the advice she’d offer her daughters Sasha and Malia, a motto that echos in Meghan’s own decision to speak out. “What I hope my daughters will realize a little earlier is that there is no prescribed path, that it’s OK to swerve, and that the confidence they need to recognize that will come with time,” she said.