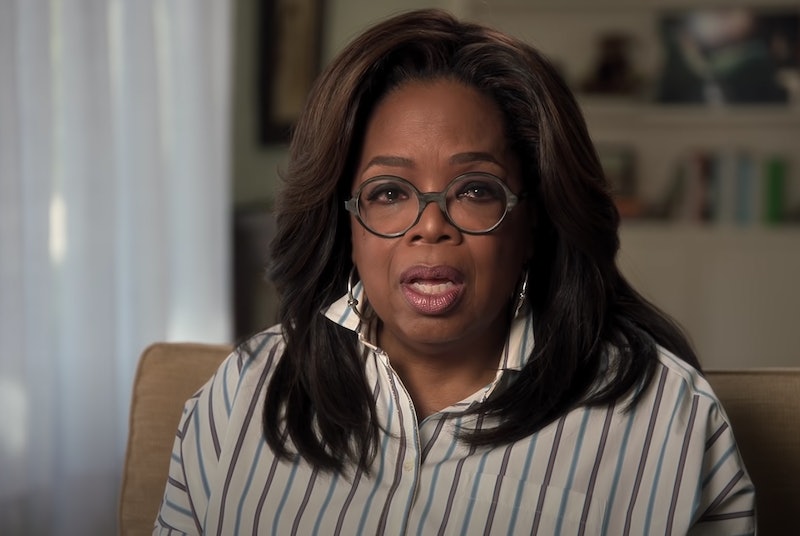 Oprah Winfrey and Prince Harry have a new docuseries out called The Me You Can’t See that focuses on mental health, and it features celebrities like Lady Gaga and Glenn Close opening up about past struggles and how they’ve managed to stay healthy. As part of the program, Winfrey and Harry both shared their own traumatic experiences, with the former talk show host revealing some truly disturbing trauma from her childhood.

“At 9, 10, 11, and 12 years old, I was raped by my 19-year-old cousin,” the business mogul shared. “I didn’t know what rape was. I had no idea what sex was. I had no idea what was happening to me.” Winfrey eventually became emotional, tearing up as she continued to discuss the sexual abuse she faced. “I kept that secret ... it’s just something I accepted, that a girl child isn’t safe in a world full of men.”

Winfrey admitted that during her incredibly tough time as a girl, what “saved” her was her teachers, and she loved going to school. “For so many years in my life that’s the only place I ever really felt loved,” the television legend shared, not hiding her emotion. “It’s the reason why for so many years I wanted to be a teacher, to be able to give to other kids what my teachers had given to me.”

Winfrey spoke about the documentary and the sexual abuse in this interview with TODAY:

Sadly, the abuse young Winfrey faced wasn’t the only traumatic incident she recalled in The Me You Can’t See. She also candidly about the fact that the hurt that has stuck with her the most after so many years is her move from Mississippi to Milwaukee. What made the trek so difficult is that she left her grandmother, who had raised her, and moved in with a mother she didn’t know very well. When she arrived, the living situation was fraught with racism, and she was treated horrifically.

“That very first night, she wouldn’t let me come in the house,” Winfrey explained about a woman her mother was living with who had lighter skin than she did. “There was a little porch foyer that was exposed to the street, and I had to sleep out there on a sofa.” Making matters worse, apparently, was the fact that Oprah’s mother didn’t do anything to stand up for her daughter at the time. “I knew I was alone.”

The Me You Can't See launched on Apple TV+ on May 21, and even though it’s only been out for less than a full day, it is seemingly all the internet can talk about. The program’s web page describes it as featuring “illuminating stories from across the globe, giving us an opportunity to seek truth, understanding, and a newfound hope for the future.”

In addition to Oprah’s revelations, fellow co-executive producer and co-creator Prince Harry also took his turn opening up, and during his time on camera he discussed his past abuse drugs and alcohol, how he regrets not standing up to the racism his wife faced, as well as the fact that the royal family denied his partner help when she was considering committing suicide.

More like this
'Bachelorette' Vet Clare Crawley Revealed Her Stunning Wedding Photos
By Stephanie Topacio Long
Paris Hilton & Carter Reum’s Relationship Timeline Includes A 2023 Grammys Date Night
By Bustle Editors
Everything To Know About 'RHOSLC' Season 4
By Jake Viswanath
'RHOSLC’s Heather & Whitney Are Still On A “Friendship Break” After Season 3 Reunion
By Jake Viswanath
Get Even More From Bustle — Sign Up For The Newsletter
From hair trends to relationship advice, our daily newsletter has everything you need to sound like a person who’s on TikTok, even if you aren’t.