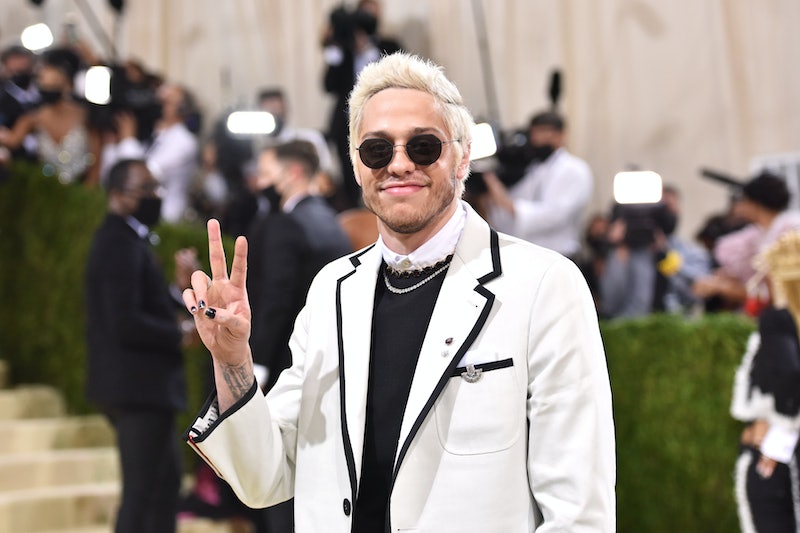 The time has finally come: Pete Davidson is back on Instagram after a four-year-long social media hiatus. The Saturday Night Live star, who’s currently dating Kim Kardashian, rejoined the platform on Wednesday, Feb. 16, under the handle @pmd. The comedian has already amassed over 600K followers and was quickly verified with a blue tick. But fans would likely agree that the best part about Davidson’s return is that he’s only following a total of two — yes, two — people.

It doesn’t come as a total shock that Kardashian is one of the people that Davidson is following. The SNL cast member has been romantically linked to the 41-year-old reality star since October when she hosted the show. Over the last several months, the two have been spotted on many romantic date nights in New York City and Los Angeles. And in a recent interview on People (The TV Show!), the 28-year-old referred to the SKIMS founder as his girlfriend for the first time ever.

READ NEXT: Why Kim Kardashian Unfollow Kanye West On Instagram

The second person that Davidson followed is a bit random. For reasons we are not quite sure of, the King of Staten Island star decided to follow Captain America actor Sebastian Stan. Fans on Twitter were very confused by this decision, especially since they had no idea Davidson and Stan knew each other. “Yall why is Pete Davidson following Sebastian Stan,” Twitter user @peachteamami asked. “Omg is there going to be a project?”

Whether they have a project in the works or not, folks on Twitter loved that Davidson followed the Avengers: Endgame star. “The fact Pete Davidson is back on Instagram and the only other account he follows is Sebastian Stan is so funny to me,” @megann_duff tweeted. Several other fans echoed that sentiment. “Pete Davidson joined Instagram to follow only his girlfriend and Sebastian Stan? Understandable,” @AsmiAparajita wrote.

As delighted as fans are that the comedian has returned to the platform, they’re also bracing themselves for drama. Kanye West, who has been desperately trying to reconcile with Kardashian, attacked Davidson on social media on Sunday, Feb. 13. In addition to calling him a “d*ckhead,” West said that Davidson would never meet his children and spread a baseless rumor that the comedian once sent Mac Miller explicit photos of his ex-fiancée, Ariana Grande.

Fans were also very surprised that Davidson decided to return to the platform amid so much drama. In the past, he has been very vocal about the negative impact social media has had on his mental health. “No there’s nothing wrong. No nothing happened. No there’s nothing cryptic about anything,” he wrote in a statement to fans before quitting social media in 2018. “I just don't wanna be on Instagram anymore. Or on any social media platform.”

“The internet is an evil place and it doesn’t make me feel good,” Davidson continued. “Why should I spend any time on negative energy when my real life is f*cking lit.” Despite all of the negativity, the comedian told fans that he would likely return to the platform eventually. “The fact that I even have to say this proves my point,” he continued. “I love you all and I’m sure I’ll be back at some point.”

More like this
Who Is Pete Davidson Dating? He "Courted" Emily Ratajkowski At A Knicks Game
By Jake Viswanath
Kim Kardashian & Tristan Thompson Had An "Inspiring" Thanksgiving Celebration
By Brad Witter
Kim K Is Putting Kanye’s Memorabilia — Like Grammys & Clothes — In A Vault
By Jake Viswanath
Adam Driver & Joanne Tucker’s Relationship Timeline Starts With Cheese
By Jordyn Tilchen
Get Even More From Bustle — Sign Up For The Newsletter