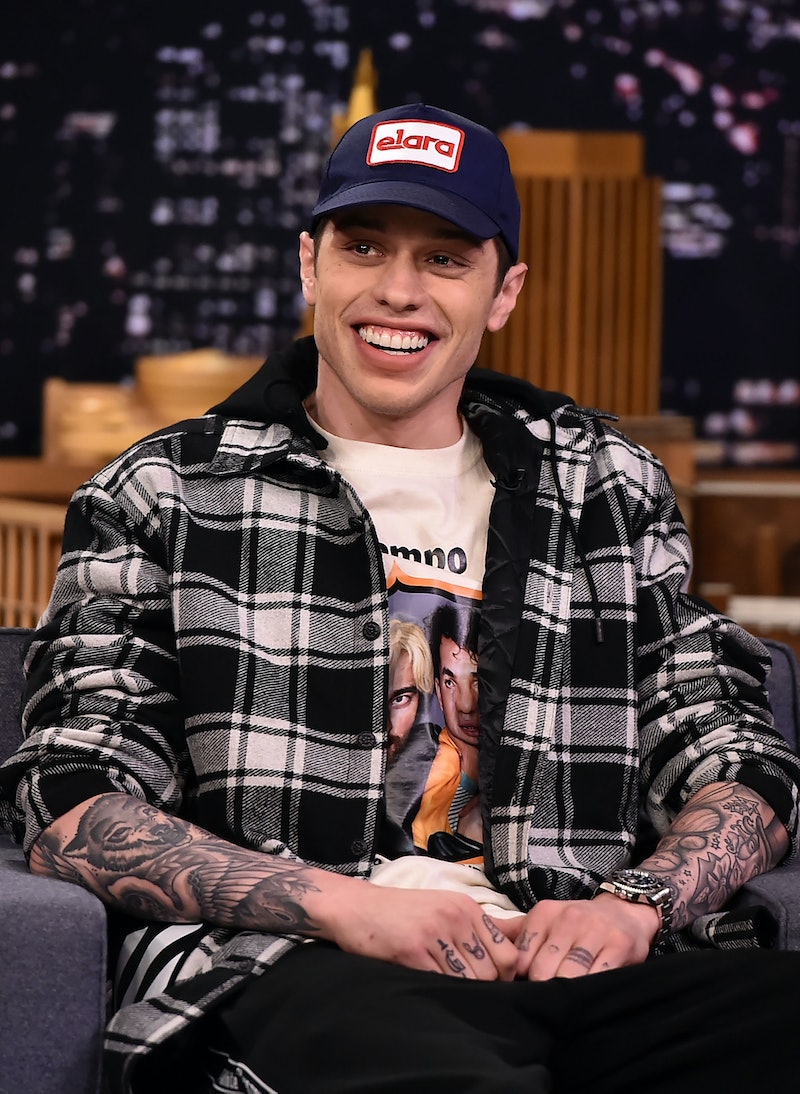 Another day, another celebrity deleting Instagram posts. On Monday, Pete Davidson removed his Instagram photos, and now fans have a lot of questions about the decision. Is it for creative purposes? Is it because he simply wants to start fresh? Does it have to do with the recent backlash Davidson faced for a comment he left on Ariana Grande's Instagram honoring her late grandfather? At this point in time, the answer remains unclear. (Bustle reached out to Davidson's rep for comment, but did not receive an immediate response.)

UPDATE: Pete Davidson has uploaded the following statement to his Instagram Story on Monday, July 23, explaining why he deleted his Instagram feed: "no there's nothing wrong. no nothing happened. no there's nothing cryptic about anything. I just don't wanna be on instagram anymore. or on any social media. the internet is an evil place and it doesn't make me feel good. why should i spend any time on negative energy when my real life is f*cking lit. the fact that i even have to say this proves my point. i love you all and i'm sure i'll be back at some point :) your neighborhood goon, pete"

EARLIER: As if that isn't enough, fans are also saying Grande turned off her Instagram comments, which is confusing them even further. (Bustle reached out to Grande's rep for comment, but didn't receive an immediate response.) In this day and age, no one, especially celebrities, seems to be able to get away with making these kinds of changes on social media without someone noticing. Most recently, Miley Cyrus deleted her Instagram photos, and people continue to be mystified by her actions.

Fans are, of course, responding to Davidson wiping his Instagram clean and Grande reportedly disabling her Instagram comments. Mainly, everyone wants answers immediately, but neither of them have offered any explanation as of yet. Here's a screenshot of what Davidson's Instagram page currently looks like:

In response, here are just a few of the many tweets that have popped up.

All Caps Is Necessary

It's A Huge Mystery

It's too much to handle.

This person wants people to keep their opinions to themselves and let them live their lives.

It's time to relax.

This Is All That Matters

Why can't they be happy?

It's All Just Too Much

Again, neither Davidson nor the "No Tears Left To Cry" singer have explained their actions, but many are assuming it's in response to the negativity the Saturday Night Live star received for his comment on a photo of Grande and her grandfather, who died from cancer in 2014. On July 22, she shared an image of him in his hospital bed and wrote, "miss n love u forever my best friend #4years."

As reported by Elle, Davidson commented, "omg what a cutie," which didn't sit well with fans. Many thought the comedian was referring to Grande and accused him of being inappropriate. In response to one Instagram user criticizing him, Davidson replied, "Are you guys all insane? I was talking about how cute her grandpa is. What's wrong with that? You guys will really look for anything to attack people. It's sad." According to Elle, Davidson also commented "goals" on another picture Grande shared of her grandparents, which she captioned, "forever n then some."

Ever since Grande and Davidson started dating and then got engaged, they've been under a microscope. It felt like their relationship came out of nowhere, not to mention after recent breakups. After almost two years of dating, Grande confirmed her breakup with Mac Miller on May 10. Not long after on May 16, Davidson revealed his breakup with Cazzie David, who he dated for two years. When Grande and Davidson went public with their romance, fans became beyond invested.

The singer and actor certainly haven't been able to escape the scrutiny, which may or may not be the reason behind Davidson removing his photos and Grande reportedly turning off her comments. On Monday, Grande also tweeted, "the energy u put out is exactly what u get back, please create a beautiful life for yourselves." It's unclear to what she's referring to, but she definitely makes an important point.